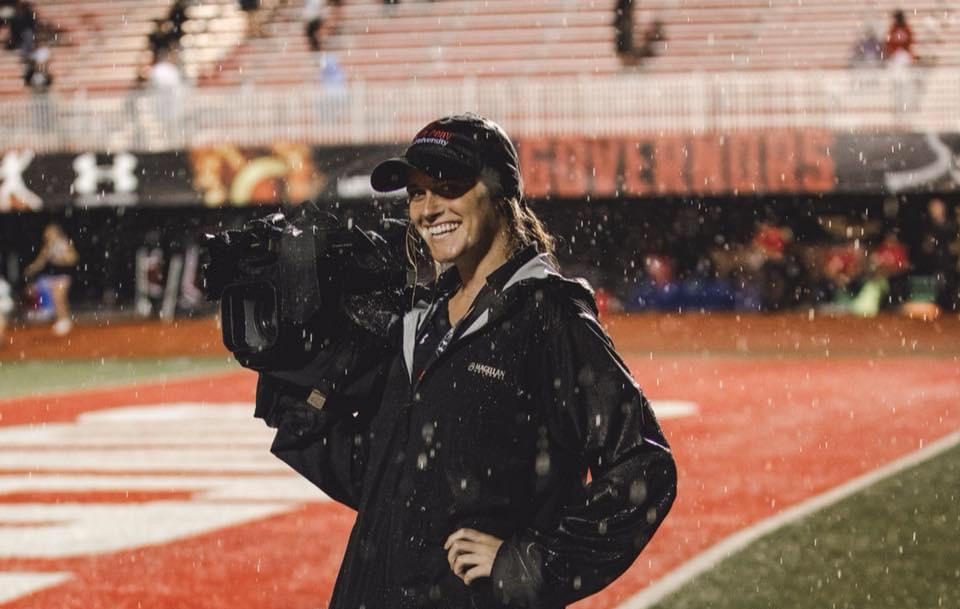 Fulfilling a lifelong passion for sports, Taylor Wiseman finds a home in broadcast operations at Northwestern

From the moment Taylor Wiseman started walking, no one could keep her away from sports.

As a young kid, Wiseman watched her dad play soccer in an adult league, and her mom would have to chase her off the field, she said. As a toddler, Wiseman began playing soccer, too — a hobby that would last through college. And as she grew up, her Texas family all gathered to watch Cowboys, Longhorns and Spurs games.

“Sports have just kind of been a part of my life forever,” Wiseman said.

Since October, Wiseman has worked as the assistant director of live event production in Northwestern’s broadcast operations department. But before landing on sports videography, she tried out a few different paths.

As a freshman at St. Edward’s University in Austin, where she played on the soccer team, Wiseman wanted to be a physical therapist. She said she liked the idea of helping people get back to their favorite sport, but the more she thought about it, the more she realized it wasn’t something she wanted to do for the next 40 years.

So, she transferred from St. Edward’s — first to Oklahoma State, then to the University of Texas at Austin — and tried out sports broadcasting, hoping to be on a show at some point.

Upon graduating in 2016, Wiseman looked for any job in sports broadcasting and ultimately found an 11-month internship at Louisiana Tech. The role allowed her to report on screen, but it also gave her the chance to film games and do live production in the control room.

“In that year, as much as I enjoyed being in front of the camera, I found that I really, really loved being behind the camera and telling the story of the student-athlete,” she said.

Beyond her talent for sharing those stories, Wiseman’s former boss David Pillen said he admired Wiseman’s willingness to help out the department in whatever way she could.

He recalled one moment when Wiseman traveled with the football team to Texas Tech. The night before the game, the athletic director had a dinner and needed someone to watch his kids.

“When the athletic director comes to you and says, ‘Hey, can you essentially babysit my kids for the night,’ that’s pretty cool that not only he trusted her to do that, (but) on top of it, she was willing to do it,” Pillen said.

Around the time her internship at Louisiana Tech ended, Pillen heard the athletic department at Austin Peay State University was looking to create a new director of video services position — and he recommended Wiseman.

She got the position, packed her bags and moved to Tennessee, where she spent the next two years. After learning more about the creative side of video, Wiseman was ready for the next step.

“I knew that I still had so much to learn in this industry, and I really wanted to…be able to learn under some of the best in the business,” she said. “For me, Northwestern was a place that I had always looked to (and thought), ‘You know, they’re doing everything right.’”

Wiseman had applied for a position at Northwestern when she was leaving Louisiana Tech, but didn’t get the job. However, she continued to keep up with NU and said getting this position felt very full-circle.

Though her day-to-day tasks vary, they often include some combination of brainstorming content ideas with colleagues, filming interviews with students or editing videos.

“Part of the role that we hired Taylor for was going to be a little bit of a stretch for her and be some new experiences for her,” he said. “She embraced the challenge of what we were asking her to do, she came in with an open mind wanting to learn…which I think is really just a testament to her work ethic and again how much passion she brings for what she does.”

One of Wiseman’s favorite videos she’s made thus far was a feature on freshman guard Kaylah Rainey of women’s basketball and her journey learning about her heart condition during her senior year of high school.

“People don’t always realize what some of these student-athletes go through to get back to the sport that they love,” Wiseman said. “Having a chance to sit down and talk with her and just see her determination…was really cool for me.”

Another big part of Wiseman’s job is working in the control room on game days. Her role there includes pushing out sponsored elements or features — like a video asking players who the best singer on the team is or clips of players lip reading — onto the video board and helping ensure that the livestream of the event is running smoothly.

Though Wiseman is the only woman in the broadcasting operations department — and has been one of the few women in her previous departments — she said she’s never felt like her gender has affected how her colleagues treat her. She added that there have always been women in other departments she’s worked alongside that she could look up to and befriend.

One person she’s become close to at Northwestern is assistant director of communications Brittany Mann. Mann said the two hit it off instantly and she felt like she’s known Wiseman longer than seven months.

“We spend so much time together in work that we’ve developed a friendship,” Mann said. “We joke around a lot — we watch a lot of the same TV shows, so we’ll text each other and be like ‘Oh my gosh, did you see what happened?’ But that makes the working relationship better just because we know each other and it’s easier to bounce ideas off each other (and) be there to support each other.”

Since the pandemic hit, Wiseman has continued creating videos with her department, focusing on teams whose spring seasons were cut short. Though accessing large video files on the department’s server remotely has posed a challenge for the broadcast team, Coons said Wiseman has done a good job at adapting and finding creative ways to produce high-quality content.

Wiseman said she’s not sure what her future holds, but she’s excited to learn more from all her colleagues at Northwestern.

“I’ve learned so much in my short time here, and I’ve just scratched the surface,” she said. “I’m really happy with where I’m at right now.”