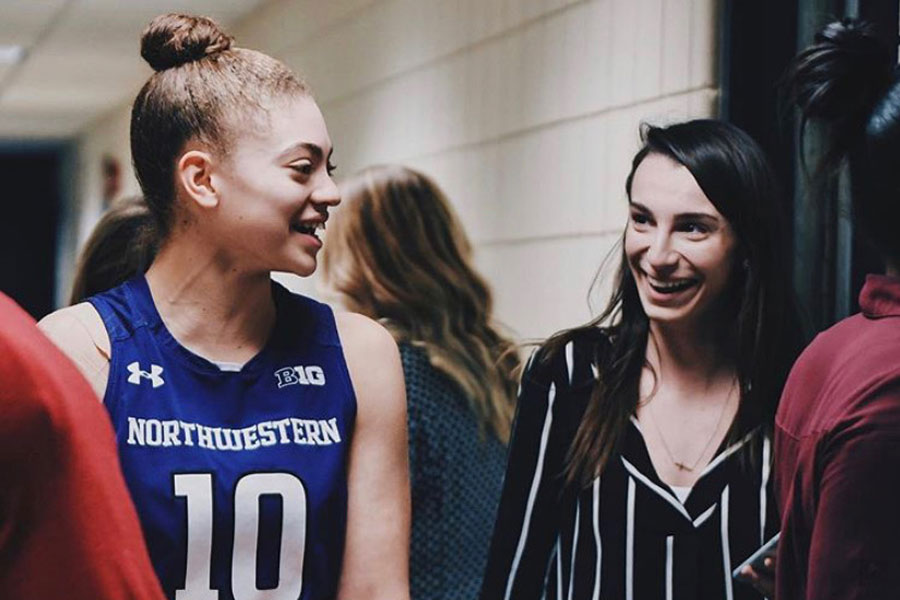 Ever since high school, Northwestern assistant director of athletic communications Hope Carpinello knew she wanted to work in sports — just not in what capacity.

She’d spent her childhood and teenage years watching her little brother, Casey, play basketball and her older sister, Katy, cheer. Carpinello herself played volleyball throughout high school, but when college rolled around, she wanted to try something else.

During her first two years at Florida State, Carpinello tested out a variety of sports-related roles, like radio broadcasting and sports writing for the student newspaper. She wondered if she wanted to be the next Samantha Ponder or Maria Taylor. But nothing seemed to click.

Things changed in the summer after her sophomore year. Carpinello had an internship at The Palm Beach Post, a newspaper in south Florida, and the person who worked beside her was the FSU beat writer. He asked if she knew about sports information, and when she didn’t, he introduced her to the director of the department at Florida State.

From then on, Carpinello worked as a sports information intern at the university, assisting with the basketball and football operations.

“I thought, ‘I’m good at this,’” Carpinello said. “I just (got) to sit and watch sports and interact with people, and that was something I think I’ve always been good at — just building relationships with people.”

Christa Salerno, an assistant sports information director who oversees the internship program at FSU, said she appreciated Carpinello’s “good personality” as well as her hard-working and dependable demeanor.

At the Orange Bowl in 2016, just days after Christmas, Carpinello and the Florida State staff were there to show tournament representatives around the stadium. When a Florida State sports information director didn’t know where to go, she was able to step in and direct them.

“It made our experience at the Orange Bowl a lot less stressed,” Salerno said.

After graduating, Carpinello took on a bigger role with the Orange Bowl, serving as their communications assistant. For 10 months, she did everything from creating game programs to working with public relations to coordinating press releases.

Once that internship ended, the Florida native searched for jobs in her home state or in the Chicago area, a place she’d become familiar with since her boyfriend studied at Wheaton College. The Big Ten’s Bob Hammel Communications Internship, a yearlong position in Illinois, caught her eye. But despite making it to the interview process, Carpinello didn’t get the job.

However, she didn’t have to wait much longer for her next opportunity — and it was from a familiar face. The day after that interview, Big Ten assistant commissioner/communications Jason Yellin, who interviewed her, called Carpinello and said he wanted to be a resource for her since she’d impressed him in their conversation. A few days after that, the position at NU opened up.

“I came here, I met all the people here, and what we do in this department is so different than your stereotypical SID work.” Carpinello said. “The communications department is so innovative — we’re always looking to do the next great thing…. And that’s why, as soon as I got here, I was like, ‘I want this job, I want to work here.’”

Carpinello officially stepped into her role at NU in October 2018 and has loved it ever since.

Her day-to-day is never the same. Some days she doesn’t sit at her desk until 2 p.m., others she’s there constantly and others she’s not there at all. A day could consist of taking headshots for the cross country team, supporting men’s basketball during their practice, updating the website and coordinating interviews between the press, coaches and athletes.

“Sometimes you don’t get as much sleep as you’d like,” Carpinello said. “But that’s what coffee’s for.”

Despite her busy schedule, Carpinello said the people she works with — both the student-athletes and her colleagues in the communications department — make it worthwhile.

“She brings high energy every day to the office,” Mallik said. “It’s always fun being around her. It makes coming to this job…enjoyable.”

But beyond her personality, Mallik said Carpinello has brought an important perspective to the communications department.

“(She) gave us a fresh outlook,” Mallik said. “You think about stuff in the sports world very differently when it’s all men and it’s a very white, male-dominated community. She’s held us accountable and helped us be responsible about how we treat everyone.”

Carpinello said that being a female in a male-dominated industry has been challenging at times.

As a result, she’d be especially hard on herself if she made a mistake, especially while in college. And more recently, a fan asked her if she only had the job at NU because she’s a woman.

Carpinello doesn’t know what’s the next step in her career, but she’s very happy at NU. She’s also glad to be surrounded by sports every day.