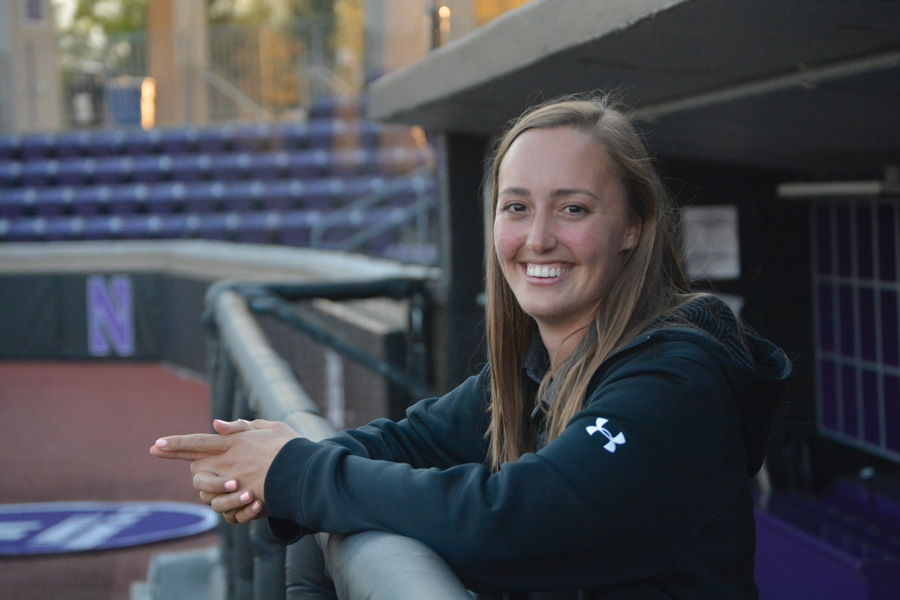 Allyson Darragh in the Northwestern dugout. Darragh is in her fourth year as the Wildcats’ director of baseball operations. (Peter Warren/Daily Senior Staffer)

Allyson Darragh in the Northwestern dugout. Darragh is in her fourth year as the Wildcats’ director of baseball operations.

When Allyson Darragh was in high school, she would sneak into her school’s press box to update the scoreboard during every baseball game.

“I loved the head coach, (but) he did not allow females to be managers, so this was my contribution,” she said. “It seems silly, but I just wanted to be a part of it.”

Darragh’s love for the sport started at a young age after constantly watching her older brothers play Little League and the Boston Red Sox — her family’s favorite team — play in the majors.

Though she never played baseball, Darragh’s appreciation for the game developed as she got older, she said, and her desire to be around it grew.

Now the director of baseball operations at Northwestern, Darragh spends her days working in the sport she loves. She organizes logistics for the Wildcats’ away games, plans alumni weekends and fundraisers and assists with recruiting visits. The Indiana native also serves as the liaison between the coaching staff and external departments like academics, marketing, communications and development.

“The coaches focus on everything in the lines, like literally on the field, and I am everything outside the lines,” Darragh said.

Darragh first stepped into the world of baseball operations as a freshman at St. Mary’s College in Notre Dame, Indiana. Though St. Mary’s had no baseball team, Notre Dame — located across the street — did, and they accepted female managers.

Before she even arrived on campus, Darragh set up an appointment with head coach Mik Aoki to see how she could assist the team. The coaching staff decided to take her on and help with video analysis. While everyone was outside for practice, Darragh stayed inside, learning video software and tagging games. Her knowledge of the software earned her the chance to travel with the team to every away game, since she knew it better than the rest of the staff.

When Notre Dame joined the ACC during Darragh’s junior year, the team hired Tad Skelley as its director of baseball operations. Skelley oversaw Darragh as a student manager for two seasons and said she flourished, despite being the only woman on the male-dominated staff.

“It didn’t matter that she was a female,” Skelley said. “It mattered that she understood the game, and she worked really hard and she had a really big passion for baseball.”

Skelley was the one to bring Darragh to NU after he took the volunteer assistant coach position under head coach Spencer Allen in 2016.

Allen said he hired Darragh because he found her organizational skills and eagerness to join the staff impressive, adding that she’s strengthened the program over the past few years.

“She’s just challenged us not to accept mediocrity — that’s the biggest thing,” Allen said. “She wants the guys to have a good experience, and she knows pushing in other areas is ultimately going to give them a good experience. She’s, overall, a great person.”

Darragh said she’s learned a lot about the game during her tenure at NU that she didn’t realize as a fan. In particular, she’s learned more about pitching and hitting mechanics, pitch sequencing or — from a scout’s perspective — what to look for in a player in terms of off-the-field makeup.

Her favorite part about the job now, though, is her connections with the players.

“There’s just a mutual respect between us,” Darragh said. “I respect the hell out of what they do every day, and they respect me making their lives a little easier — or trying to, at least.”

Junior third baseman Charlie Maxwell said he and the other players think of Darragh as a sister.

“She keeps us in check when we get a little out of line, and she’s there when we need her,” he said. “She’s (also) the best organizer I’ve met — she’s an organizational wizard.”

Darragh said being the only female on the staff was strange when she first started the job, since she was only 22, the same age as a fifth-year senior at the time. The director of baseball operations position was also a new role, so the players didn’t understand what her purpose was either.

But now, Darragh said she doesn’t mind being the only woman.

“The players don’t treat me differently than they do the other coaches,” she said. “You just have to be able to ‘hang,’ as they say.”

Though she is happy with her job at the moment, Darragh said she thought she’d be doing herself a “disservice” if she didn’t try to work on the professional side of the game at some point.

Even if she doesn’t know exactly how she wants her career to pan out, she said she knows she wants it to include baseball.

“I just love being around it,” Darragh said. “There’s not anything specific about the game. It just feels like home — it’s family to me.”