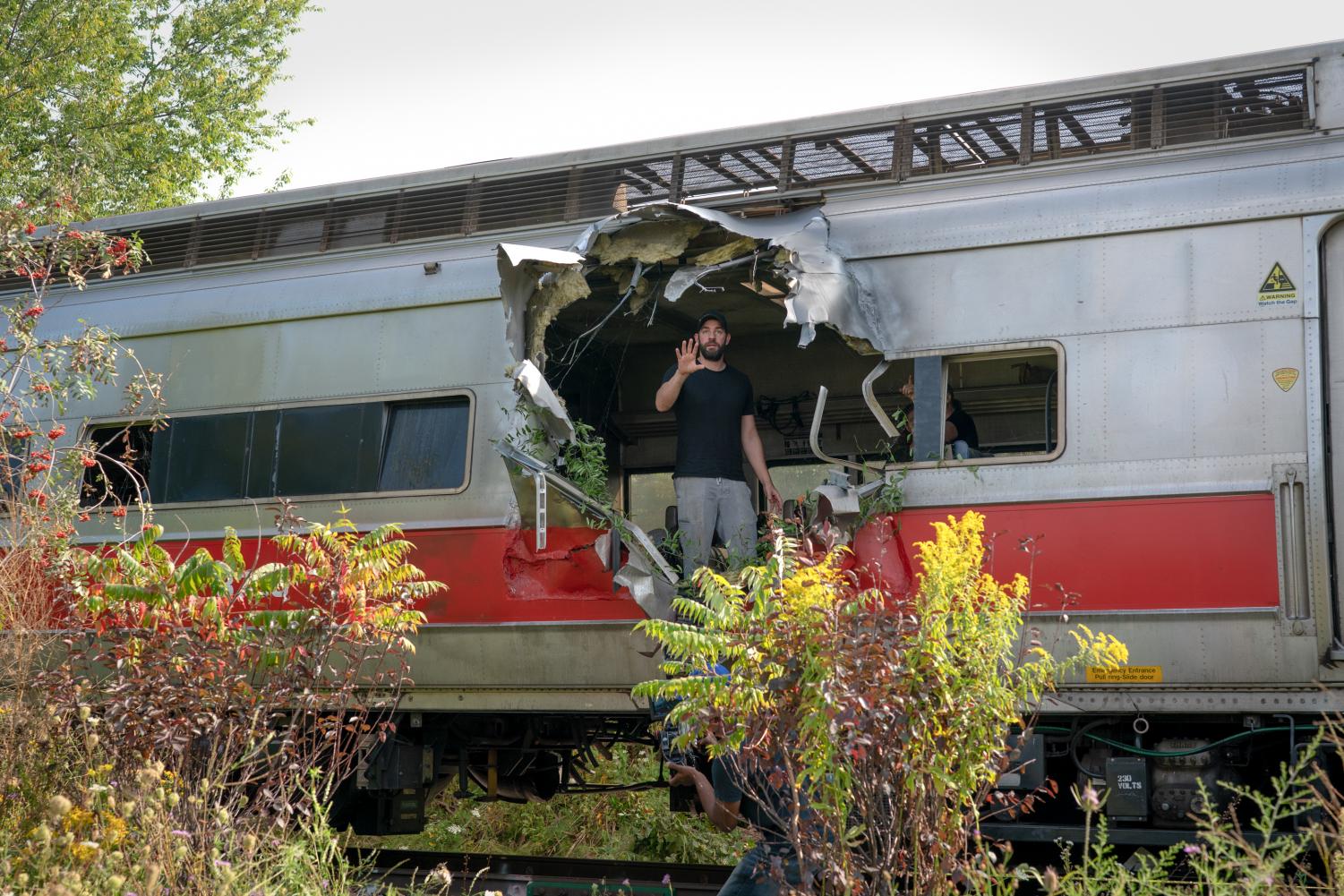 Krasinski on the set of “A Quiet Place: Part II.” The horror sequel is directed by John Krasinski, who described the popular series as a metaphor for parenting. (Courtesy of Mike Gifford)

Krasinski on the set of “A Quiet Place: Part II.” The horror sequel is directed by John Krasinski, who described the popular series as a metaphor for parenting.

You’ve seen him on your Facebook feed during quarantine for “Some Good News” and on Netflix during your latest binge of “The Office,” but John Krasinski doesn’t just do virtual proms and harmless pranks. The director, writer and star of award-winning horror movie “A Quiet Place” is back on board to write and direct the film’s sequel, but this time (spoiler alert!) without his own character. Originally set to premiere in the US on March 20, the film’s release was postponed until Sept. 4 due to the coronavirus pandemic. Krasinski sat down with The Daily to chat about the expectations of sequels, his view of parenting and why he wants to continue making horror films in the future.

The interview, which 12 school publications participated in, has been edited for clarity.

Q: Sequels have a reputation for not living up to the original films. Did this discourage you from making this film or affect the way you approached making it?
A: It affected me by being the exact terrifying thing I needed. Basically, the studio asked to do a sequel and I very quickly said no. I know as an audience member I am very weary of sequels. Then basically they were starting to talk about (having) another director and writer and I had this small idea to have Millie [Simmonds] be the lead of our movie … so I realized that I can make this a continuation and a further expansion of the metaphor I was going for in the first one, which was parenthood. The first movie is about that promise you make to your kids as a parent: as long as you stay close to me, I can protect you forever. Every parent knows that that’s a false promise, and one day that promise will be broken, and I think when that promise is broken, I believe that’s what growing up is.

Q: You made the decision to work opposite your wife, Emily Blunt, in the film. As two parents already, what is it like to transition from being husband and wife in real life to the screen?
A: Well, I think the parenting thing was pretty easy. We’re luckily on the same page at home, so I hoped we’d be on the same page of fake parenting as much as we are in real parenting. It was actually the relationship on set and the working relationship that we were most nervous about. I’d be honest and say that we were both kind of terrified about it. Who’s to say we were going to collaborate well? What if we butt heads a whole lot? It turned out to be the exact opposite. She is without a doubt the greatest collaborator I’ve ever worked with and … she’s actually one of the smartest people that I’ve worked with creatively. I felt like I had my producer, co-director, co-writer, and star all in one person.

Q: In the sequel, how does the family maintain that same closeness and intimacy as they leave the farm and the scope of the story widens considerably?
A: When I decided the only way to get into the second one was to have Millie be the lead character, it wasn’t just because I thought Millie would pull off an amazing job — which she clearly does — it was more that her character has this amazing opportunity to relive and reuse and recycle all these beautiful things we were using in the first one. She really becomes my character and so much more. As a parent who cries at everything, I cried everyday writing the script because I just thought about that imprint you hope you leave on your kids that they will not only be everything you hope they will, but that they will actually exceed your expectations at every turn. So if the first movie was a love letter to my kids about what I see parenting being encapsulated as, I would say the second movie is a letter I wrote to them about all my hopes and dreams and what they could be. I hope … in these dark, dark times that they would be the brave ones to light a candle in the middle of all that darkness.
Q: A really big part of the first film is the use of sign language. Have you gotten a response from the deaf community since the first film?
A: I can’t speak to how people feel about how they are being represented. I hope they feel like they’re being represented as respectfully as possible. It’s certainly the reason why it was non-negotiable for me to cast a deaf actress; not only would I get a more organic performance out of someone who actually lives through an experience that way every single day, but I also had a guide who was able to walk me through what it’s like to be the only deaf member of a family, as Millie is. I got to talk through all the emotions, all the frustrations. Certainly in the first movie I find Millie’s character to be insanely heroic. In the second movie you’ll see her as that, times a billion. I’d never see it as, ‘I have a deaf actress in my movie.’ I always see it as, ‘I have one of the best actresses working today in my movie,’ and that’s my advantage.
Q: With the traction horror movies have gained in recent years, do you plan to make more films in that genre?
A: I was not a huge horror fan before I directed this first movie. I was too much of a scaredy-cat. I was definitely still reliving the early ’90s when I was just watching slasher movies in a basement with some friends. In my research for the first one I realized two things: one, I’m so bummed that I was late to this party because it’s such a great party, and two, how ignorant I was to be so judgmental of horror and genre. I realized that the storytelling medium might be the best genre to tell stories because you’re able to bend reality in a way that allows people to examine the world in a way that’s not too in their face. I think “Let the Right One In” is one of my favorite movies I’ve ever seen. “The Witch” and “Get Out,” all these things are doing much more than just trying to scare you. So would I do it again? I hope so, because it’s probably one of the most fun things I’ve ever done in my career.