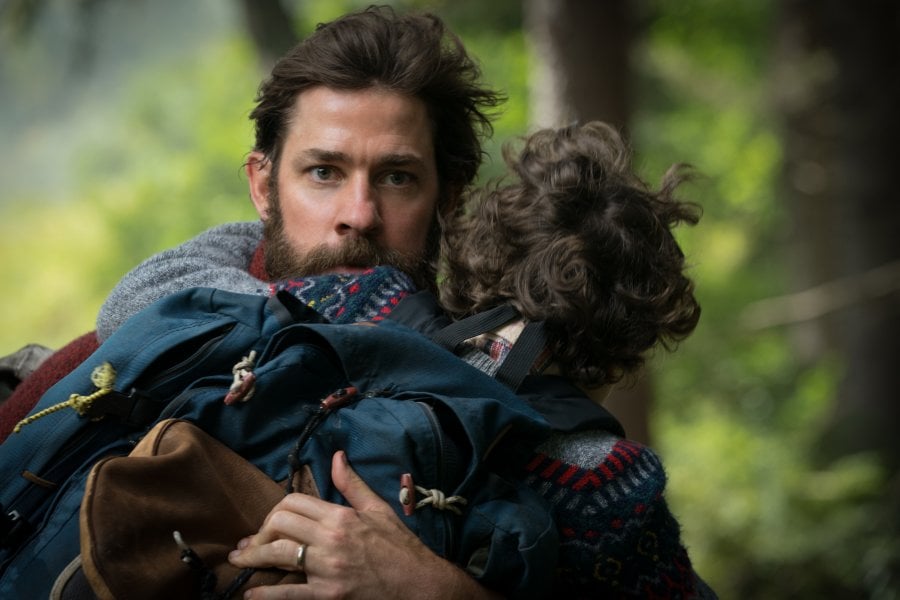 John Krasinski in his newest movie, “A Quiet Place.” Krasinski directed, wrote and starred in the film. ((Source: Jonny Cournoyer))

John Krasinski in his newest movie, “A Quiet Place.” Krasinski directed, wrote and starred in the film.

The only man more charming than Jim from “The Office” might just be the guy who played him.

A perpetual inviting smile on his face, John Krasinski peppers a Skype interview about his new film, “A Quiet Place,” with emphatic exclamations of “Great question!” and has a genuine candor when talking about his love for his wife — actress Emily Blunt — and children. And if his amiable charisma weren’t enough, he’s sensitive too. In a recent profile on Blunt in Vanity Fair, Krasinski admitted to crying when he heard his wife sing for the first time, saying, “It was like finding out your wife could levitate.”

The sunny Krasinski is taking a turn toward the dark side this spring with the release of “A Quiet Place.” The plot follows a family who must remain quiet at all costs to hide from creatures that hunt solely through sound.

While Krasinski recently took a turn toward the dramatic in his career, most notably in Michael Bay’s “13 Hours,” this is his first foray into the horror genre. This is unsurprising, as Krasinski is a self-proclaimed “scaredy cat” who hated horror movies before working on this film.

While he’s usually not one for a scare, there was something about the family dynamic in the script that attracted him, he said. Krasinski came upon the story shortly after the birth of his second daughter, and said he identified with what the parents in the script felt.

“I was already in the state of terror of keeping (my daughter) safe … and whether or not I was a good enough father to be her father,” he told The Daily. “In comes this script about a family that relies on each other, about parents that would do absolutely anything for their kids. It doesn’t take a lot for me to cry, but I was wide open for this one and it connected to me in a big way.”

Krasinski loved the story so much, he decided to go all in with the project. Not only does he play the father, he also serves as one of the screenwriters and the director: the first time he’s worn all three hats at the same time. Krasinski said he approached the film not with the intention to create scares, but rather to tell the story as honestly as possible. His goal: to make audiences fall in love with the family on screen to generate genuine fear for their wellbeing.

Krasinski’s own family has a big part in the movie, with Blunt co-starring as his on-screen wife. Krasinski said he knew he wanted his wife to play the part as soon as he read the script, but was nervous about asking her.

Luckily, Blunt came to love the story as much as her husband. After reading the script, she said in the same Vanity Fair interview that she knew she had to play the part.

“I had this overwhelming feeling of ‘I don’t want anybody else to play this part,’” she said. “I said, ‘Would you feel weird if I did the movie with you?’ And (Krasinski) broke out into this sort of ecstatic smile.”

Despite initial trepidations about working with his wife, Krasinski said he’s never had a better on-screen partner. And Blunt didn’t stay out of the creative process, either. Before filming started, the pair made sure to have conversations about what their ideas and thoughts were on the project to make sure they were on the same page. Krasinski said this was similar to their philosophy on their marriage: they talk about everything to avoid miscommunication and fighting.

Describing the film as “a love letter to his kids,” Krasinski said he’s never gone so “all-in” before on a project. And critics are resonating with his artistic vision. “A Quiet Place” currently holds a 96 percent rating on Rotten Tomatoes, and grossed $50 million at the box office on opening weekend, sailing past industry expectations of $25 million, according to figures from measurement firm ComScore. New York Times critic Jeannette Catsoulis had kind words to say about Krasinski’s work.

“Mr. Krasinski … directs with skill and restraint,” she said in her review. “He knows that when the sound is turned down, we lean in, and he forces us to pay attention to facial expressions in a way that hearing audiences are rarely required to do.”

Of course, in a world where any noise is potentially deadly, sound — or the lack thereof — is a running motif throughout the film. The family uses a range of sound-dampening techniques to avoid the predatory creatures, such as paths of sand that muffle footsteps, strung lights that can be used as a warning system, and a soundproof room for when Blunt’s character gives birth in a world distinctly unfriendly for screaming babies.

The family’s greatest survival strength is their knowledge of American Sign Language, as a result of having a deaf daughter. Krasinski said it was essential to cast a deaf actress in the part, and was blown away by the work done by Millicent Simmonds. Simmonds played a major role in helping the rest of the cast learn ASL. Krasinski regrets not learning more of it, though, as he finds it the “most beautiful language in the world” due to its nuances, something Simmonds pointed out to him early in the process.

“(She) said, ‘Well, the father is a guy who doesn’t care about anything in the world but keeping people safe, so all of his signs are very curt and short,’” he said. “Emily’s character is trying to give these kids a much bigger life. So hers are much more poetic and gesture-y.”

Working on a nearly silent set for so long has made Krasinski appreciate all the little sounds in nature that usually go unnoticed. In a world of technology and distractions, he said people can often miss all the sounds that make up what we call ambient noise. Shooting in a “silent” forest, though, made him recognize just how much of our auditory world there is to discover when people learn to be quiet.

Krasinski found surrounding himself with these natural sounds so powerful that he’s begun to take his daughter out to fields to “get rid of all the distractions” and “just look up at the sky and listen.”

“Now she actually asks me to do that,” he said. “She’s like, ‘let’s go out to the lawn and look up at the sky,’ and she’ll say, ‘Look there’s a bird and there’s a plane.’ And I’m like, ‘I know, and there’s Superman.’ It’s not a joke that she understands yet, but she’ll get there.”