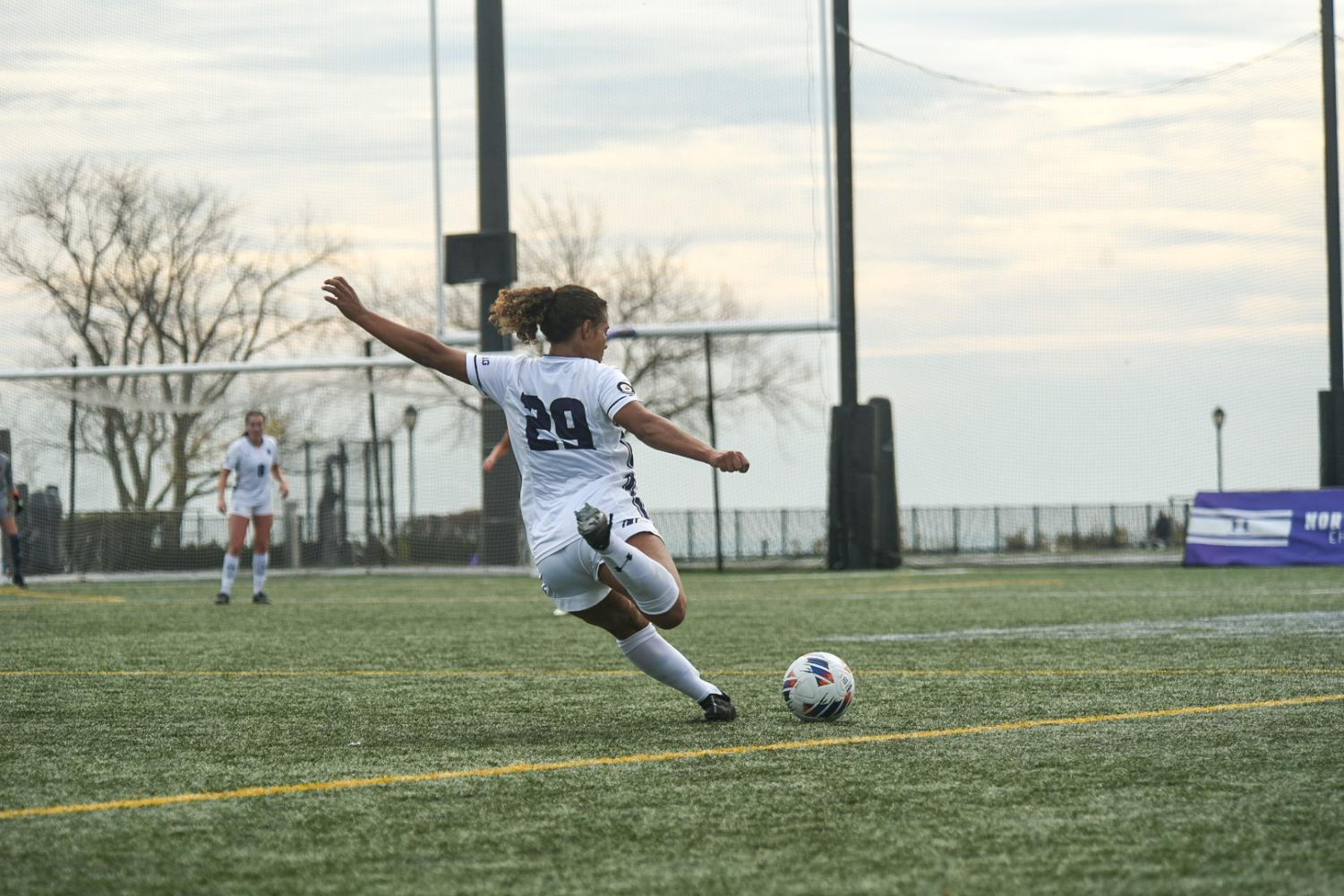 Danika Austin kicks the ball. The Michigan native was a key component of Northwestern’s stellar 2022 season.

The joy was palpable when Northwestern defeated Stanford in September.

Teammates embraced, traded high fives and shed tears. After last recording a winning season in 2018, the Wildcats had come out on top in two ranked games just weeks into the season.

Senior defender Danika Austin was stoic during the game, anchoring the back line and helping NU to a shutout. When the clock finally hit zero, waves of happiness crashed over her.

“That was a big statement for us to show that we’re in all these games,” Austin said. “We’re here to play. We’re not here to be a blow off team. People need to be ready to play us.”

Just over a week later, Austin was named to the Top Drawer Soccer National Women’s Team of the Week. She was instrumental throughout the Cats’ 2022 campaign, starting every matchup and providing a veteran presence on the back line.

Coach Michael Moynihan said Austin has long carried high standards like taking accountability for her actions, being responsible and not making excuses. She has held her teammates to these same standards as she’s become a leader, Moynihan said.

While NU’s postseason ride ended with a loss against UCLA in Sunday’s Sweet 16, Austin played a critical role in leading the Cats to their best season in recent memory. NU finished with 16 wins, tying a program-high, and earned a No. 4 seed in the NCAA Tournament — its highest in program history.

Austin’s journey to dominating the field at NU began as a young girl who, more than anything, wanted to be like her brother.

Mario Austin, her father, remembered she used to follow her brother around, trying to be just like him. Austin chased a soccer ball around when she was as young as two, Mario said.

“She wasn’t a girl who played with dolls,” Mario said. “She pretty much played with the ball or toys or other people … She always liked to run around and play with her older brother.”

Beyond imitating her brother, Austin’s family fostered a love of competition from a young age. M. Austin said they would play games like cards and cribbage.

Austin said she fell in love with soccer as she watched her brother compete. As she kept playing, she realized her skills and how much she enjoyed scoring.

Her athletic ventures weren’t limited to soccer. Growing up, Austin ran cross country and track, and also tried volleyball and basketball. She continued with basketball into high school, balancing it with a rigorous soccer schedule.

Austin first met Brad VanTimmeren, her basketball coach at Jenison High School, when she attended his camps as a young girl. Even then, VanTimmeren said Austin stood out as someone who routinely attended and worked hard.

She was athletic, but that wasn’t what set her apart on the court, VanTimmeren said.

“Her advantage is her desire to compete,” he said. “She’s very determined to beat her opponent. That’s part of what I love about her. That’s what’s made her so successful and so enjoyable to coach.”

Austin was constantly busy in high school managing her basketball and soccer schedules. She said some days she would go to basketball practice after school, rush home to eat and then go straight to practice for her travel soccer team. Being on the go was fun, Austin said, as she enjoyed the competition and being with her teammates.

Playing college basketball was never on the table for Austin. But the sport taught her about the importance of maintaining energy and working to be the best player she could.

Jenison’s basketball program was often the underdog. However, during Austin’s time on the team, it recorded its first winning season in years. VanTimmeren said Austin’s ability to make others around her better and her competitiveness were key to fostering a winning environment.

“When you have a player like that in your huddle, in your locker room, that’s gonna change the program,” VanTimmeren said. “They only come around (once in a while). They’re unique.”

After committing to NU early in high school, Austin arrived in Evanston in 2019. Several key players graduated that spring, Austin said, and the program was relatively young.

Like her high school basketball days, Austin focused on being the best player she could be — and it paid off. She started in 17 games as a freshman, ranking fourth on the team in minutes played.

Moynihan said some tactical aspects were new to Austin when she arrived in Evanston. She put in more time with the ball to adjust and become more comfortable with these skills, Moynihan said.

As a freshman, Austin said she felt hesitant at times. But she’s grown more confident over the years, and has a strong desire to constantly make an impact — whether on the field or cheering on her teammates in practice.

Now, serving as a captain, Austin said she works to build that confidence in others. Over the off-season, she and her teammates tried to create a positive, uplifting atmosphere.

As the Cats reached new heights in 2022, Austin was an important anchor. Her competitive nature on the field and joyful nature off of it has earned the respect of her teammates and others in life.

On the field, Moynihan said he enjoys watching her “impressive” ability to recover and run people off the ball. Her father said she has a great sense of humor and appreciates her ability to laugh at herself. Her mother, Kathy Austin, said she also appreciates Austin’s humor and likes to tease her daughter about her poor dancing abilities.

For VanTimmeren, NU’s achievement this season is inevitable — after all, Austin is involved.