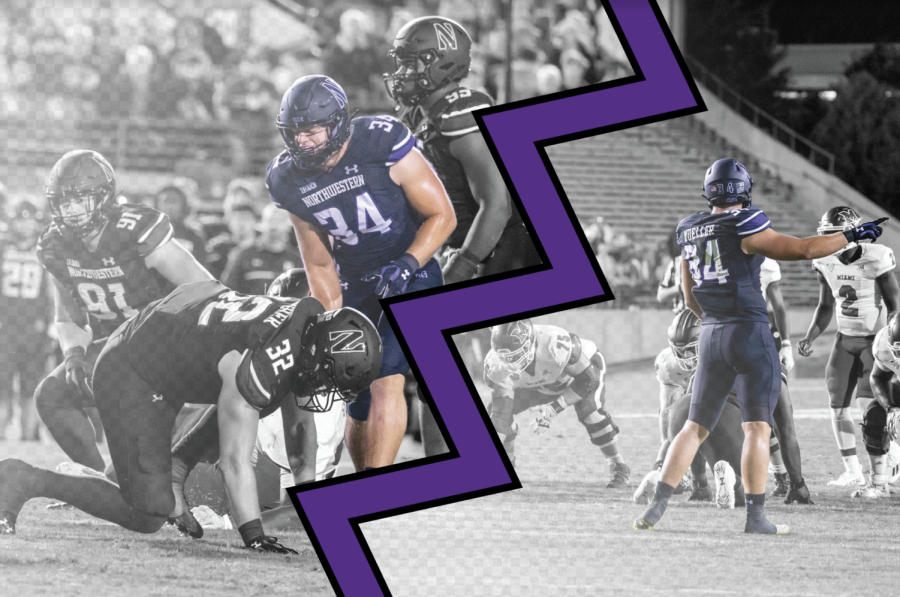 Xander Mueller has risen through the ranks, now is a starting linebacker for Northwestern, and is making an impact.

Football: “You earn what you work for”: How Xander Mueller followed his brother’s footsteps and earned a crucial role on Northwestern’s defense

The linebacker position has always been a strength for Northwestern’s defense.

From the recently departed “Irish Law Firm” in Chris Bergin, Blake Gallagher and Paddy Fisher to coach Pat Fitzgerald and linebacker coach Tim McGarigle in the 90s and early 2000s, the list goes on and on.

But it wasn’t just hard work that set these greats apart. It was their ability to make plays in crucial situations. Thanks to plays like Fitzgerald’s leading effort against No. 7 Michigan to stop running back Tim Biakabutuka at the goal line and Gallagher’s interception with less than two minutes left to beat Iowa in 2020, linebacker play has been central to the defense’s pristine reputation.

Now, Fitzgerald and McGarigle may see another linebacker rise to the occasion as the Wildcats (1-3, 1-0 Big Ten) prepare to face off against Nebraska and Southern Illinois: junior linebacker Xander Mueller.

“He just has taken the mindset of getting one day better and one game better,” McGarigle said. “You have to be confident and you have to work and you have to understand what’s going on, and he’s done that.”

A star on special teams with stints as a linebacker during his first two years, Mueller saw the fruits of his labor pay off this season by earning a starting role. With less than 90 seconds left in NU’s season opener against Nebraska, the Cats carried a three-point lead over the Cornhuskers as Nebraska attempted its best impression of a two-minute drill.

After one first down, Nebraska quarterback Casey Thompson’s high-pointed pass tipped off wide receiver Wyatt Liewer’s hands and into a sliding Mueller’s arms.

“We always talk about just getting to the ball,” Mueller said. “All training camp that’s one of the biggest things we talk about. It could be anyone, everyone’s trying to get to the ball, I just got a couple lucky bounces.”

Since high school, Mueller’s older brother Erik always had a feeling his younger brother would be a better football player than him.

And Mueller thought so too, even going so far as to commemorate his brother’s birthday with a post reading, “Happy birthday to the second-best linebacker in the family.”

However, the two never had the opportunity to put this to the test. A three-year age difference meant different teams, friend groups and an unanswered question of who was the best.

Still, the brothers made their dream of playing together a reality during Erik’s senior year at NU, when Mueller joined the football program as a freshman — and both brothers played linebacker.

“(It) was such a surreal experience and just something that I had only dreamed about as a kid,” Erik said. “That shared experience of football and being together at that level and the amount of effort and commitment that goes into that really helped bring us closer.”

College has brought the two together outside of football as well. While at NU, Erik pursued pre-med and is now at a medical college in Wisconsin, while Mueller is currently majoring in engineering.

Erik expressed the importance of sacrifice and discipline his parents instilled in him and his brother, both having to manage football and academics.

“He sticks to his routine and he does what he needs to do every single day,” Erik said of Mueller. “It was kind of a cornerstone of what we were raised … that you earn what you work for.”

Erik began as a walk-on in the football program, but through hard work and efforts on special teams he was eventually rewarded with a scholarship.

And with Erik being a veteran in the linebacker corps when Mueller was a freshman, not only did he show his younger brother “how awesome this place is,” but he continued to be the person he looked up to his entire life.

“One of the main reasons I am here is because of him,” Mueller said. “That gives me confidence that I can play linebacker here and follow in his footsteps.”

With the season in full swing, Erik said he watches every game and talks to his younger brother nearly every week to discuss his performance.

And through these conversations and in-game experiences, Erik has witnessed strides his brother has taken. Or at least, he’s heard about them over the phone.

“He has such good instincts and he’s such a smart football player,” Erik said. “We’re both seeing the fruits of that labor now as he’s getting the opportunity to start for the Cats.”

From being selected as a PFF Team of the Week selection against Nebraska to leading the team with 2.5 tackles for loss and NU’s lone interception versus Southern Illinois, Mueller has quickly made a name for himself.

And with the Cats traveling to Happy Valley this weekend to resume Big Ten play against No. 11 Penn State (4-0, 1-0 Big Ten), Mueller and his counterpart Gallagher’s play are more important than ever.

Alongside the scoring and competitive differences in Big Ten and non conference opponents, Mueller added that fast-paced games and the physicality gap is something new he has seen in his first year as a starter. This is an aspect of the game Fitzgerald said the Nittany Lions excel in, a team that averages 38.8 points per game.

But Fitzgerald, a 1995 and 1996 two-time consensus All-American linebacker, said more time and reps will only result in continued progress for the junior.

“He’s made a handful of important plays for us,” Fitzgerald said. “I’m really pleased with his initial start here, and I just can’t wait to watch his career progress.”

With the Cats looking to break their three-game losing streak as they face one of the top teams in the country, it all starts with the defense. And it can’t be done without the individuals in the middle — the linebackers.

With the experience of playing under great linebackers, being coached by some and leading the team in tackles for losses (eighth in the Big Ten) a week ago, Mueller has the motor and mentality to help lead the charge in turning the Cats early season woes around.

“Learning from them and from my linebacker coach has definitely been the biggest part of any kind of success I’ve had,” Mueller said. “Each of us has to step into their role. We’ve definitely gotten more comfortable with doing our job, and that’s something we need to emphasize going into next week.”

– Football: What to Watch For: Northwestern heads to Happy Valley amid depressing three-game skid

– Football: “A modern take on a historic look”: Behind the scenes of Northwestern’s offseason uniform upgrade