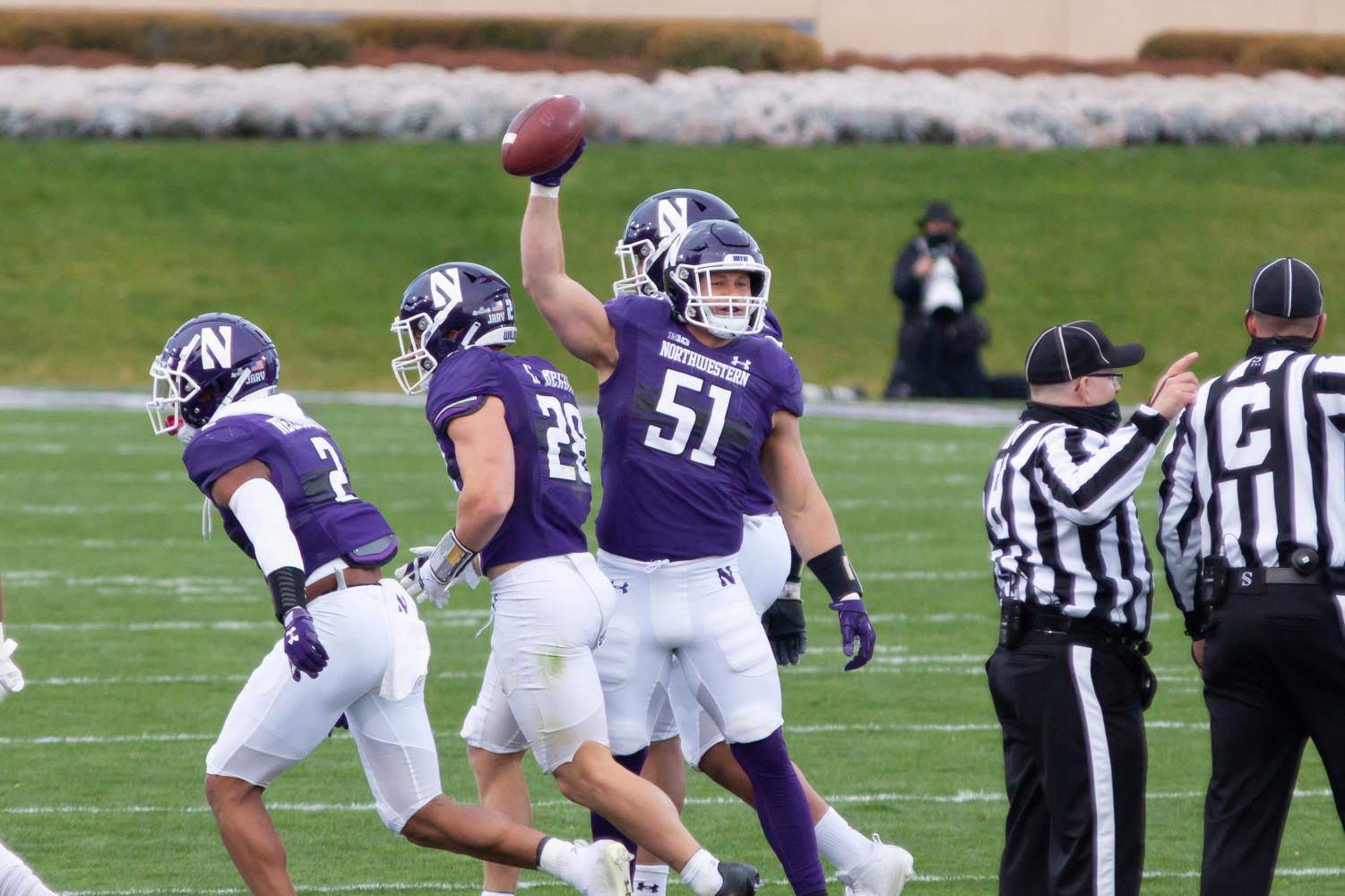 Northwestern’s trio of linebackers celebrates after forcing a turnover against Wisconsin. (Joshua Hoffman)

Northwestern’s trio of linebackers celebrates after forcing a turnover against Wisconsin.

Just six minutes into Northwestern’s biggest game of the season against No. 10 Wisconsin, with the Wildcats up 7-0 thanks to a touchdown score on their first possession, senior linebacker Blake Gallagher made a play that showed off his skill and heart.

As Badgers running back Garret Groshek took off with the ball, senior linebacker Paddy Fisher hit him hard, knocking the pigskin loose onto the grass of Ryan Field. Gallagher, already on the ground, bear-crawled to the football in the middle of the fray and snatched it.

“It feels good to take the ball away,” Gallagher said after the game.

Fisher, Gallagher and fellow senior linebacker Chris Bergin make up one of the best linebacker trios in the country. The Cats are the only Power Five team with three active linebackers each with at least 200 career tackles.

They call themselves the Irish Law Firm. Bergin said the nickname originated with his dad and is an ode to the “Irish lineage” that extends to coach Pat Fitzgerald and linebackers coach Tim McGarigle.

“We were three linebackers that love to play some ball and make some tackles, all with Irish descent,” Fisher said.

The Irish Law Firm is a fearsome defensive unit which has wreaked havoc on opponents offensive lines and quarterbacks. The Cats have the No. 20 ranked run defense in the country and are 15th best in total defense, thanks in part to this group’s play and leadership.

Gallagher leads the team with 8.5 tackles for loss on the season[CQ] The trio leads the Cats in tackles, with Bergin’s 54 behind only Gallagher’s 59 and Fisher’s 58.

The trio will share the field as starters for the seventh time this season on Saturday against Illinois. Fisher said they’re together at the facility “pretty much all day.” But each of them bring their own personalities to the table.

“We’re all three pretty different,” Fisher said. “Chris is an interesting dude. He loves to talk and use mental warfare. Blake’s a bulldog. He’s hard-headed. He’ll hit you in the mouth and he doesn’t care. He’s a bad sucker. Me, I’m more relaxed out of football, have the opportunity to flip that switch when it comes time to cross the white lines.”

Fisher’s the one with a national profile. The three-star recruit from Katy, Texas has been a mainstay in NFL Draft circles since bursting onto the scene with 113 tackles in his first full season at NU, tops among all FBS freshmen. He’s currently the NCAA’s active leader in career tackles and forced fumbles.

He’s finished second on the team in tackles the last two seasons, behind Gallagher both times. They’re competitive with each other. Every game this season, Fisher, Gallagher and Bergin hold a side competition to see who among them would finish the day with the most tackles.

“I think we’re just having fun with it,” Fisher said. “After the game we see who had the most tackles and talk a little mess to each other afterwards.”

College football’s king of the forced fumble, Fisher entered the season with lots of hype as a Walter Camp Preseason All-American and a place on the Butkus Award Watch List. He’s lived up to it. Fisher combined for 24 tackles against Iowa and Nebraska, the third time in his career he’s recorded at least ten tackles in back-to-back games. His interception against Michigan State, the fourth of his career, almost helped NU to a victory in East Lansing.

Fisher’s been in Evanston the longest. As a freshman, he hosted then-recruit Blake Gallagher on a campus visit, and sold him on the future of the program. Gallagher and Bergin would join the team together before 2017, and they’ve built a bond since.

“Just being around each other throughout the last few years has really paid dividends to our work on the field,” Fisher said. “Just building relationships on and off the field, growing and maturing together. Growing through hardships, failures and successes too, everything that’s bringing us together.”

The Irish Law Firm doesn’t need to look hard for inspiration. Standing at 5-foot-11 and weighing just 215 pounds, Bergin is almost half a foot shorter and 25 pounds lighter than Fisher. You wouldn’t know it based on how he plays. Bergin broke the 200-tackle plateau this season, and already had 5 pass deflections through six games.

“We kind of always pride ourselves on a business mindset,” Bergin said. “Every aspect of the game, sort of going out and serving justice to people. We wear our work boots everyday we go out there, it’s a grittier firm but we all just kind of loved it. We’ve stuck with it ever since. It hasn’t really changed our mindset but it just fit so well with what we’d already been doing.”

His path to stardom with the Cats has been different than the other two. Bergin, a walk-on when he began his collegiate career, followed his older brother and fellow walk-on Joe to Evanston.

“My dad told me when I got to college, he said: ‘Listen, everyone’s a walk-on when you step on campus it’s those who don’t know who are in trouble.’ I really like that because we’re all equals once we get here,” Bergin said. “It’s kind of been my mindset since I’ve been here.”

Bergin’s work paid off this past week in a Burlsworth Trophy nomination, an award annually given to the most outstanding player who started his career as a walk-on.

The recognition pushed Bergin into seeing his career from a different perspective.

“Sometimes I forget that I was a walk-on,” Bergin said. “Just because of how good a treatment I’ve received in this program. That mindset of expect nothing, earn everything is something I’ll approach life with. It’s been so productive and successful for me. It’s just a chip on your shoulder that will never go away.”

Gallagher remembers the disruption his team played with in 2018, when NU’s defense recorded 962 tackles and brought down 27 takeaways in 14 games en route to the first Big Ten West title in school history.

The following year, the defense struggled, forcing only 17 takeaways and losing nine of their 12 games. Gallagher made just 91 tackles after finishing with a career-high 127 in 2018.

Gallagher entered the season emphasizing a new mantra: “Bring your own juice.” He coined the term before fall training camp in an effort to raise his teammates’ energy levels despite a lack of fan support due to COVID-19 protocols.

“We worry about going out and doing what we do,” Gallagher said. “Going out and playing fast, playing physical and playing confident. That’s something we just continue to build on throughout the year.”

It’s a mentality that’s pushed Gallagher towards another successful season. He leads the NU defense in tackles, tackles for loss and is tied for second on the team with two sacks.

After dominating Wisconsin’s offensive line to the tune of 14 tackles and a sack, Gallagher was named the Player of the Week by both the Bednarik and Nagurski Award Committees. Fisher, who himself recorded 13 tackles against the Badgers, said the awards confirm what the Cats have long known about Gallagher and his talent.

“I love it,” Fisher said. “It’s huge and well deserved. He’s awesome as a person and as a player. He’s been playing lights out, not even this year but in years prior. I think the media is really a little late to the table because I’ve seen him play extremely well the past couple years.”

“The heartbeat of our team”

Fitzgerald was a two-time All-American linebacker at Northwestern in the 1990ss, leading the Cats to a Cinderella Rose Bowl run in the 1995 season. He said each member of the Irish Law Firm is better than he ever was.

“It’s not even close,” Fitzgerald said. “All three of these guys are a million times better athletes than I ever wish I could have been.”

There’s a shared bond that comes when a coach works with pupils at his former position, a more nuanced understanding of the position. Fitzgerald can understand why and how four years of experience have made the trio better.

They’ve led the line for the Cats’ defense, which has propelled NU into next week’s Big Ten Championship Game. And they’ve redefined the trajectory of a program that has forever played the underdog role.

Before the Irish Law Firm came to Evanston, NU had never won its conference. The Cats are now Big Ten West Champions for the second time in three seasons. Wins against Illinois Saturday and Ohio State next week could put NU in the Rose Bowl for the first time since Fitzgerald took his team there 25 years ago.

“It sends the message that we’re a legitimate contender for the Big Ten Championship and a dominant team in the west,” Fisher said. “Our hard work and the culture of this program has been just tremendous. I think that speaks dividends.”