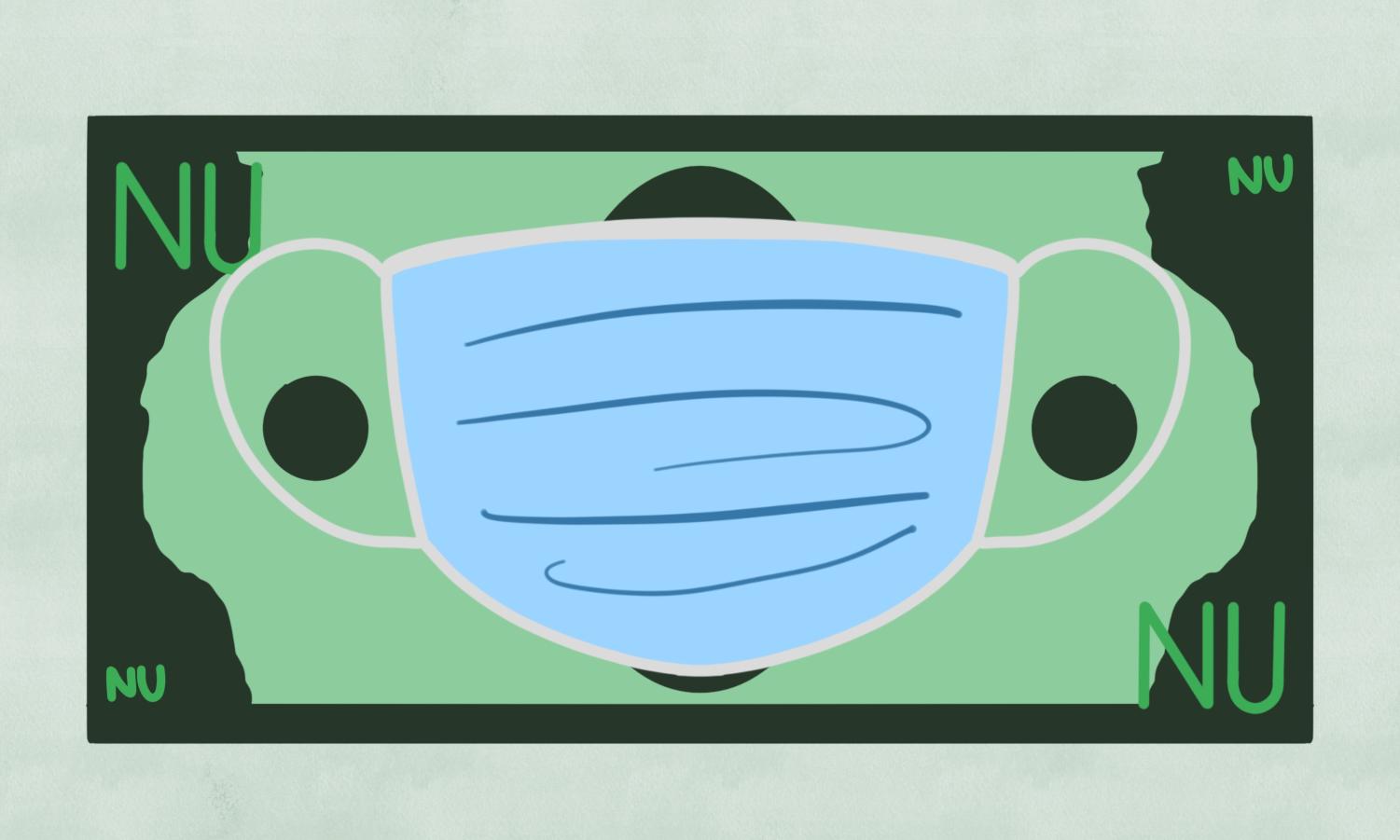 Some faculty said the University’s mission for education doesn’t align with its financial choices during the pandemic. (Illustration by Olivia Abeyta)

Some faculty said the University’s mission for education doesn’t align with its financial choices during the pandemic.

Unfulfilled demands: More than a year later, the fight for lost retirement contributions for faculty and staff continues

Early in the pandemic, art history Prof. Hannah Feldman said she and her coworkers struggled relationally, physically and psychologically.

“Most of us, especially women, were doing a lot more emotional work with our students,” Feldman said. “In my department, we worked all summer, which we’re technically not paid to do. After all of that, when we all redesigned syllabi, learned how to teach on Zoom, people home-schooled … it was awful.”

During this period, colleges and universities nationwide braced for fiscal deficits. At Northwestern, the projected loss — $90 million — led University President Morton Schapiro to announce a suspension of faculty retirement contributions on May 11, 2020.

Spanish and Portuguese Prof. Jorge Coronado, president of NU’s chapter of the American Association of University Professors, said a small group of faculty has consistently spoken out against the suspension.

“(The retirement cuts) were simply unilaterally announced with no consultation on the faculty (who disapproved) of that cut,” Coronado said.

Coronado said faculty grew more critical when the University announced an $83.4 million surplus for the 2020 fiscal year. NU resumed retirement contributions on Jan. 1, 2021, which Feldman said she thought meant it would return money lost during the pandemic.

But more than a year later, Feldman said the University has failed to recuperate these lost funds and communicate transparently about the retirement losses.

“We were incredulous and pretty angry,” Feldman said. “To realize that at the end of (all of this) money was earned and that we were not going to benefit — in fact, we’d actually lost money — from that kind of entitlement that the University experienced, it was really just depressing.”

Coronado said teaching contracts did not outline if the University could legally remove retirement funds in the case of financial exigency.

But even if NU made the cuts for that reason, Coronado said Schapiro’s May 2020 announcement came while the University was doing fine financially. According to the report, NU’s S&P 500 index, a gauge on capital availability and institutional holdings, was 11.64% higher in 2020 than the previous year.

“It was like somebody saying, ‘We’re gonna stop paying you because the company’s going bankrupt, but there’s no proof that the company went bankrupt,’” Coronado said. “In fact, everything would prove the opposite, that it’s actually doing quite well.”

In an email to The Daily, University spokesperson Erin Karter said NU can amend its retirement plan and suspend contributions as it deems appropriate, not limited to cases of financial exigency.

Karter said the University saved $22 million from suspending retirement contributions in 2020 but can’t reinstate them due to various tax laws and regulations.

On Dec. 7, 2020, the NU Chapter of the AAUP endorsed a report on the University’s COVID-19 response, detailing its lack of transparency with faculty and scrutinizing its suspension of funds.

“Faculty have become accustomed to the lack of consultation or even information about University decisions that affect our students and ourselves, and to which we are entitled,” the report read.

The final AAUP report was endorsed by 120 faculty and staff. Coronado said the association sent the report to Schapiro and University Provost Kathleen Hagerty but received no response.

At a May 2021 meeting, the Faculty Senate called for NU to provide benchmarks for University finances that would dictate when it suspends retirement funds. The Senate also passed a proposal for a rainy-day fund and asked for a restoration of lost retirement funds.

But in an April Faculty Senate meeting, Board of Trustees Chair J. Landis Martin said Senate leadership never communicated the recommendations to the board. Political science Prof. Jacqueline Stevens said the mistake points to larger issues in leadership.

“The leadership of the Faculty Senate is more concerned about being cozy with the administration than protecting the interests of the faculty, staff and students,” Stevens said. “Why didn’t they follow up on (the concerns)?”

Coronado said various barriers make it difficult for the AAUP to reach out to all faculty members. For example, the association can’t access University-wide email lists. Coronado said the AAUP is nevertheless ready to address the issue.

Merit raises and a one-time bonus

While the University has not recuperated retirement funds, it provided most eligible faculty and staff with a one-time bonus in August 2021.

NU has not said this bonus was granted to compensate faculty for lost retirement funds, but Karter said it was meant to recognize faulty contributions during a year of “unusual pressures and uncertainty.”

History Prof. Benjamin Frommer said the bonus was “significantly less” than typical retirement contributions and unlike contributions, it was subject to various taxes and withholdings. The University typically contributes 5% automatically and up to 5% matching contributions to faculty salaries for their retirement incomes — a combined annual contribution of up to 10%.

Given the University suspended contributions for about six months, Frommer said the loss was “essentially a 5% pay cut.”

“(Retirement funds) are important because they’re a fundamental part of employee compensation,” Frommer said. “They’re not fringe benefits, they’re not some sort of add-on.”

The pandemic followed a 2018 multimillion dollar deficit from the University, which resulted from overspending on financial aid, hiring high-profile faculty and establishing new construction projects. Feldman said this deficit led the University to freeze faculty and staff raises, which also affected many as inflation reached 7% in 2021.

Last year, Feldman said the University told teachers it would lift these freezes. Instead, the University offered merit raises, which she said reward certain faculty at the expense of others.

Merit raises are given to faculty who take on additional duties, like publishing books or engaging in service, Feldman said.

“The problem is it’s a self-perpetuating cycle because if you’re working more, you’re not publishing more and so therefore, you’re not as eligible to get merit raises because administrative work is often invisible,” Feldman said.

Stevens said NU’s financial pandemic response indicates the University is focusing more on branding and marketing, than on educating.

“What does it mean when the University endowment looks like it might be threatened?” Stevens said. “Is that endowment more important than the goal of education?”

Though the endowment and operating budget are separate, the endowment has been used to offset budgetary struggles. This was the case in 2020, when the endowment payout rate temporarily increased to 6 percent.

According to the 2021 Financial Report, about $3.38 billion unrestricted donor funds in the endowment are designated to teaching, research and program support.

The University’s focus on entrepreneurial initiatives and patent-making, among other research, is an investment in making more money, Feldman said.

Feldman said she struggles to teach curriculum that contradicts the values that NU projects.

“We’re trying to teach liberal arts … a lot of us teach history of socialism or decolonization, labor rights, feminism,” Feldman said. “We talk, but then we’re in a place that is not practicing or is practicing counter to the historical values we teach.”

Stevens said the lack of focus on students and faculty means NU is letting academics “wither.” The University is making the wrong investments, she added.

“They always say, ‘We need to save for a rainy day,’ (but) the students and the faculty are the rainy day,” Stevens said. “If they’re going to be investing in the future, they need to invest in the students, and to do that they need to invest in the educational infrastructure of the faculty and the staff and the resources that we need to educate people.”

— Northwestern to resume retirement contributions for faculty and staff on Jan. 1

— Endowments: What are they good for?