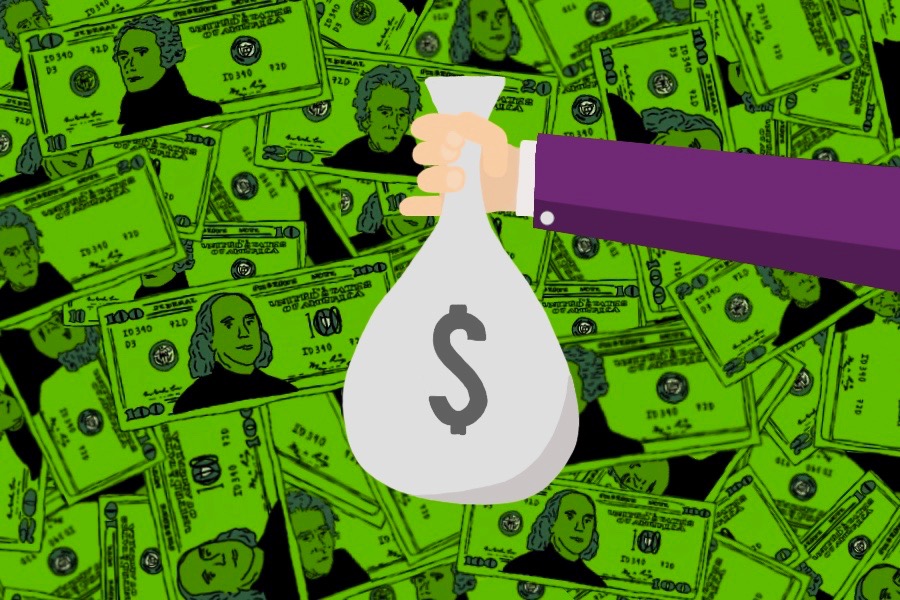 Endowments: What are they good for?

At its founding in 1851, Northwestern’s Charter created a corporation and a Board of Trustees authorized to “acquire, hold and convey property” so that Trustees, guided by prudence and a desire to bolster the University’s educational capacity, can “place out at interest, or otherwise depose of, ‘property.’”

Those words, written over 150 years ago, created the University’s endowment, a fund that grew to be worth over $11 billion, making it among the ten largest in the country. Managing the endowment is a critical priority — the University’s Investment Office employs 21 staff members just to manage the approximately five percent of the endowment not tasked to outside managers. And the endowment has grown tremendously, appreciating over elevenfold since the early 1990s.

The endowment has not been immune to these financial challenges. The stock market’s springtime woes due to the pandemic-induced global recession diminished the endowment by 12 percent, according to vice president for business and finance Craig Johnson, who said the endowment is now worth about $10 billion.

In an attempt to offset budgetary struggles, University President Morton Schapiro announced in May that the endowment payout rate would be temporarily increased from the 5.2 percent rate seen last fiscal year to 6 percent — the highest rate this decade.

But for many students and faculty, that’s not enough. They’ve argued the University should be able to use the endowment to continue to pay all staff and subcontracted workers.

“With a $10.8 billion endowment, Northwestern can and should do better,” Students Organizing for Labor Rights tweeted in April. “There is no room for NU’s ‘financial worries’ when our workers’ lives are at risk.”

What is an endowment?

In May, Schapiro said there is “no way in hell” he would recommend the Board go over 6 percent. Anticipating dissatisfaction in his first financial update to the community on April 16, he wrote that most endowment funds are designated by donors for specific purposes, and that a portion of them were illiquid, making them difficult to access for short-term use.

Dan Bauman, a reporter for The Chronicle of Higher Education, said there are many misconceptions about what an endowment is and how it can be used. An endowment fund given to the University is not a “giant, unrestricted pile of money,” but rather a collection of funds given by donors, often with restrictions regarding how the money can be spent and whether or not the principal of the gift can be spent.

According to Northwestern’s Annual Report, of the $12 billion in net endowment assets in 2019, $7.47 billion, or about 1,000 funds, are not restricted by donors. Almost $4.13 billion of those unrestricted funds are designated for teaching, research and program support, student financial aid and capital and operations.

Graduate student Andrew Hull, a Northwestern University Graduate Workers co-chair who studies the endowment, said those funds are sufficiently large enough that Northwestern could, and should, be deploying more towards helping workers — particularly in light of recent changes in endowment law governing donor-restricted funds.

Historically, nonprofits’ endowments were governed by the Uniform Management of Institutional Funds Act, a law enacted in 47 states in the 1970s. Under that law, endowments were subject to the historic value requirement, which mandated that an endowed fund always had to maintain its initial value, referred to as the historic dollar value. Organizations could only spend a fund’s dividends; but when the equity funds holding these endowments declined during the Great Recession, such that many endowments depreciated below the original gift amount, organizations couldn’t legally access the money despite its usefulness in balancing budgetary shortfalls.

To fix the problem, the law was tweaked to create the Uniform Prudent Management of Institutional Funds Act, which replaces the quantitative historical dollar value standard with a qualitative prudence standard that requires managers to preserve the purchasing power of a fund’s principal according to a set of investing guidelines, rather than the specific amount. UPMIFA allowed for context to factor into investment decisions, with the idea being that the law would inject flexibility into endowment spending such that a manager could withdraw as much as an “ordinarily prudent person.”

In 2009, Illinois adopted UPMIFA with no payout rate spending restriction, a seven percent caveat that some states implemented. Now, when setting a payout rate, endowment managers should weigh factors such as the purposes of the institution and its endowment fund, the general economic conditions and the expected total return from investments. Under the factors designated in the prudence standard, Hull believes it’s appropriate for the University to spend more of the endowment.

“The University has the legal flexibility to say that in order to adequately protect and advance the purposes of our institution and of the endowment funds, we need to be willing to dip into the endowment more than we have,” Hull said. “We need to be willing to make use of, even after VP Johnson’s forecasted drop, our $10 billion endowment to protect the most important aspects of our institution. That includes, especially, our workers.”

Hull acknowledged that the endowment exists to protect the University in perpetuity, and he understands managers’ caution to push funds below their historical value — an investment strategy he would call prudent in normal times. But in a pandemic, Hull argues, the standards for prudence change. Endowments are not rainy day funds — but this is a hurricane, Hull said.

If the University doesn’t use its endowment to mitigate the pandemic’s financial effects, then Hull believes the mission of the endowment, to guarantee stability and resources for generations of academics, is undermined.

The University’s refusal to spend more on ensuring the demands of workers, including graduate student workers, are met, effectively tarnishes its reputation, Hull said, limiting its potential for growth.

If the University continues to balk at funding graduate student demands and furlough workers, Hull said, researchers and academics will take their talents to universities that better support them.

The role of liquidity

One potential reason Northwestern’s endowment fund managers may be wary of increasing the payout rate is the University’s interpretation of UPMIFA, as detailed in the annual report, appears to be similar to the historical dollar value standard removed in 2009. The University interprets UPMIFA as requiring the “fair value of the original donor-restricted endowment gift be preserved as of the gift date” even though UPMIFA allows any amount of spending considered prudent.

The annual report says the Board revised and ratified its spending guidelines in 2006, before UPFIMA was enacted, and that they make fair value assessments of funds as required by the Financial Accounting Standards Board’s Accounting Standards Codification, a private standard-setting body tasked by the federal government with setting accounting principles.

Another potential limit on increasing endowment spending is the way in which the funds are held. The University is not sitting on a pile of cash, but rather managing a range of investments in different asset classes subject to different redemption terms and market changes. The largest percentage of funds are held in private investments, absolute returns and real assets, which combine to constitute 60.4% of the endowment. Private investments and real asset holdings are relatively illiquid and ineligible for redemption, and absolute return investments range in liquidity.

Large universities typically hold endowments in long-term investments because they get a better rate of return, a sensible strategy considering they don’t need to spend them. Funds that are held in more liquid asset classes make up a smaller portion of the endowment — Northwestern’s holdings in US and international equity combine to constitute 28.9% of the endowment, and are redeemable daily to annually, depending on the equity, with notice periods ranging from one to 180 days.

If the Board wanted to liquidate more funds for spending, these are the asset classes they would likely draw from. Of course, those are the funds that have depreciated due to the stock market crash associated with the pandemic, although markets have more recently seen rapid improvement.

Hull said enough of the endowment’s funds are both unrestricted by donors and illiquid, and considering the relative small scale of the increased funding and pay NUGW is asking for as compared to capital projects, the University could still meet the union’s demands.

“Even if not all of it is especially liquid, that doesn’t take away from our demands,” Hull said. “That doesn’t make them infeasible.”

Weighing the short-term and the long-term

Many other universities are in the same quagmire as Northwestern. Princeton University has pledged to increase its payout rate, while Yale University’s president said its rate will be held steady, which still represents increased payout to the operating budget because the endowment’s value has decreased.

In an op-ed for Inside Higher Ed, Princeton graduate student Benjamin Bernard said wealthy universities have two options. They can allocate greater endowment funds now to meet the increased need for living stipends, insurance and salary; or they can keep those funds invested in the endowment to have an exponentially greater amount in the future to keep up with inflation and fund more research, projects and financial aid down the line.

While the latter scenario seems to make more sense on the surface, Bernard said it assumes the economy will continue to grow. He added that a failure to invest in the current generation of graduate students could undermine academia in the long-term, destabilizing lower-income students and shrinking the pool of students who can afford to continue pursuing scholarship.

“If (universities’) goal is to continue into the deep future, then spending more now could better prop up the university’s scholarship-driven mission than hoarding in strict deference to the dollar,” Bernard wrote. “The example of graduate funding illustrates how, in this wager against the future, austerity is partly a moral calculus. For funds can grow with compound interest, but so too can ideas.”

Universities are apprehensive to cash in some endowment funds because holding on to long-term investments maintains the potential for much greater future payouts, particularly in the current market, Bauman said. Additionally, uncertainty around the pandemic’s disruption of higher education augments trustees’ skittishness around spending their nest egg.

Ultimately, they have to decide between short-term and long-term priorities, even if the short-term ones have long-term implications, as Hull and Bernard argue.

“You’re caught between two very worthy causes you can support (with) a limited amount of resources,” Bauman said. “It’s a tough decision, because you want that money there to be able to provide as many people as possible a Northwestern education down the line, through scholarships or through other programs. The alternative is that you can’t spend as much as other people would like now.”