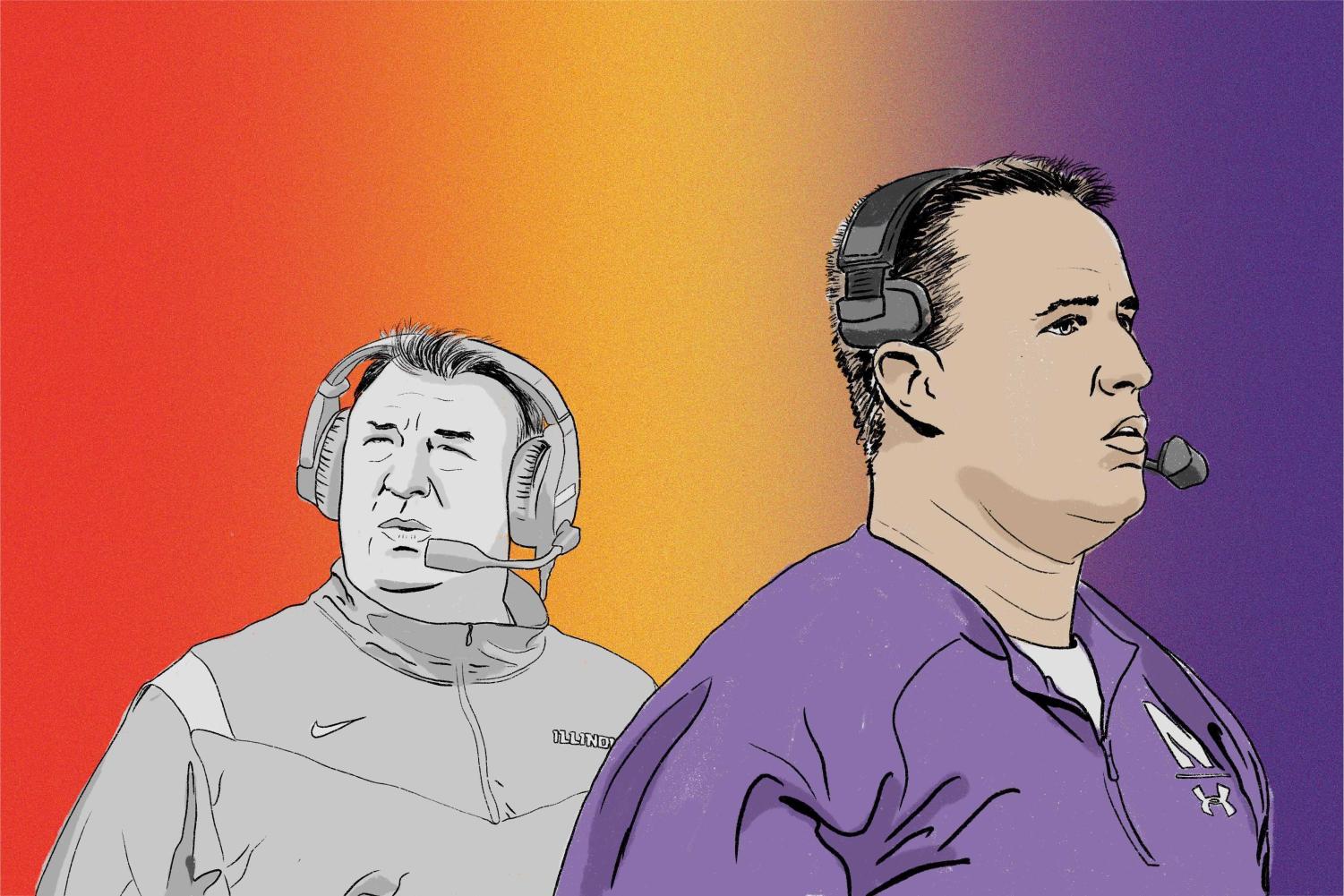 Pat Fitzgerald and Bret Bielema. The two coaches will face off Saturday when Northwestern takes on Illinois. (Graphic by Carly Schulman)

Pat Fitzgerald and Bret Bielema. The two coaches will face off Saturday when Northwestern takes on Illinois.

Football: ‘They both do things the right way’: Pat Fitzgerald and Bret Bielema’s friendship and coaching trajectories define Northwestern-Illinois rivalry

That news would force Illinois’ first-year head coach to miss his team’s upcoming game against then-No. 17 Iowa, a contest with massive implications for a Fighting Illini squad still in the hunt for a postseason berth. Multiple Big Ten coaches reached out to Bielema with well wishes the following morning. The first was Northwestern’s Pat Fitzgerald.

“Fitz and I have known each other for a long time,” Bielema said. “There’s a lot of mutual respect.”

Both Fitzgerald and Bielema played in the Big Ten and served as assistant coaches in the conference. Both eventually became head coaches during the 2006 season at NU and Wisconsin, respectively.

Bielema defeated Fitzgerald in two of their three head-to-head matchups on the sideline before he departed Madison for Arkansas. Bielema was fired in 2017 after five seasons with the Razorbacks and then embarked on a three-year coaching stint in the National Football League. Meanwhile Fitzgerald has brought the Wildcats to two of the last three Big Ten Championship Games.

“It’s great to have him back in the league,” Fitzgerald said. “This has always been a great rivalry built on respect, and I don’t see any change now with coach Bielema at the helm.”

The journeys of Illinois natives Fitzgerald and Bielema to leading the state’s two flagship institutions showcase their growth through various levels of college football.

Fitzgerald became an All-American linebacker at NU, while Bielema played on the defensive line under legendary coach Hayden Fry at Iowa.

From 1994-2001, Bielema coached at his alma mater as a graduate assistant, then linebackers coach. Fitzgerald led linebackers and defensive backs and handled recruiting efforts during his five years as an assistant coach with the Cats.

The two then rose to the top job, under vastly different circumstances. Bielema, the Badgers’ defensive coordinator, was chosen as the successor to Hall of Fame coach Barry Alvarez, while Fitzgerald was elevated to head coach following the sudden passing of Randy Walker.

“(I) knew (Fitzgerald) as a player,” Bielema said at Big Ten Media Days in July. “Knew him as an assistant coach. We grew up in the league recruiting at the same time. I knew early on, could obviously see what he was building.”

These experiences have led each coach to instill different lessons and values into their respective programs. Kurt Anderson is one of the few people who has had the opportunity to work under both of them.

Anderson, NU’s offensive line coach, served in the same role under Bielema with the Razorbacks for two seasons. In Fayetteville, Bielema prioritized diligence and the importance of meetings, along with preparation. On the Cats’ staff, Anderson has recognized Fitzgerald’s priority of developing a program culture.

The ways Fitzgerald and Bielema approach coaching and operations behind the scenes have led them both to success, Anderson added. He also found resemblances between the two, including emphasis on details such as running meetings and football fundamentals.

“They both do things the right way,” Anderson said. “They do things with integrity. Their philosophies of running the football and stopping the run are very similar. Recruiting good people from good families and getting to really know the people in recruiting is important to both of those guys.”

Both coaches have prioritized in-state recruiting and are finding success in Illinois on the recruiting trail for the 2022 class. Illinois has nine in-state recruits and despite the Cats having three, the group includes the state’s No. 6 recruit in wide receiver Reggie Fleurima.

This facet may be a key for both programs rebounding next season, and in the future.

No matter the result of Saturday’s contest, both teams will finish below-.500. For NU, a 3-9 or 4-8 record is a steep drop from last year’s one-loss regular season en route to the Big Ten Championship. A 4-8 or 5-7 for the Fighting Illini will represent progress under Bielema, whose team was projected to finish last in the Big Ten West in the 2021 cleveland.com Big Ten Preseason Poll — a spot the Cats currently hold.

Despite no bowl game berth on the line, the 2021 battle for the Land of Lincoln Trophy represents one of college football’s longest rivalries and more. A seventh consecutive win by the Cats will tie the longest victory streak in the rivalry and even the in-state schools at 55 head-to-head wins.

“Any year, you always want to beat your rival,” Fitzgerald said. “It doesn’t matter if you’re in grade school football or high school, college or pro. It’s always a bigger week. There’s always great friendships and respect on both sides of rivalries.”

That will certainly be the case this year.

The two have their differences: Fitzgerald is a White Sox fan. Bielema roots for the Cubs. When Anderson was with Arkansas, he said Bielema had notes handwritten, photocopied and distributed to the entire staff. With NU, everything is done on iPads and visual documents.

But their friendship persists. When Bielema left the Badgers for Arkansas, he made sure to call Fitzgerald, since they were together on a few committees. He did the same thing when he returned to the Big Ten, because Fitzgerald is the current president of the American Football Coaches Association.

And they see their friendship continuing for a long time, even though they will be on opposite sides of a divided state come Saturday.

“I knew when I took the job what that was going to mean between us and our relationship,” Bielema said. “I think both of us know how to be professionals, which is awesome.”