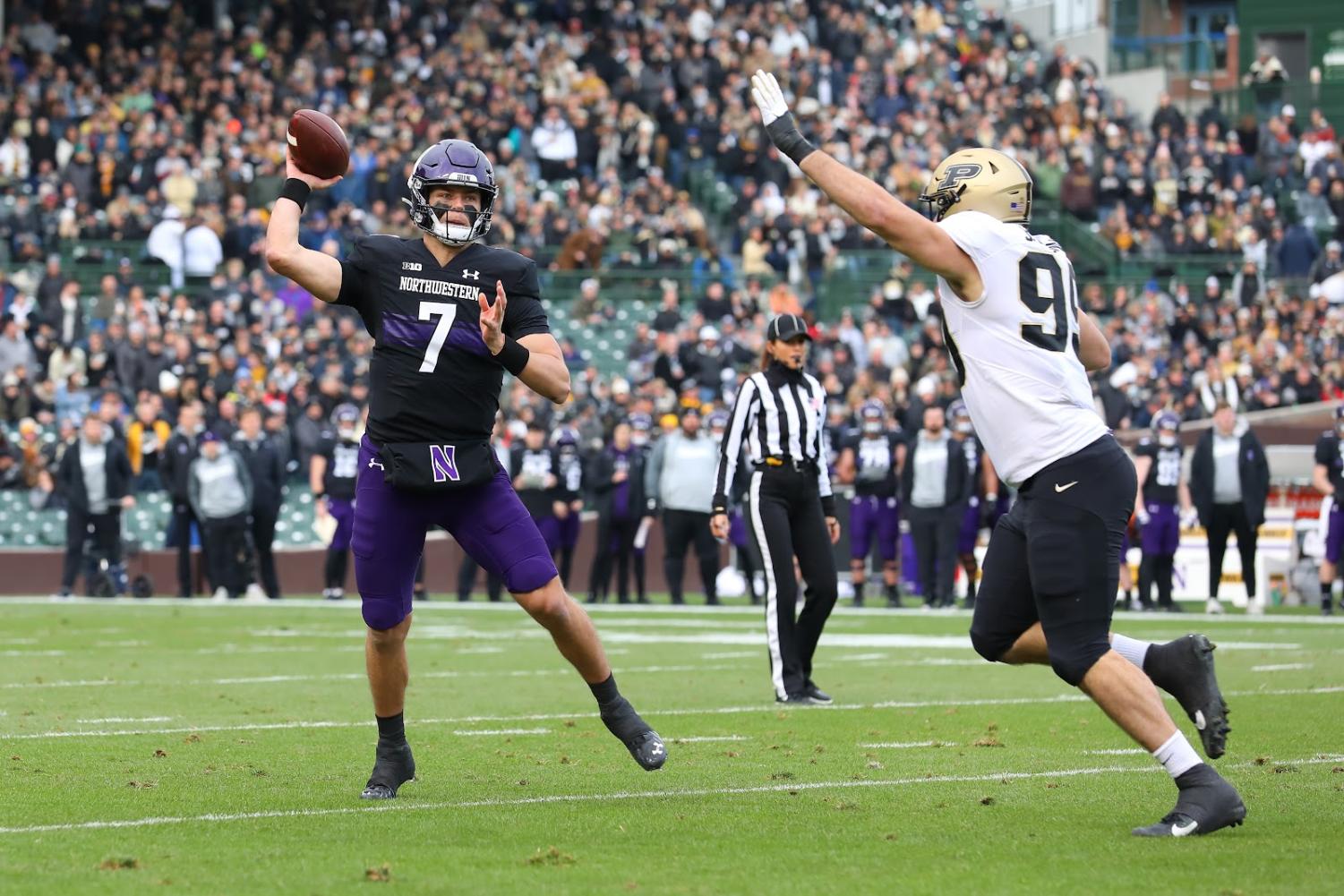 Senior Andrew Marty prepares to throw on the run. The senior quarterback started against Illinois in 2019 and is one of the Wildcats’ 26 seniors. (Joshua Hoffman/Daily Senior Staffer)

Senior Andrew Marty prepares to throw on the run. The senior quarterback started against Illinois in 2019 and is one of the Wildcats’ 26 seniors.

Moving on to the next game and performing well is crucial. But the Wildcats’ (3-8, 1-7 Big Ten) showdown this weekend isn’t a usual conference matchup. The team will travel to Champaign to face in-state rival Illinois (4-7, 3-5 Big Ten) and compete for the annual Land of Lincoln Trophy.

Neither team will likely make a bowl game, but the matchup is still important for both teams. The Cats have defeated the Fighting Illini six straight times and are now facing the opportunity to tie Illinois’ record of consecutive wins. To raise the stakes even more, Illinois leads the overall series by one win (55-54-5). But NU has a chance to tie that mark.

“Both teams would love to have this game,” coach Pat Fitzgerald said. “Obviously different records going into it, but nonetheless, you throw those out in any rivalry game. I think both teams will compete their tails off for the 60 minutes in Champaign.”

NU ranks last in the Big Ten West. Illinois isn’t far behind, sitting two spots above. Even though neither team is where it wants to be in the pecking order, a rivalry win will end the 2021 campaign on a high note.

With bragging rights and the hopes of securing the state supremacy title on the line, the battle between the Cats and the Fighting Illini is more than a Thanksgiving weekend contest.

Playing for the seniors

No senior entering Saturday’s game has ever lost to Illinois during their time in Evanston.

Fitzgerald said he’d like to send seniors out “the right way” by winning the rivalry game.

“We still got one more week to have their football career end on a good note,” sophomore safety Coco Azema said. “The season didn’t go our way, but we have the opportunity to send our seniors out with the Land of Lincoln Trophy.”

The Cats have 26 players stepping on the field for the last time in an NU uniform, including four of the Cats’ captains: graduate linebacker Chris Bergin, graduate defensive tackle Joe Spivak, senior quarterback Hunter Johnson and senior center Sam Gerak.

Preparing for his last game with this graduating group, Fitzgerald said his feelings are mixed. He’s excited for the showdown in Champaign, but feeling sentimental as the team’s last practice and matchup for the season take place on Thursday and Saturday, respectively.

“I’m very thankful for our seniors,” Fitzgerald said. “I’ve been around some of these guys for a number of years, going back to their high school recruiting.”

Preparing for next season

The Wildcats pulled off the upset. Their defense limited the Fighting Illini to 160 total yards and Azema, playing running back, carried the ball seven times for 123 yards and a touchdown, bringing the Cats to a 29-10 victory.

NU held onto its momentum during the offseason, continuing throughout the 2020 campaign. The Cats made the Big Ten Championship Game and finished the year with a 7-2 record. Looking back at the team’s success, graduate running back Andrew Clair said he wants to see the same trend next year.

“You have to take this game like it’s our bowl game,” Clair said. “Like coach said, a win at the end of the season helps you jumpstart the next season.”

Last year’s team was one of the most experienced groups Fitzgerald has coached, he said. This season, in comparison, is one of the youngest units he has led. Securing a victory to end the season can boost morale amid a sub-.500 record.

“We’ve got a plate cleaner,” Fitzgerald said. “It’s always great to have that final taste in your mouth.”