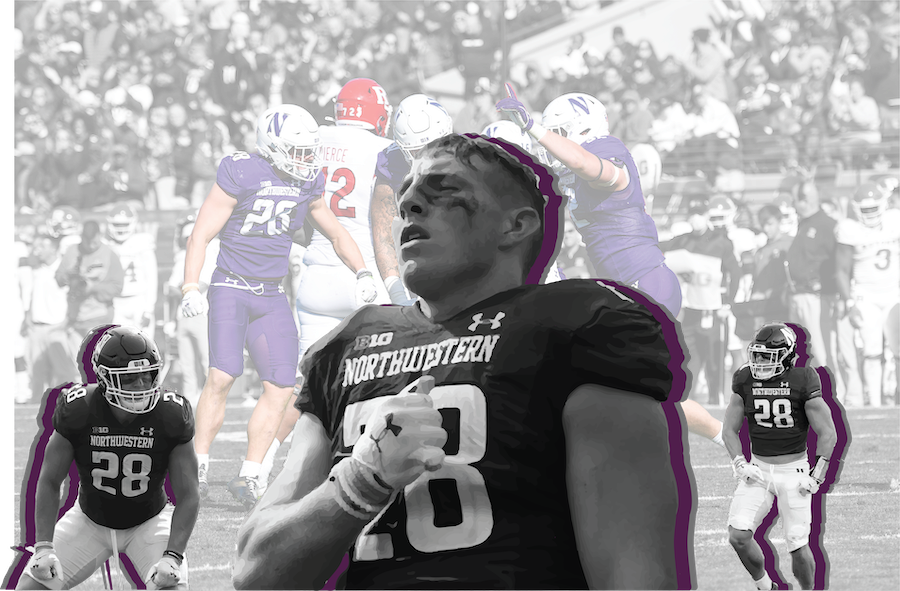 Football: From walk-on to one of the top linebackers in the country: Northwestern’s Chris Bergin is the embodiment of hard work

Nobody expects preferred walk-ons like linebacker Chris Bergin to become stars on the field, let alone receive playing time and work their way into the rotation.

On top of his “bottom, of the bottom of the totem pole” status, he stood at 5-foot-11-inches — a measurement people viewed as undersized for the linebacker position — and held no Power Five offers coming out of high school.

Bergin endured being overlooked and doubted, while building up his desire to make it to the top. He lives by a quote instilled in him at an early age: “Work hard, keep your mouth shut and good things will happen.” Bergin showcased his drive for success on the field to prove the naysayers wrong every chance he could.

“I knew that I needed to have a little something extra,” Bergin said. “I needed something more to be the player I wanted to be, the player I knew I could be, and I feel like having those experiences just sharpened the chip on my shoulder.”

That drive has turned the graduate into one of the best linebackers in the country. Before the season, Bergin earned a spot on the Butkus Award Watchlist, given to the top linebacker in the country. Now halfway through the 2021 campaign, he has the most total tackles in the Big Ten with 63.

Even after receiving national recognition, Bergin competes like the chip on his shoulder is still there. It has turned him into one of the most revered players at Northwestern.

“He is absolutely one of the most relentless guys I have been around,” coach Pat Fitzgerald said. “He has performed so well throughout his entire career not only at linebacker, but also on special teams that I think gives guys great confidence in him as a teammate, and then they trust in what he says because he is going out and he has earned it.”

Bergin’s football journey started the day he was born.

His father, Joe Bergin Sr., played college football at Michigan State, including as a starting defensive lineman during the Spartans’ run to the 1987 Big Ten Championship and the 1988 Rose Bowl.

This experience allowed Bergin to grow up around the game and eventually develop a passion for and devotion to football. He played other sports, including track and field, but nothing could top his first love. He wasn’t the only one in the family to feel the same way, as both his older brother Joe and younger brother Owen joined him to throw the football around.

“I can’t really think of a time where we didn’t love football,” said Joe Bergin, who played defensive back at NU from 2015 to 2019. “You see old helmets in the basement, see some photos, and that’s enough to kind of start the obsession at a young age.”

According to Joe, their dad never pushed for the trio to play football. Knowing he played the game, though, made the boys want to be just like him. Competing with one another helped  cultivate their craft and made them stronger as players, Owen said.

It also taught the brothers to work the hardest to beat the guy across from him. This held true for Bergin in Evanston. He was named Special Teams or Defensive Practice Player of the Week five times for the Wildcats during his freshman year.

Despite a two-year difference between Joe and Chris and a three-year divide with Owen, it didn’t stop any of them from keeping an eye on the prize of playing football for the Cats — and living out Bergin’s treasured motto of earning respect.

“We’re the biggest sore losers if you ever did anything in the backyard and that carries over here,” Owen said. “He never settles for second place in what he does and he always just has to be the hardest working person whenever and whatever he’s doing.”

Coaching at Country Day for 37 years, MacLean led every team a Bergin brother played for. Working side by side with them, he wasn’t surprised to see the brothers attend NU. He also wasn’t shocked to see Bergin become a leader for the Cats.

“He was going to put every ounce of himself into the game,” MacLean said. “He’s got good speed, but I think more than anything it exemplifies the effort that he plays with, he never considers a play is over.”

Bergin’s personal mission to prove the doubters wrong launched during his sophomore season of high school. Striving to make the varsity team, he fell short of his goal, earning a spot on junior varsity instead. MacLean said Joe Sr. told him that Bergin didn’t want to buy his school books out of disappointment.

Bergin made it his mission to make his stint on JV a short one. So during the first game of the season, he led the Yellowjackets to an upset victory.

The following week, he was moved up to the varsity squad and earned a starting role.

“You present him with a challenge and he’s going to take it personally,” MacLean said. “He just attacked the game, and it was infectious for our other players, and he’s been a part of some really outstanding defenses here for us.”

In addition to serving as a key asset on defense in high school, Bergin played running back and was a return specialist alongside his best position: strong safety. Making an impact on all aspects of the game, Bergin was an essential piece to Country Day’s success.

“I think that’s my edge,” Bergin said. “I’m at a point in my life where, even though I no longer think that I’m proving everybody wrong, I feel like I get to prove some people right — like my coaches who have put so much trust in me. That chip is just forever there.”

On special teams and defense for NU, Bergin’s skill and stats consistently improved year after year. The hard work paid off. He started four games as a sophomore and became a starter his junior year.

Bergin set the tone to start his third year for the Cats, racking up consecutive games with 10 tackles. This was only the tip of the iceberg, as he finished with the third most tackles (86) on the team by the end of the season.

In addition to learning under Fitzgerald —  a College Football Hall of Fame honoree — Bergin was taken under the wing of linebackers coach Tim McGarigle, who made a Football Bowl Subdivision-record 545 tackles. He praised his teammates for helping him grow throughout his time at NU.

“It’s hard not to develop the right way in this program,” Bergin said. “It gave me a real humbling experience to take a step back and just kind of witness and watch the older guys who have been successful, and I learned so much.”

Two of those players were Bergin’s business partners at the Irish Law Firm — linebackers and 2020 graduates Blake Gallagher and Paddy Fisher. The three Cats, all of whom were of Irish descent, wreaked havoc on opposing offenses each weekend and finished as the top three tacklers for NU in 2019 and 2020. The group’s pinnacle came last season, when the Cats became the only Power Five program with three active linebackers with 200 or more career tackles.

Fisher and Gallagher reached the starting lineup in 2017 and 2018, respectively, with Bergin joining the starting lineup games after Gallagher. He took his time as a reserve to study his teammates’ games, like he did with previous linebackers Brett Walsh and Nate Hall. And when his number was called, he made sure to solidify himself in the lineup.

As the lone partner entering the 2021 season, Bergin, one of the Cats’ five team captains, feels like he has become more vocal as a leader. He continues to lead by example.

“The first part about being a captain is putting your play on the field and that’s what he has done since he came on the field in 2018,” McGarigle said. “He leads, he makes all the checks, he plays harder than anyone in the country, and it shows for him.”

With six games left in the Cats’ regular season and the team’s best opponent ahead in No. 6 Michigan, Bergin holds an unwavering mentality of going 1-0 each week.

“This game is as important as anyone else and we take every opponent the same,” he said.

Coming off its first conference victory against Rutgers, NU produced on both sides of the ball, especially on defense, limiting the Scarlet Knights to seven total points.

Although the contest against the Wolverines marks a return to his home state and a clash against the rival of his father’s alma mater, Bergin views it as a chance for the Cats to determine their destiny.

With potentially six games left in his career donning the purple-and-white, Bergin has already made his presence known by leading the team in tackles and notching a career-high 14 against Ohio. He is spending his remaining time with NU living by the proverb, “Don’t cry because it’s over. Smile because it happened.”

“It’s something I really try not to think about,” Bergin said. “This is obviously very emotional for me because this place is home and I bleed purple through and through.”

— Football: From walk-on to one of the top linebackers in the country: Northwestern’s Chris Bergin is the embodiment of hard work

— Football: Northwestern looks to build off last week’s defensive success ahead of massive test against No. 6 Michigan