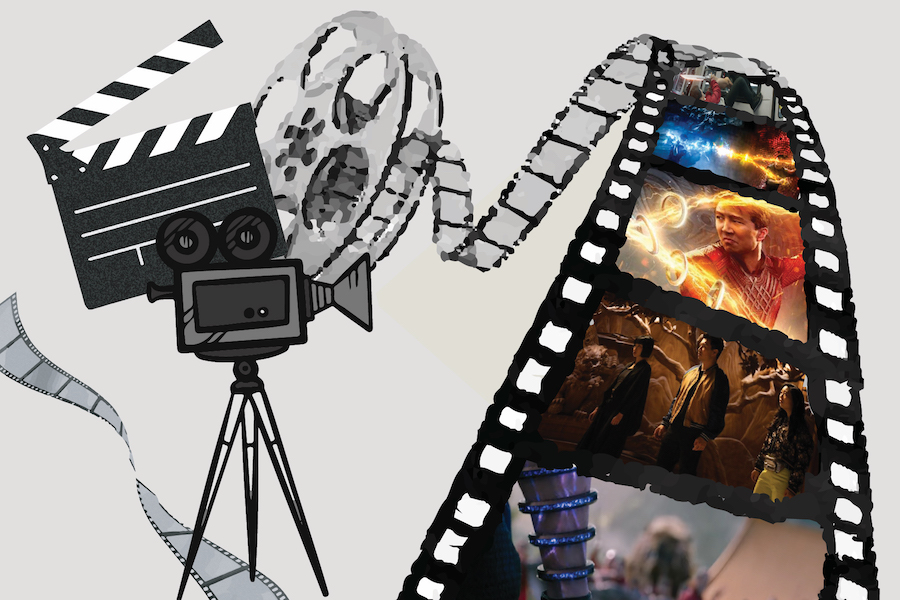 Stills from “Shang-Chi and the Legend of the Ten Rings.” The 25th film in the Marvel Cinematic Universe introduces a new superhero to the ranks of the Avengers. (Graphic by Angeli Mittal)

Stills from “Shang-Chi and the Legend of the Ten Rings.” The 25th film in the Marvel Cinematic Universe introduces a new superhero to the ranks of the Avengers.

The prospect of reviewing a movie seems impossibly hard in its opening minutes — how will I manage to find enough to dissect and explore?

With an entertaining film like “Shang-Chi and the Legend of the Ten Rings,” there’s a shift around the ten minute mark in which the task goes from daunting to reassuring.

A truly great film then has a second, more shocking shift after the first act, transitioning from the ease of a glowing review to another, arguably more difficult task — finding the words to possibly describe its brilliance and do the subject justice.

And “Shang-Chi” fits into this second category too.

Despite the compounding obstacles that might obscure it from prominence within the 25-film Marvel catalogue — superhero fatigue, the title character’s relative anonymity and its rejection of the dependable superhero movie formula — “Shang-Chi” is a winner in every sense. The film is filled with storytelling so fresh and satisfying that it transcends the Marvel label, yet also features the best of what the franchise has to offer.

“Shang-Chi” opens with an epic legend that spans a millennium: the rise of the Ten Rings organization. It then proceeds to reveal the humble existence of its supposed hero, Shang-Chi (Simu Liu), who works as a valet in San Francisco. But Shang-Chi’s heritage as the son of Ten Rings leader Xu Wenwu (Tony Leung Chiu-wai) yanks him out of his comfortable anonymity and forces him to face his past and become the hero he was destined to be.

At times, “Shang-Chi” feels like a Marvel Cinematic Universe movie in name only, and that’s a good thing.

“Shang-Chi” works just as well without any prior Marvel knowledge — the number of returning MCU side characters can be counted on one hand — and director Destin Daniel Cretton lays out the story’s dense, rich exposition without losing the stakes or tension.

Some other classic MCU components, the tongue-in-cheek humor and modern references, are thankfully limited to an occasional change-of-pace role to offset the intensity. In fact, it’s a well-written and scene-stealing character, Awkwafina’s Katy, that adds the most refreshing humor, and she even has a nuanced emotional arc that entirely sidesteps the cliché of romantic interest.

Despite Awkwafina’s attention-grabbing performance, the actress, and by extension the film, has come under fire because of her use of a Blaccent in performances before her Marvel debut. The actress attempted to address the issue in a recent interview, saying she is open to further discussion on the subject.

In other areas, Marvel builds on its mastery in the action genre. The martial arts-inspired fighting styles make for both heart-pounding battles and insight into each character, along with the stunning visual appeal. The set pieces also clear the high Marvel bar, incorporating both natural beauty and seamless CGI.

The 2018 release “Black Panther” makes for an obvious comparison to “Shang-Chi” and is an apt parallel in how to embrace creativity within the MCU.

Both films overcame the hurdle of a superhero with less time on the big screen than his Marvel peers, all while paving new ground in terms of representation and cultural richness. Each narrative also creates suspense by plunging viewers into uncharted territory, telling stories in such unique ways that it’s impossible to know what comes next. Memorable acting performances, fantastic action sequences and SPAC-worthy soundtracks ensure each lives up to the Marvel name, and how could you not root for superheroes played by Liu and the late Chadwick Boseman?

Thematic approach is a key element where these two blockbusters diverge — “Black Panther” explores the ideological differences between its hero and its villain, while “Shang-Chi” instead wrestles with the concept of family. Shang-Chi’s family dynamic drives this story, as the film dives into both the divides and the bonds between its members in constructing its central conflicts.

Shang-Chi will inevitably be roped into Marvel crossover films and galactic battles in Marvel’s post-Infinity Stones era, because that’s how the MCU works. Though this new style of superhero action has me clamoring for more Shang-Chi (and Katy) screen time, this origin movie-turned-masterpiece feels like lightning in a bottle.

Movies about the Avengers may be what makes Marvel the most money, but “Shang-Chi” is what Marvel does best — a combination of quality and ingenuity that makes for a rollicking good time.