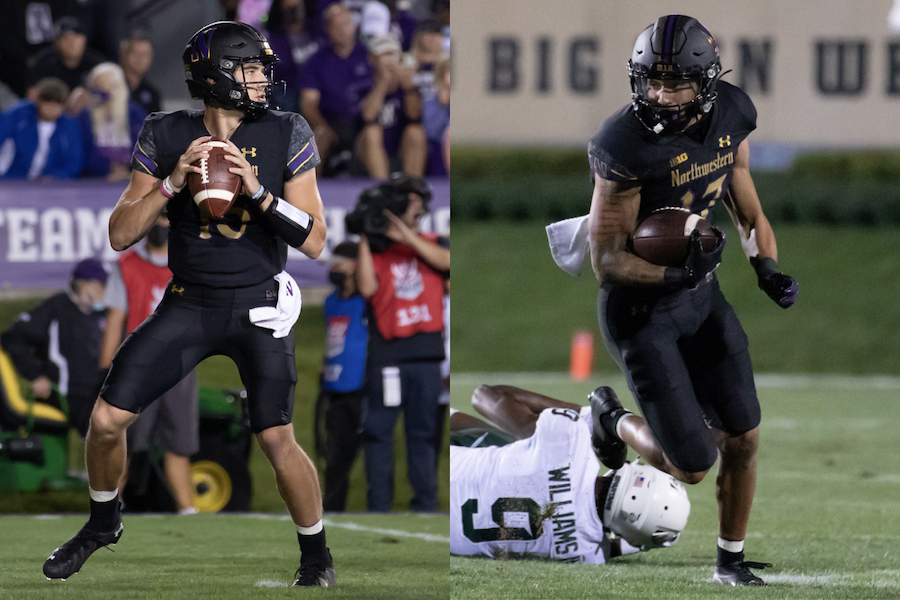 Left: Hunter Johnson stands in the pocket. Right: Bryce Kirtz evades a defender. The duo are Northwestern teammates after playing together at Brownsburg High School in Indiana.

Football: From Brownsburg to the Big Ten: Inside the high school connection between Northwestern’s Hunter Johnson and Bryce Kirtz

In the summer of 2016, John Hart struck up a conversation with Hunter Johnson at the Best of the Midwest Football Combine in Indianapolis.

The two would soon be partners on Friday nights. Hart was heading into his first year as the head coach at Brownsburg High School, while Johnson — a five-star recruit committed to Clemson — prepared for his final season as quarterback of the Bulldogs.

Johnson didn’t work out that day. Instead, he spectated high school players alongside his new coach. He made sure to point out wide receiver Bryce Kirtz, who he called “really, really special,” according to Hart.

“Bryce lined up and he kept waiting in line at this camp to go against the Division I kids,” Hart said. “He looks over at me, waves, winks at me and then runs right by this Division I (defensive back).”

Johnson’s arm talent and Kirtz’s speed proved to be a potent combination for opposing secondaries during the 2016 season. They connected on 52 passes for 831 yards and 11 touchdowns before Johnson headed to South Carolina and Kirtz grew into a three-star recruit and one of the best high school players in Indiana.

Now, they’re reunited once again on the gridiron, this time chasing Big Ten titles at Northwestern.

In a season-opening loss to Michigan State, Johnson threw for a career-high 283 yards and three touchdowns. Meanwhile, Kirtz reeled in a team-high seven catches for 80 yards.

Their longtime chemistry could be a missing piece to the emergence of the Wildcats’ passing attack.

“I was watching Hunter and every time the pocket collapsed, he’s looking Bryce’s way,” said Tyler Kirtz, Bryce’s brother and a Brownsburg teammate of Johnson’s. “They naturally already have that connection, like that’s the first receiver he’s going to look to when he’s under pressure. I could just tell watching the game.”

“This is the little Kirtz”

Bryce racked up 1,137 yards and 18 touchdowns as a quarterback, running back and wide receiver for Brownsburg’s freshman team. He was later elevated to varsity for the 2015 Indiana High School Athletic Association playoffs.

He saw playing time at the end of a 61-14 loss to Avon High School alongside Tyler, who caught 1,051 yards and 15 touchdowns as a senior in 2015. Tyler was friends with Johnson back then — a connection that helped build rapport between his brother and Brownsburg’s star quarterback.

“Once Hunter knew, ‘Okay, this is the little Kirtz,’ I think Bryce became Hunter’s more targetable receiver,” Tyler, who played wide receiver at Ball State from 2016-19, said. “(Johnson) knew that (Bryce) was an athlete. Being my younger brother, I think naturally (Johnson’s) going to look his way more and that helped build the relationship.”

Early on, the bond between Johnson and Bryce was more than just the gridiron.

Tyler, Hari Sathyamurthy — a former runner at Stanford — and the duo made up the Bulldogs’ 4×400 relay team that finished 10th at the 2016 State meet. To make the race, Johnson departed the Elite 11 Finals, a showcase for high school quarterbacks, for Indiana before flying back to California to finish the competition.

But the field was still on their mind. Then-Brownsburg boys track and field coach Julie Waggoner — who said Bryce was good enough to run in college — remembers the two throwing before heading to track training.

Once football practice started, Johnson and Bryce stayed late every day to work on routes. Johnson was always willing to work with his teammates, Brownsburg offensive coordinator JT Whitaker said. Yet the coach felt that the signal-caller made extra effort to help his wideout get ready for gameday.

“It was like, ‘Hey man, We got to get this guy up to speed as quick as we can because he’s gonna help us win games,’” Whitaker said. “With Bryce, there was not really an option after practice. It was, ‘Hey, we’re going to throw routes.’ With the other guys, he would say, ‘Hey, we’re gonna throw routes if you want to join.’”

Their hard work came to fruition during the first game of the season.

A run-pass option fell apart against Bloomington South High School, forcing Johnson to scramble out of the pocket. He hurled the ball off his back foot, and there to catch it 65 yards downfield was Kirtz, who found the end zone 20 yards later. Kirtz finished the game with four receptions for 117 yards, while Johnson threw for 242 yards in a 28-26 win.

Kirtz registered a touchdown in eight of his 10 games, including a 175-yard, three score performance in a victory over Franklin Community High School. Despite being one of the youngest players in the wideout room, fellow receivers understood Kirtz’s talent, highlighted by his deep fade, post and comeback routes.

Kirtz’s speed contributed to his rise into the Bulldogs’ leading receiver, while chemistry with Johnson provided an offensive boost that helped Brownsburg make a run to the sectional semi-finals.

“Hunter helped me adjust,” Bryce said. “He made me feel way more comfortable out there, just telling me, ‘You got it.’ The best memory I have with Hunter is him teaching me how to play football out there at the higher level, and then now here in college.”

Once Johnson left for Clemson, Bryce was not just catching long passes down the field. He played running back, ran jet sweeps and even took snaps at quarterback.

“You can’t replace somebody like Hunter at the high school level,” Tyler said. “Seeing Bryce grow in the aspects where he had to be more flexible on the team… he grew into a complete player once Hunter left because he had no other option for the team to be successful.”

During his final two seasons at Brownsburg, Bryce caught 113 passes, threw three and ran for 506 yards with a combined 31 touchdowns. His performance garnered him 17 offers from programs like NU, Notre Dame, Iowa, Indiana and Michigan State.

Meanwhile, Johnson spent the 2017 season with the Tigers, but soon entered the transfer portal. He announced his transfer to NU on June 11, 2018. Eight days earlier, Bryce announced his intent to join coach Pat Fitzgerald’s program as the 2019 class’ second-highest ranked recruit.

Bryce’s commitment was “100%” based on his feeling during a visit to Evanston, Whitaker said. When Bryce discovered that his high school teammate was joining him, Tyler said his brother became excited and more confident in his decision to join NU.

But it took more than three years for them to play in the same lineup. After a 2019 season marked by inconsistency and injuries, Johnson lost the top job to Peyton Ramsey and served as the Cats’ backup quarterback in 2020. Meanwhile, Kirtz redshirted his 2019 season before catching just six passes for 67 yards last year.

“Nowadays, if a kid doesn’t get exactly what they say, they want to transfer right away. He was just the opposite,” Hart, the Brownsburg head coach, said of Bryce. “He was being accountable about why he wasn’t playing and then once he got these intricacies of the game, it was going to change him as a player.”

During the offseason, Kirtz gained 10 pounds in the weight room and dove into the playbook. Meanwhile, Johnson improved his decision-making and grew more confident at the line of scrimmage — assets that won him back NU’s quarterback job.

Joining Kansas graduate transfer Stephon Robinson Jr. in a wide receiver room without its top three options from last season, Kirtz has solidified himself as a top target for Johnson. And Cats fans are excited.

Fitzgerald noticed the chemistry between the former Bulldogs and said their first game against Michigan State “was just a small indication of where we’re going to be able to go offensively.”

Following their Friday game against Franklin Central, Brownsburg’s coaching staff tuned into the second half to watch Johnson and Kirtz. Tyler was “screaming” when his brother reeled in a 41-yard catch down the left sideline, and thinks Bryce will be a All-Big Ten selection.

The Central Indiana natives are back together once again.

“It’s not very often that you get to play with a high school teammate in college ball,” Johnson said. “Having that chemistry’s been great. He’s one of my guys.”

— Football: Twenty years ago, Northwestern saw its world upended by the 9/11 attack

— Football: Northwestern looks to play to its standards against Indiana State