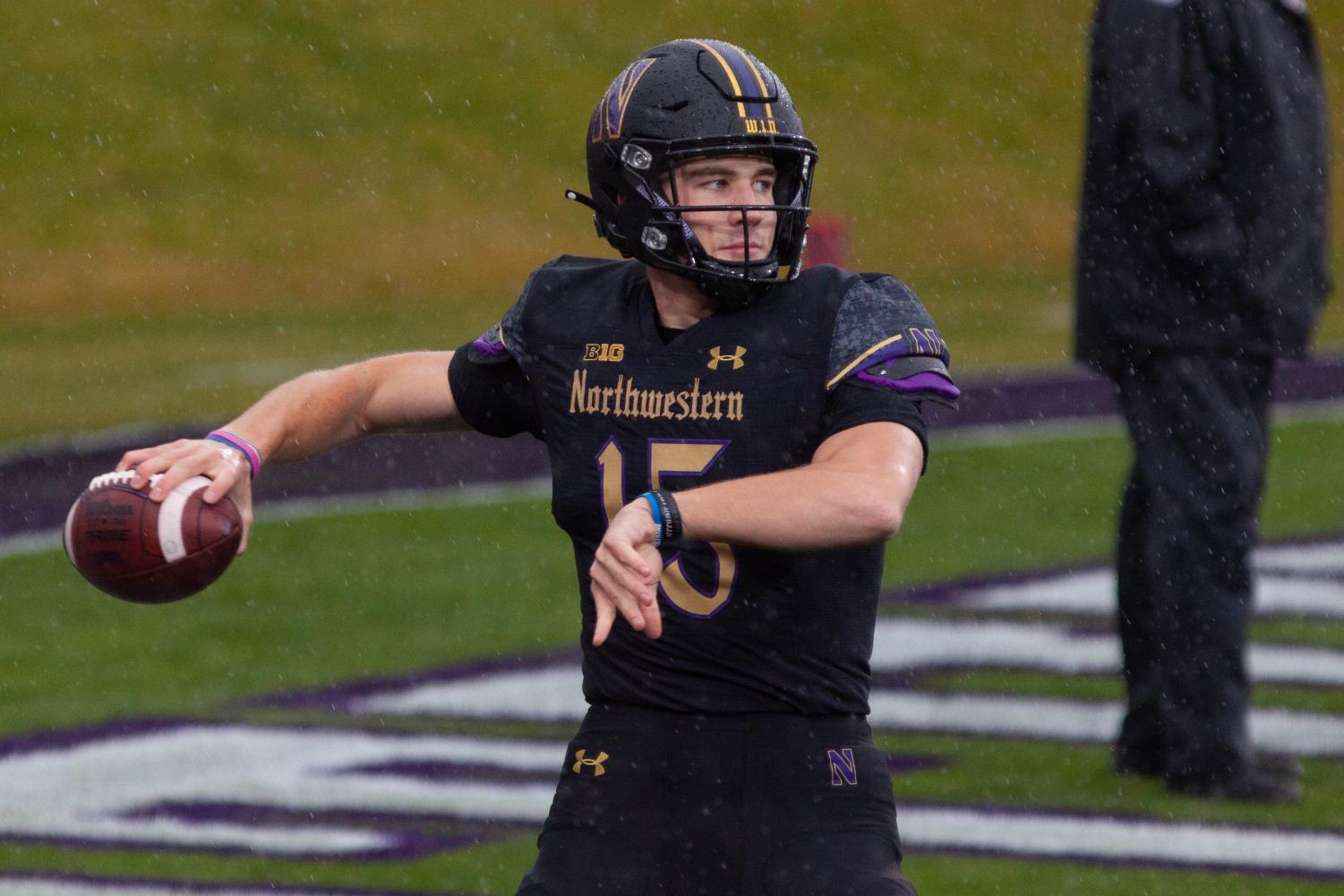 Hunter Johnson prepares to throw a pass. For the first time in nearly two years, Johnson will be Northwestern’s starting quarterback when he takes the field against Michigan State. (Daily file photo by Joshua Hoffman)

Hunter Johnson prepares to throw a pass. For the first time in nearly two years, Johnson will be Northwestern’s starting quarterback when he takes the field against Michigan State.

After Northwestern’s 2019 season, Mike Bajakian got to work.

Bajakian, who was named the Wildcats’ new offensive coordinator in December, proceeded to watch every play of NU’s 3-9 campaign. Featuring prominently in the footage was Hunter Johnson.

On film, the former five-star recruit’s struggles were well documented. They ranged from committing three turnovers — including a game-clinching fumble — in the season opener at Stanford to being benched in a three-touchdown loss to Michigan State after throwing for just 88 yards.

Johnson also suffered a knee injury against Wisconsin, which was re-aggravated in a game versus Indiana. A sack by Minnesota safety Antoine Winfield Jr. left him sidelined for the remainder of the season.

But things have changed since 2019, when the Clemson transfer threw for 432 yards, one touchdown and four interceptions with a 46.3 completion percentage.

Bajakian noticed Johnson’s improvement this year, from the start of spring camp to the summer. He threw with consistency and competency. He made better on-field decisions. He forced fewer throws into coverage. He found a rhythm with NU’s receivers and tight ends during offseason practice.

After talking with coach Pat Fitzgerald, Bajakian knew it was time. He called the senior into a meeting and told him what Fitzgerald would soon relay to the entire team. On Aug. 17, the news was officially announced: Johnson will lead the Cats’ offense onto the field against Michigan State in September.

“I’ve worked hard with these guys over the couple years and developed that chemistry,” Johnson said. “I’m just excited to go out and go cut it loose.”

Johnson doesn’t view his sophomore season with regret. Instead, he sees it as a learning experience.

It taught him the mental fortitude that comes with being a quarterback and the importance of completing the tasks of a starting signal-caller in the Big Ten.

“Any kind of struggle you go through is never easy,” Johnson said. “Keeping that perspective, knowing that I’ve gone through that and knowing that at some point, something’s gonna go wrong. And I’ll be ready.”

After NU finished the 2019 season with college football’s fifth-worst passing offense, Fitzgerald parted ways with longtime offensive coordinator Mick McCall — whose system Johnson struggled to grasp. Fitzgerald then brought in Bajakian, who served in the same role at Boston College.

Bajakian trained closely with Johnson in the spring of 2020, encouraging the signal-caller to exude confidence at the line of scrimmage and trust his decisions.

In March 2020, the Cats added a new quarterback in Indiana transfer Peyton Ramsey. An All-Big Ten Honorable Mention in 2019, Ramsey won the starting job and led the Cats to a Big Ten West Championship and Citrus Bowl title last season.

“Peyton came in and did such a good job,” Fitzgerald said. “That was a credit to Peyton and I thought Hunter, (senior quarterback) Andrew (Marty), the whole group were good teammates. That’s what I’m really proud of.”

Even though Johnson only saw the field in two games and threw no passes, he soaked up the experience of playing behind Ramsey. The Brownsburg, Indiana native learned to stay composed in the moment and be “level-headed” while performing on the field.

These lessons have proved to be a crucial factor in the offseason competition between Johnson, Marty and South Carolina transfer Ryan Hilinski, who threw for 2,357 yards and 11 touchdowns with the Gamecocks in 2019.

In the midst of the quarterback competition, Johnson said his ability to throw an accurate ball and make plays on the ground differentiated him from Hilinski and Marty.

“He’s real calm and even-keeled, which is something that you need as a quarterback,” Robinson Jr. told The Daily. “Going out there and having the confidence in him to make plays. He trusts us as well, so that’s a good thing.”

Fitzgerald and Bajakian set expectations early on for the Cats’ starting quarterback.

Now entering his 16th year leading NU, Fitzgerald emphasized qualities such as taking care of the football and making the 10 offensive players around them better. Bajakian looked for someone who exemplified leadership and could build relationships on and off the field.

Fitzgerald also prioritized ball security, something Johnson struggled with in 2019. Bajakian has noticed Johnson’s improvement in taking care of the football this offseason, citing the senior’s ability to move through progressions during a play and accurately complete checkdown throws.

Johnson’s performance led him to be named the starter 17 days before facing the Spartans. When Johnson was announced as the starter over then-senior TJ Green in 2019, it occurred mere minutes before kickoff against the Cardinal.

“He’d already demonstrated he was ready for that,” Bajakian said. “It’s a consistent level of performance at a high level. That’s where the decisions are based.”

It is up to the coaching staff to put Johnson and the rest of the Cats’ offense in the best position to succeed, Fitzgerald said. He added that Johnson has grown in light of the adversity he faced and that confidence will be crucial to his success.

“When he’s confident and he lets his talent go out there,” Fitzgerald said, “it’s as good as we’ve had.”

Every day, Johnson practiced and prepared for the moment when his number would be called. Now that it has come, his main goal is leading the Cats to a win over Michigan State — something he hopes can spark a successful season.

When Johnson committed to NU in June 2018, he was viewed as the successor to Clayton Thorson — the winningest quarterback in program history who led the Cats to their first Big Ten Championship Game in 2018 — and potentially more. But it hasn’t been an easy road back to the starting role.

“It’s been a journey,” Johnson said. “I’ve been working towards this. Just excited to have the opportunity and go out there and play with my guys again.”

Now, Johnson will soon be back to where he was in August 2019 on a sunny afternoon in Palo Alto, California: a starter under center with the Wildcats’ hopes and prayers resting on his shoulders.