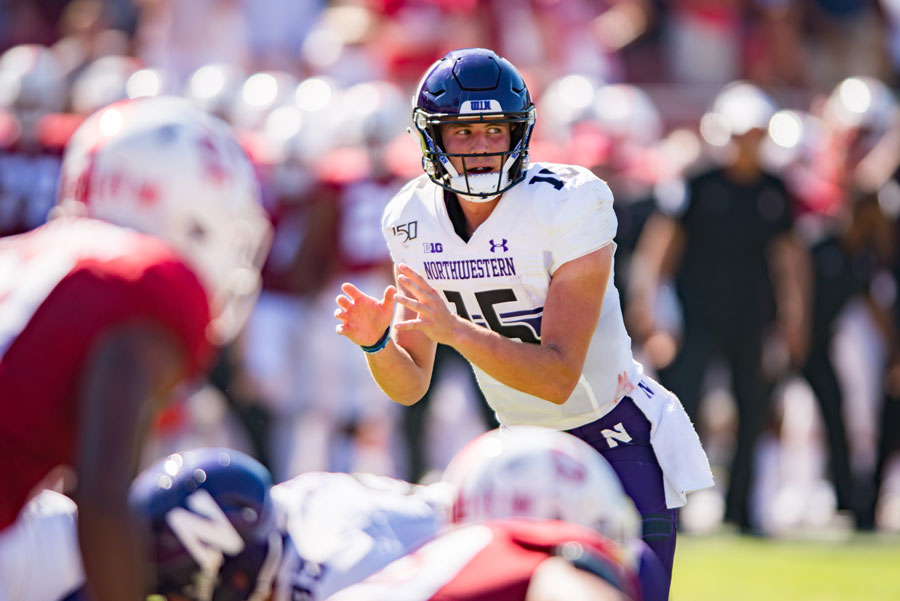 Hunter Johnson prepares to take a snap. The sophomore quarterback has struggled so far this season. (Daily file photo by Noah Frick-Alofs)

Hunter Johnson prepares to take a snap. The sophomore quarterback has struggled so far this season.

Sometimes, he looks at his situation and asks himself “why me?”

Three years ago, Lowell Narcisse was a top quarterback recruit in the 2017 class, expecting to set the college football world on fire. He’s already transferred twice –– going from LSU to Mississippi Gulf Coast Community College to the University of Texas at San Antonio. He says it’s been a difficult journey.

“You know the work that you put in,” Narcisse said. “You know the things that you do to prepare yourself for those moments. And then a lot of things you can’t control happen, that’s frustrating.”

The biggest lesson he’s learned along the way? It’s not easy being a quarterback who expects a lot from himself and doesn’t deliver immediately.

There are plenty of four and five-star quarterbacks in that class who thought they would hit the ground running. Alabama’s Tua Tagovailoa and Georgia’s Jake Fromm are Heisman contenders. Kellen Mond and Sam Ehlinger have received all-conference recognition at Texas A&M and Texas.

But of all the quarterbacks in that highly-touted class, none were supposed to be as good as Hunter Johnson, the top recruit at his position that year. He’s struggled more than all of them, starting only four games and throwing three touchdowns at two colleges in three years.

After a hit against Wisconsin caused Johnson to miss Northwestern’s game against Nebraska, he’s uncertain if he’ll start Friday against Ohio State. Despite rehabbing throughout the last two weeks, now he’s trying to beat out Aidan Smith, who was the Wildcats’ third string at the beginning of the season.

“This is not the way we planned it,” Johnson said after another practice where he tried to put the pieces together.

It’s hard preparing to face an Ohio State defense that’s considered to be one of the best in the country. It’s even harder when you’re trying to get back to full strength.

After missing the Wildcats’ last game, he spent the bye week studying film and going through rehab, icing his shoulder and his knees and his ankles. There’s been a lot of ice.

NU hasn’t won a Big Ten game yet, can’t score and is about to face an elite defense. But Johnson has his own issues.

“(He’s) got to go out and produce on gameday,” coach Pat Fitzgerald said. “When you’re not, sometimes taking a step out is what you need to do.”

This isn’t how Johnson’s redshirt sophomore season was supposed to go. Johnson was supposed to fill Clayton Thorson’s shoes. Supposed to be even better. You couldn’t have a conversation about NU football without hearing about “five-star Clemson transfer Hunter Johnson.”

So as he struggles to be that guy, Johnson admits he’s feeling frustrated. He’s never lost this much, and he’s never played like this under center.

Sometimes, Johnson will call people he trusts to vent. He asks them what he’s supposed to do.

“You have to make sure that you have some people to talk to about things and let it go,” he said. “I’ve had many conversations over the week with people I love and trust, trying to work through it. You’ve got to talk to people about it.”

Johnson wouldn’t be facing this much pressure if he hadn’t been such a phenomenon coming in. In high school, the others quarterbacks looked up to him. He was clearly the top passer in his class, the one who would have been voted most likely to succeed.

Four-star recruit Myles Brennan, now a three-year backup at LSU, remembers meeting Johnson at a quarterback camp in high school. Brennan marveled at him flinging the ball around the field like he was a top draft pick at the NFL Combine. “He was the number one quarterback,” Brennan said.

Johnson wouldn’t reveal what it’s been like dealing with those expectations. He didn’t want to go there. But he isn’t the only quarterback in the country whose career isn’t going as flawlessly as recruiting experts expected.

Take Narcisse. He trained with Johnson at several of the top high school quarterback camps. Narcisse said he didn’t compare himself to Johnson then and can’t do that with Tagovailoa and Fromm now.

“To go out there expecting to be one of the best guys, it’s challenging,” Narcisse said. “Sometimes you’ve got to take yourself out of it. Really, you can’t compare your situation to anybody else’s situation.”

Then there’s Brennan, who expected to be the Tigers’ starting quarterback as soon as his sophomore season in 2018. But then they recruited Ohio State transfer Joe Burrow, who took the starting spot from Brennan. Burrow has emerged as a Heisman frontrunner, and Brennan had to spend even more time than he hoped at backup. He recently tweeted: “BREAKING NEWS: I’m not transferring. Never have thought about it and don’t see myself doing so.”

Everyone had assumed he’d leave Baton Rouge because of his pedigree and his lack of opportunity. But Brennan never thought about it and is committed to make it work at LSU.

“Top guys in our class still not starting at this level, that puts it all into perspective,” Brennan said. “I know that Hunter wants it just as bad as I do. I’d just tell him to keep working hard every day and prepare like he’s going to be the starter.”

When Brennan feels disheartened, he said he reminds himself that even the best guys in the 2017 class didn’t make it big right away. Tagovailoa famously sat his entire freshman season until the second half of the national championship game, and even after leading his team to a dramatic comeback win he spent the next eight months in a daily quarterback competition with Jalen Hurts.

Fromm didn’t get to play until then-sophomore Jacob Eason got hurt in the season opener, and Fromm might have transferred like Ohio State’s new quarterback Justin Fields if he didn’t get that opportunity in 2017.

Tuguaviloa and Fromm both got a little lucky along the way, and they also took advantage of a single opportunity that changed the rest of their careers. Johnson can get another shot Friday, in primetime against the No. 4 team in the country.

Fitzgerald said sometimes it looks like NU’s quarterback is taking his time in the pocket and “whistling the national anthem.” This wasn’t exactly a ringing endorsement of Johnson’s first four games.

But they still think highly of Johnson around here. The Cats didn’t reach out to transfer quarterbacks this spring –– even Fields, who Fitzgerald has a relationship with. Having Johnson in the fold is likely one of the reasons why.

Fitzgerald said Johnson is having a difficult time learning the offense compared to the veteran quarterbacks on the roster. Despite having “all of the talent in the world,” according to offensive coordinator Mick McCall, he’s completed only 48.3 percent of his passes.

“Everybody wants immediate satisfaction,” he said as he starts snapping his fingers. “They say ‘Give me immediacy.’ But life doesn’t happen that way whether our society thinks that or not. Life does not work that way.”

After McCall’s fingers stop, he says to look at all of the quarterbacks drafted No. 1 in the NFL and consider how many haven’t panned out. McCall says the difference between Tom Brady and a quarterback who doesn’t make it are “little innate things” that the people who rank high school quarterbacks can’t see.

McCall doesn’t believe in “five stars.” Instead, he believes the biggest indicator for a quarterback is those innate things he can’t coach like the ability to read a defense and make the right decisions in the pocket. He’s spent this season trying to bring those qualities out of Johnson.

“It just doesn’t happen overnight,” he said. “You see five star and you think ‘oh, hey,’ but it’s not that easy. Some guys are going to take longer than others, and that’s OK.”

Even though Johnson is still growing as a quarterback, he’s been praised for the positive steps he’s taken this year. When he watches film, he focuses on the plays that look like catastrophes. Then in practice, he gets reps in those same situations and works on improving. He gives himself a second chance to make the right choice.

Johnson has also broken out of his shell since the season started. Redshirt freshman running back Drake Anderson said he didn’t know Johnson that well and thought of him as a shy person. But since September, he said they’ve bonded. Senior wide receiver Riley Lees said Johnson has started to become a more vocal presence in the huddle.

He’ll be back in the huddle Friday night, whether he starts the game or not. McCall said Johnson and Smith will both be in the mix. He can only ice his shoulder for so long. Eventually, he has to get back on the field and determine whether or not he’ll live up to expectations.

“This is a tough start, but you’ve got to learn from those mistakes and move on,” he said. “That’s part of playing football and that’s part of the season. You’re going to take some hits every once in a while and get some bumps and bruises along the way. But I’m feeling good.”