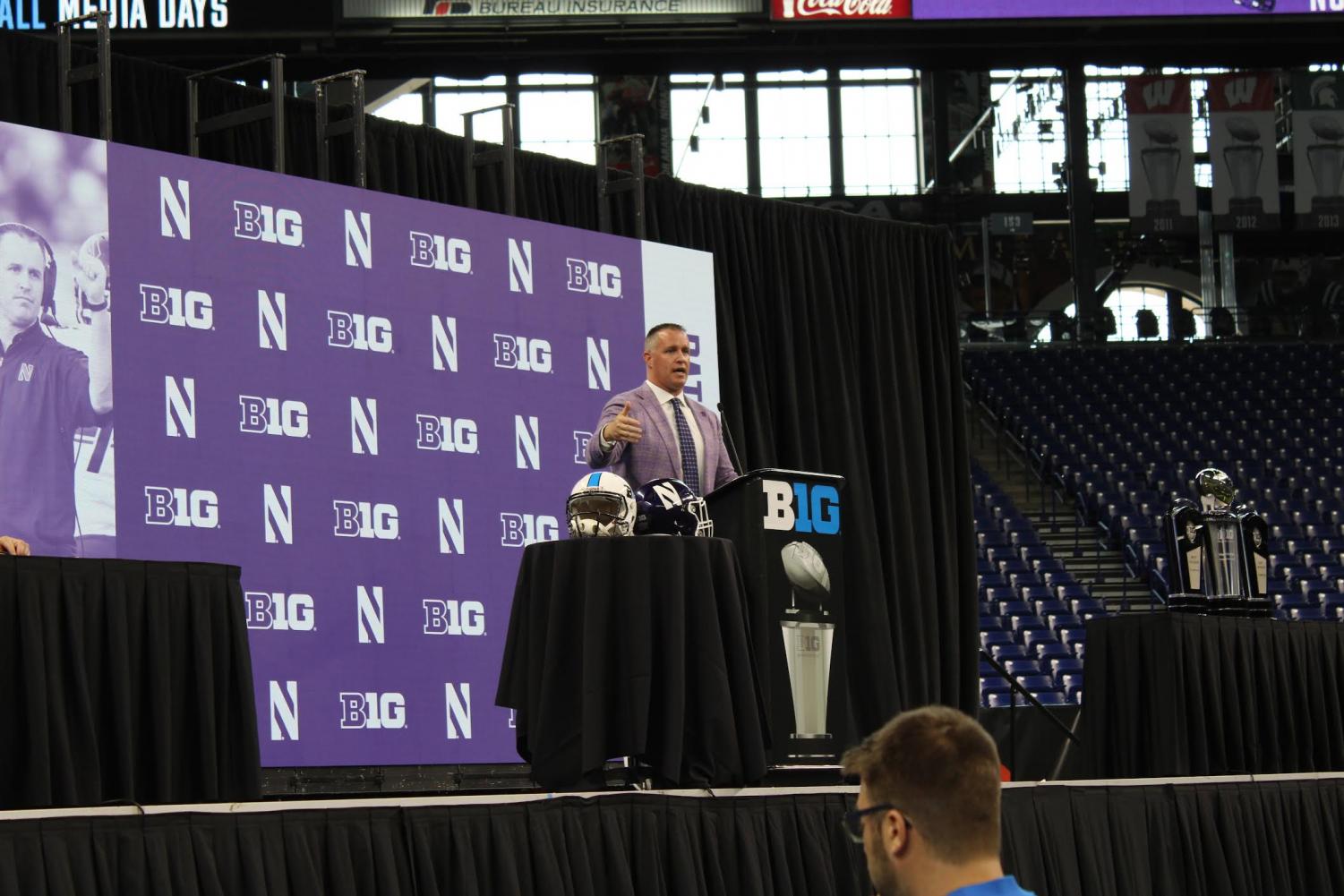 INDIANAPOLIS, In. — As Northwestern head coach Pat Fitzgerald climbed up to the stage at Lucas Oil Stadium, “Go U, Northwestern”  played through the loudspeakers. Within seconds of beginning his speech, Fitzgerald — donning a purple suit and a purple tie — said he wanted to listen to the fight song again in Indianapolis.

If Fitzgerald and the Wildcats make it back to the Big Ten Championship, they certainly will. Coming off two Big Ten West titles in the past three seasons, Fitzgerald, senior offensive lineman Sam Gerak, sophomore safety Brandon Joseph and sophomore running back Cam Porter appeared at Big Ten Media Days on Thursday. They spoke on topics ranging from name, image and likeness legislation to their quest to appear at the conference championship game for the third time since 2018.

As a player, Fitzgerald was a two-time All American and a member of the 1995 and 1996 NU teams that won the Big Ten title. Finishing his collegiate career with 299 tackles, he believes he would have reaped the benefits of name, image and likeness legislation.

“I’m not going to lie to you, I’m a little jealous,” Fitzgerald said. “I mean, think about the mid-90s, the dough I would have made.”

On July 1, the National Collegiate Athletic Association began allowing student-athletes to make money off their name, image and likeness. Fitzgerald called NIL a great opportunity, but he emphasized having resources to educate players and their families about the new opportunity.

He added that he hopes the Big Ten and NCAA will eventually share advice on how to navigate players’ NIL rights. Fitzgerald said players need to be careful about not setting their market too low and be smart about who they work and associate themselves with, especially those who project to go to the National Football League.

“If they can manage it, and we do a really good job helping them, it’s a huge benefit,” Fitzgerald said. “If they mismanage it, their academics are gonna go down, they’re not gonna play well and all this stuff is gonna go out the wayside.”

One of Fitzgerald’s players already has an NIL strategy planned.

Joseph is allowing his mother, an attorney for Texas A&M University, to handle all his NIL matters. As the reigning Thompson-Randle El Freshman of the Year and a consensus All-American in 2020, Joseph is one of the Big Ten’s most well-known players. He said he has been in contact with companies like electronics apparel company OtterBox regarding social media promotion.

Meanwhile, Porter has yet to be approached with any NIL proposals, but called them “long overdue” for college athletes.

“It was definitely a blessing and it’s an opportunity for student athletes to build their brands, which is awesome,” Porter said. “I’m really just focused on having the best season I could possibly have. If the (opportunity) presents itself, it presents itself.”

NU looks to return to conference title game in 2021

On Thursday morning, the 2021 cleveland.com Preseason Big Ten Poll projected a third place finish for the Cats in the Big Ten West next year. None of the 34 voters gave NU a first-place vote.

“We get ranked third (or) something like that, I’ll be like ‘Wow, that’s a first,’” Joseph said. “We usually get ranked last and we go ahead and shove it to the side and go do what we do.”

During the 2018 and 2020 seasons, the Cats defied preseason predictions with a trip to Indiana’s capital. They will look to do the same in 2021.

Answering questions in the same place where NU fell to the Buckeyes 22-10 in the 2020 Big Ten Championship Game, Porter said he believes last year’s loss will impact his performance this season.

“Pulling up to the stadium, I had a little bad taste in my mouth,” Porter said. “It obviously is motivation to try to come back and finish the job that we didn’t finish last year, so I can’t wait.”

Big Ten teams will play a full 12-game slate in 2021 with nine conference contests following a conference-only, nine game schedule last year due to the pandemic.

Due to Peyton Ramsey’s departure for the NFL, NU is currently searching for a new starting quarterback. According to Fitzgerald, the competition is between South Carolina transfer Ryan Hilinski, senior quarterback Hunter Johnson and senior quarterback Andrew Marty. He said a starter will be named during preseason camp.

“All three guys are incredibly talented,” Gerak said. “Whoever ends up winning the job, I know (offensive coordinator Mike) Bajakian is going to have (them) ready for that Friday night game.”

A few hours after Big Ten commissioner Kevin Warren announced the creation of a Chief Medical Officer for the conference, Fitzgerald revealed that close to 95 percent of his team is vaccinated.

Fitzgerald, who said he is vaccinated, said it is a personal choice and he will support any player who chooses not to get the shot. He added that policies and procedures will be created for the players who didn’t get vaccinated “to keep them healthy and safe.”

Warren said each Big Ten institution has been creating its own policy regarding COVID-19. Before the season, however, the conference will combine the findings to create a united decision.

Northwestern has mandated the COVID-19 vaccine for all students except those who were granted an exemption for the 2021-22 academic year.

Fitzgerald later said that he is a “big fan” of the proposal to expand the College Football Playoff. On June 22, the CFP Board of Managers recommended a study to analyze if the sport’s postseason tournament should move from four teams to 12, the latest step in what is likely the event’s impending expansion.

He commented that details such as the number of games and the offseason schedule need to be ironed out. Fitzgerald then added that he would “hate to see” the bowl system disappear and hopes it can be preserved under an expanded playoff field.

However, he would look forward to welcoming an opponent to Ryan Field if the Cats made the first round under the new proposal, which could begin as soon as the 2023 season.

“I’d love to bring some guys up from the South in December to Chicago,” Fitzgerald said. “I’d do cartwheels. I think it’ll be awesome.”