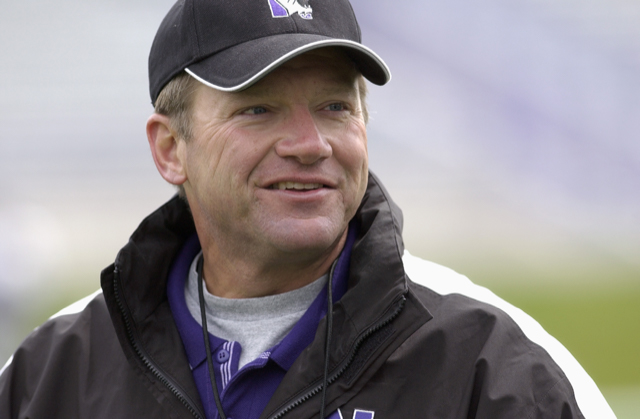 Before the 2010 Outback Bowl, Pat Fitzgerald inserted a trick play into the game plan. It was one the Northwestern coach figured could, at the very least, generate a first down in a critical situation against Auburn.

Little did he know the play would nearly help the Wildcats notch their first postseason victory since the 1949 Rose Bowl.

With his team down 38-35 in overtime, backup kicker Steve Flaherty lined up for what looked like a game-tying field goal attempt. Instead, holder and quarterback Dan Persa handed off the ball to receiver Zeke Markshausen, who sprinted right toward the end zone. He was stopped at the two-yard line, foiling Fitzgerald’s plan and giving the Tigers the victory.

Running a modernized form of the fumblerooski carried a special memory for Fitzgerald. It was one of predecessor Randy Walker’s favorite plays.

“He would have put his arm around me and would have said, ‘You gotta move fast,’ what we called a fastball back then,” Fitzgerald, who was Walker’s recruiting coordinator and linebackers coach, told The Daily.

Compiling a 37-46 record in Evanston, Walker took NU to three bowl games and won a share of the Big Ten Conference title in 2000, comprising only a small part of his purple-and-white legacy.

Walker instilled discipline and mental toughness in his players while sharing his affable personality with the Cats. He imparted wisdom on coaches and players who would eventually join NU’s coaching staff. The Four F’s — football, field, force and focus — were Walker’s keys to winning, elements of which endure under Fitzgerald.

Following a 7-2 2020 season and a No. 10 ranking in the final Associated Press Top 25 poll, Walker’s impact remains evident 15 years after his death as the Cats continue their climb into the national spotlight.

“When we keep winning, they’ll come”

Walker arrived on the shores of Lake Michigan in 1999 after serving as head coach at Miami University in Ohio, his alma mater. He won three games his first season as the successor to Gary Barnett, who took NU to the 1996 Rose Bowl.

“A lot of people were worried: ‘Well, Gary Barnett’s leaving. He’s been the guy who turned the program around,’” Dave Eanet (Medill ’77), sports director at WGN Radio 720, said. “And Randy — after ’99, kind of a transitional year — was able to show that you could turn around and find a different way to win a Big Ten Championship.”

Walker adopted a version of the spread offense with then-offensive coordinator Kevin Wilson during the 2000 season that gave the Cats the nation’s No. 3 total offense. He also developed a sense of belief within the Cats’ locker room.

“He always would say (at) the first game of the year, ‘There may not be a lot of people in the stands, but when we keep winning, they’ll come,’” Ayeni said. “And we kept winning.”

Walker led the Cats to road victories over No. 7 Wisconsin in overtime and Minnesota. The team then defeated No. 12 Michigan 54-51 in front of a home sellout crowd. As the Cats finished the regular season 8-3 with a share of the conference title, Eanet said Walker gave the program “two or three of the most memorable games in Northwestern history.”

He said Walker’s squads prioritized outlasting opponents and responding to whatever was thrown the team’s way. According to Ayeni, the Cats exhibited these tenets in 2020 against Iowa — using three interceptions and a dominant run game to turn a 17-0 first quarter deficit into a 21-20 victory. He also saw them when the Cats forced five turnovers to beat No. 10 Wisconsin.

“He took things a day at a time”

Tammy Walker said her husband didn’t just take a person’s football mind into account during the hiring process. He cared about who they were as people. He paid attention to the kind of family they had.

Walker also made sure to make colleagues feel welcome, she said. A way he achieved this was by inviting new coaches over to his house after games, including losses.

In Evanston, Walker became known for his post-practice activities with Magic, his Labrador Retriever mix. At the practice field behind Anderson Hall, he would play with the dog, who sometimes would run sprints with the players. According to Tammy Walker, Magic was named after “Miami Magic,” when Walker would lead the Redhawks to upset victories.

One of these victories came in 1995 against No. 25 NU, who just two weeks before defeated No. 9 Notre Dame, sparking dreams of a Rose Bowl season.

“I just always appreciated the fact that after a long, sometimes grueling practice with a big game coming up,” Eanet said, “he got tremendous joy from having that dog come out on the practice field at the end of the day.”

When it came to competition, high expectations were the norm. Walker’s style of coaching heavily influenced Fitzgerald, who succeeded him a week after his passing. The program’s all-time winningest coach with 106 victories, Fitzgerald credited Walker’s emphasis on trust, attitude and investment for creating the blueprint of NU’s culture.

One way his legacy continues is with the Cats’ two-by-four “TRUST YOURSELF” board. Created during Walker’s tenure, players touch it before and after games as a reminder of one of Walker’s key tenets.

Fitzgerald has added new values during his tenure through the Pyramid of Success and the team’s Leadership Council. But he said Walker’s imprint on team culture has persevered.

During last year’s training camp, Ayeni created a trivia game for the running back room about the history of NU football.

He wanted to teach his players about everyone involved in the program during his four years as a player from 1999 to 2003, making sure to prominently feature Walker. Ayeni pulled up videos of his former coach talking and footage from the Cats’ 2004 overtime upset of No. 7 Ohio State.

“It’s so cool with social media, with YouTube,” Ayeni said. “Just to give the guys some context to go behind the talk or the situation. You try to do that… to let them know the history behind where this program was before it’s gotten to where it is now, and the architects and some of the guys who were the building blocks behind it.”

Ayeni and Fitzgerald are not the only members of NU’s coaching staff with links to Walker.

When coaches gather in the staff room of the Walter Athletics Center, they are reminded of Walker’s memory. Encased in glass is their former coach’s handwritten final practice plan.

A photo of the white board with Coach Walker’s practice outline. It was left untouched in the @NUFBFamily staff meeting room for over 12 years. It was recently encased and moved to the new Walter Athletics Center, new home for Northwestern Football. Thank you @coachfitz51 pic.twitter.com/lpc2qRi9wv

Fitzgerald found the plan during the early months of his tenure as head coach on a dry erase board. The plan — headlined “DO NOT ERASE” — outlines practice routines on Sunday, Tuesday, Wednesday and Thursday, with an off day on Monday and a meeting Friday. On the right side of the board, Walker listed the Four F’s and what parts of the game apply to them.

“Randy would be extremely proud”

On New Year’s Day 2021, Fitzgerald and the Cats met Auburn in the Citrus Bowl. He didn’t run a variation of the fumblerooski like he did in 2010, but he did lead his alma mater to a fourth consecutive bowl win.

Fitzgerald once again received interest from National Football League franchises after the end of the season. He spurned them all, signing a contract extension in late January to stay in Evanston until 2030.

A similar scenario unfolded with Walker, whom Eanet said was once on Ohio State’s radar. But Walker remained with the Cats, taking a contract extension in 2006 that would keep him in Evanston though the 2011 season.

“I just remember him being a guy who seemed really comfortable with where he was professionally (and) personally,” Eanet said. “(He was) happy to get a new contract, happy with a new house, loved Northwestern, loved where the program was.”

The extension was signed in April, two months before his passing.

Today, the Walker family remains close with the NU program. Tammy Walker has season tickets and looks forward to returning to Ryan Field this fall, a stadium whose northside terrace is named after her husband. Coaches like Fitzgerald and McGarigle attended the Randy Walker Legacy Foundation’s annual golf outing on June 21. Golf was one of Walker’s favorite activities, a hobby he took part in with Fitzgerald.

“We played a couple times a summer,” Fitzgerald said. “But his kids were grown, so I go home now and go to baseball games. He’d go to the driving range.”

This season, Fitzgerald is looking to lead a two-time Big Ten West champion squad back to Indianapolis. Now in his 16th year at the helm, the former star linebacker has a team ready to compete and coaches ready to win, in part representing the lessons he learned from the man who brought him back to Evanston.

“I’m sure Fitz has followed a lot of what he did,” Tammy Walker said. “But, he’s put his own mark and his own stamp on things. There’s some things I think Fitz probably does better.”

“Randy would be extremely proud.”