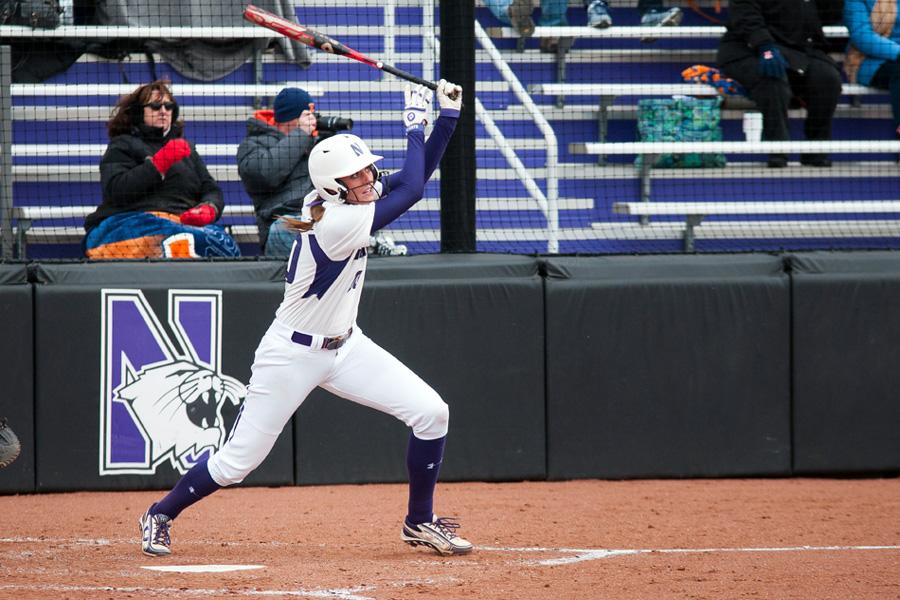 Andrea Filler makes contact during her senior season at Northwestern. The two-time First Team All-Big Ten selection has since played for domestic teams in Chicago and Saronno, Italy.

2021 has been an eventful year for Andrea Filler (Communication ’15, School of Professional Studies ’16). After getting married to Northwestern baseball alum Kyle Ruchim (Weinberg ’14), Filler fulfilled her longtime goal of becoming an Olympic athlete on July 4, when the Italian national softball team announced its roster for this summer’s Olympic Games in Tokyo.

Olympic qualification represented yet another milestone in a long journey for Filler, who was almost left off of the Italian squad. She had to win a court case to earn dual citizenship from her maternal great-grandmother, challenging a national law that only allowed such citizenship to be passed down along the father’s side of the family.

Filler, who is also director of operations for Northwestern softball and field hockey, has played in domestic leagues for the Chicago Bandits and A.S.D. Saronno. Recently, she helped Italy win its second consecutive European Championship.

The Daily spoke with Filler about her Olympic selection, playing during a pandemic and her softball journey thus far. This interview has been condensed and edited for clarity.

The Daily: How does it feel to represent Italy in an international competition?

Filler: The personal significance for me is, number one, to take my career to the biggest stage available for our game, and secondly, represent for my family. Represent all the people that have been involved in my career, but for my great grandparents, my grandparents, my parents, my siblings; it’s an honor to be able to represent them on the Olympic stage and play for my heritage.

The Daily: This is the first year since 2008 that softball is back at the Olympic Games as a featured sport. Why is it important that softball gets this global showcase?

Filler: Softball is in a place right now where we’re in an upward trend, with the Women’s College World Series. It’s so important that the sport keeps getting exposure nationally, internationally on TV, to continue to grow the sport and to take it to the level that it deserves to be at.

The Daily: Does COVID-19 make the Olympic experience any different than you would have imagined?

Filler: We’ve had our entire routine adjusted for COVID. We’re in a bubble here in Sendai, (Japan) — we test every morning; we’re not allowed to go outside of our hotel aside from going on the bus to the field. We’re really not able to experience some of the things in our host cities that I would imagine other Olympians were able to experience.

At the same time, I think that it’s a positive because it’s keeping our team together and we’re really experiencing each other, which is a really great thing when you’re here. There’s a lot of distractions. I can imagine that having a lot of fans, having family members around could be a huge distraction to the experience. But you just find a way to adjust to feel like you’re experiencing it with your family and most of the people who support you as well.

The Daily: Do you view your role on the national team differently than your role for Saronno or the Chicago Bandits, or even thinking back to your time at Northwestern?

I joined (the Italian national team) in 2019, so there’s a lot of things that you have to learn in a short amount of time. Along with just being a newer member, your role changes. My role at Northwestern was more of a leadership position. Here, I’m taking a little bit of a step back in some ways, because of my being a newer member on the team and also having a language barrier.

At the same time, your approach to the game and who you are as a person on the field — for me, that hasn’t changed. Every day, I try to go out and just be a true professional and pass along my knowledge to the people that I’m playing with, try to make my team a little better every day. In that way, my role is the same. That’s the one thing that I always fall back on.

The Daily: Former Italian national team coach Enrico Obletter died in February from COVID-19. What’s it like to compete without him?

Filler: We came together during the European Championship (in June and July) for the first time since his death, and it was emotional for everybody. We had a lot of moments where he was recognized by the tournament, which was so nice, but it really hit our team. There were some games where we had a lot of tears running out onto the field before the game started, after a moment of silence. That’s something that you can’t ignore, because it’s more than the sport.

Our team really came together to really honor him the best way we knew how, and that was to win the tournament. It was really great that we did win the tournament in his honor because we’ve just been working so hard. We knew that he would be so proud, but also that it doesn’t stop there. And no matter what happens at the Games, I think that we’re all just proud to continue to play for him and to remember his words in the back of our mind as we play. His approach was so great. He didn’t let us overthink; he really pushed us to be aggressive and never back down to anybody.

The Daily: When did the realization of “I’m an Olympian” dawn on you?

Filler: The day after the European Championship final. It was a little bit later in the day, around maybe one o’clock; they called in a team meeting. In the meeting was when they announced the roster. Obviously, it’s very nerve-wracking, sitting in the room, waiting to hear your name be called. After my name was called, it was just a rush of emotions. The “I can’t believe it, I’m going to the Olympics” moment — it really doesn’t feel real. It doesn’t set in right away. And we had a moment as a team, where we were able to congratulate each other and say goodbye, unfortunately, for some of the people that didn’t make it.

I don’t think the moment really set in until we got on the plane from Rome to Tokyo. We all looked around at each other as we were about to board the flight, and we were like, “We’re really doing this; we’re going to the Olympics; we will be in Japan tomorrow, and it’s real. We’re Olympians.”

— Curtain Call: Fifth-year seniors Andrea Filler and Amy Letourneau lead the way both on and off the field