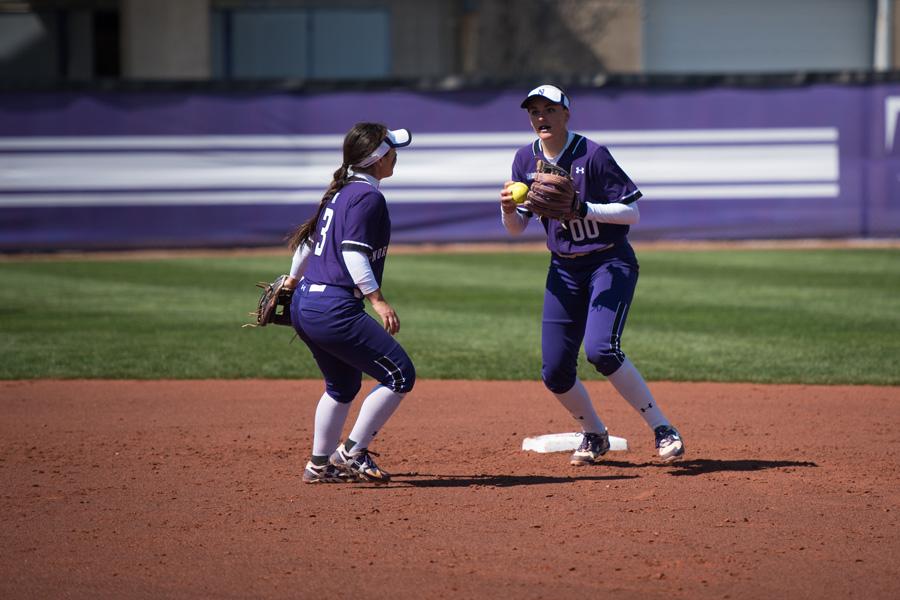 Curtain Call: Fifth-year seniors Andrea Filler and Amy Letourneau lead the way both on and off the field

Out of the seven seniors in the softball program, Amy Letourneau and Andrea Filler have become known as the “grandmas” of the team.

In a season that had its ups and downs, the two took charge as the only fifth-year seniors the program has ever seen besides 2014 grad Emily Allard. Each led the team in several statistical categories at the plate, and Letourneau was also a force on the mound, going 15-11 over 42 appearances with an ERA of 2.87.

“It’s unique because the softball program has never had two fifth years at a time,” Filler said. “I think we’ve definitely seen an age divide between us and especially the freshmen, it’s an extra challenge for us as leaders of the team.”

However, the relationship between Letourneau and Filler goes beyond age. The two have quickly become the best of friends as they battle both the highlights and frustrations of the game — and graduate school.

Filler, who is pursuing a master’s in sports administration, and Letourneau, who will receive a post-baccalaureate certificate in finance, have leaned on each other this year as they learned how to lead a team much younger than they are.

“We’re best friends and we’ve gotten super close over the last couple years,” Letourneau said. “We’ve been through different experiences and having her with me, it makes me feel more comfortable being this old and learning to relate to the freshmen.”

The evolution of a leader

Filler, who transferred from Boston College after her sophomore year, found herself adjusting quickly to the Wildcats’ softball program.

On the field, she made an immediate impact in Northwestern’s batting lineup, starting every game and hitting .333 in her first season with 40 RBIs. Statistically, her play got better each year, and the shortstop led the team with 16 home runs and 59 RBI this season, along with a slugging percentage of .739.

But off the diamond, Filler found herself surprised at how easily she was able to adapt to her newfound community.

“It was interesting because I was essentially in three classes when I first got here,” Filler said. “Academically I was a junior, athletically I was a sophomore, but I was also brand new so I was a freshman. But I didn’t feel like a newcomer and that’s something extremely special to this program, we treat each other as family.”

Although Filler’s journey to NU may have been unique, her reasoning for transferring was simple: she wanted to become a better softball player. After suffering a season-ending wrist injury during her sophomore year at Boston College, she began to wonder if she would have the opportunity to shine elsewhere.

In 2015, Filler won the shortstop position at NU, a change from Boston College, where she had played second base.

“It was hard to get going, I wanted to come to here because I knew I wanted to become a better softball player,” Filler said. “A lot of days I would leave practice frustrated but I knew they were taking me to a new level.”

Filler’s work ethic quickly became representative of the program itself, as Kate Drohan has emphasized grit and toughness as being important aspects of the NU softball program.

But for Filler, her first glimpse at what it meant to play NU softball came during her first season with the Cats at the annual season-opening Kajikawa Classic.

“Someone hit a double and the dugout erupted … it was something that was so brand new to me,” Filler said. “There’s just a passion and a fire that the coaches instill in you from day one. It’s hard to put into words, but you have this notion of how much hard work you’ve put in all year and it comes out on the field.”

Throughout the season, Filler’s main focus was to keep the team motivated as a leader, while also remaining confident at the plate. Although that confidence has clearly shown, Filler noted that her leadership style especially evolved this season.

“For me, I was always really comfortable leading by example, and this year has really pushed me to lead more vocally,” she said. “It’s helped me develop that type of skill, something that you can apply later on in life.”

Staple of the program

Letourneau’s role on the team has also consistently evolved, more so due to her versatility at the plate and on the mound. The ace has been at NU since 2012, and has watched as her classmates graduated and fresh faces entered the program.

Although she suffered a season-ending injury in 2014, her ERA over five years currently sits at 3.45, with 648 strikeouts as well. Off the mound, Letourneau has been just as effective, hitting .332 over five seasons with 165 RBIs and 44 homers. This season, she led the Big Ten in RBI with 29 during conference play.

With stats that fly off the page and honors to boot, Letourneau’s fiery leadership in the dugout has become a staple of the program.

“Amy’s a lot of fun, she has a great spirit about her and she’s got really good spunk,” Kate Drohan said. “That’s the kind of person you want in the heat of the moment.”

Letourneau draws much of that competitive spirit from five years of battling tough Big Ten opponents, injuries and from her teammates. As a freshman, she watched elder teammates like Adrienne Monka and Kristin Scharkey on the field and hoped to emulate their toughness.

What she began to realize, however, was that the fire and competitiveness of her teammates came not just from their own energy but from the way the Drohans have positioned the program throughout the years.

“My freshman year, Kristin Scharkey was that crazy passionate person, and you think, ‘Oh wow, that’s Kristin,’ but no that’s our program,” Letourneau said. “I think about my freshman year and the fact that we’ve been able to carry it on, it really shows it’s Northwestern softball, it’s not just one team, one year.”

As a leader, Letourneau spent this season teaching the squad’s younger pitchers.

“I’m excited to see everyone else take that next step, the places that you get to go out of this program are unbelievable,” Letourneau said. “Watching everyone come here and really find themselves, find what you want to do and create a life from it, I get excited to see people do that and to see this program succeed.”

As fifth year seniors, both Filler and Letourneau embraced their roles as the team grandmas — a joke that even the coaches encourage.

With the new title, however, came the need for both to take on a larger role within the team. The two became the leaders of the squad, taking this year’s freshmen under their wing while also keeping spirits high in the dugout during a tough stretch before the start of conference play.

“We’ve learned to be really comfortable with it and have fun,” Letourneau said. “Coming into Big Ten play, we didn’t have the preseason we wanted to have and we were able to embrace our role and really put the team on our backs when needed.”

Letourneau, who sat one game during the Michigan series due to an elbow issue, has battled adversity after a season-ending injury in 2014. Even so, her determination and spirit have remained strong, something noted by both Drohan and pitching coach Michelle Gascoigne.

Gascoigne, who joined the squad this fall, focused this season on strengthening one of the team’s strongest assets: its five-pitcher rotation. She noted that Letourneau’s leadership will leave a lasting influence on the younger pitchers.

“Amy does a good job of leading both sides of the field, especially being a strong athlete, it’s really good for the young ones,” Gascoigne said. “Especially Kenzie (Ellis), who has been following her around all year, I know she’s learned a lot from her leading by example and stepping up in big situations.”

Being a driving force for the freshmen was extremely important this year, with Morgan Nelson starting at third base, and both Ellis and Kaley Winegarner starting several games.

Nelson’s relationship with Filler also developed over the year, especially with Nelson as the presumed heir to the starting shortstop spot. Nelson said Filler has shown her the importance of both hard work and humility.

“For her to be as humble as she is and to do as well as she’s done is inspiring to me,” Nelson said. “She’s a really good leader and it shows on the field too.”

As the 2016 season has ended, it is clear that both Filler and Letourneau have made their mark on the program.

However, Filler, who has been invited to tryout for the Chicago Bandits, a professional softball team, and Letourneau, who will pursue a career at WH Trading, a Chicago-based trading firm, said they tried not to think too much about the ends of their careers.

“I told myself, I’m coming back for this fifth year to play softball, I don’t want to get caught up in ‘That pitch wasn’t good, I gave up a home run,’” Letourneau said. “Being in the moment and being with teammates, the two of us have been able to work with everyone to get that competitive mindset back. We’re here to play the game and nothing other than that.”

Filler, who ranks third in program history with 40 doubles despite having been at NU for only three years, said she is simply thankful for the time she had as a Wildcat.

“It’s really easy to get caught up in our schedules, easy to forget what you love about softball and NU; lately I’ve been reminding myself of that often,” Filler said. “I wish everyday that I could’ve started here from the beginning.”