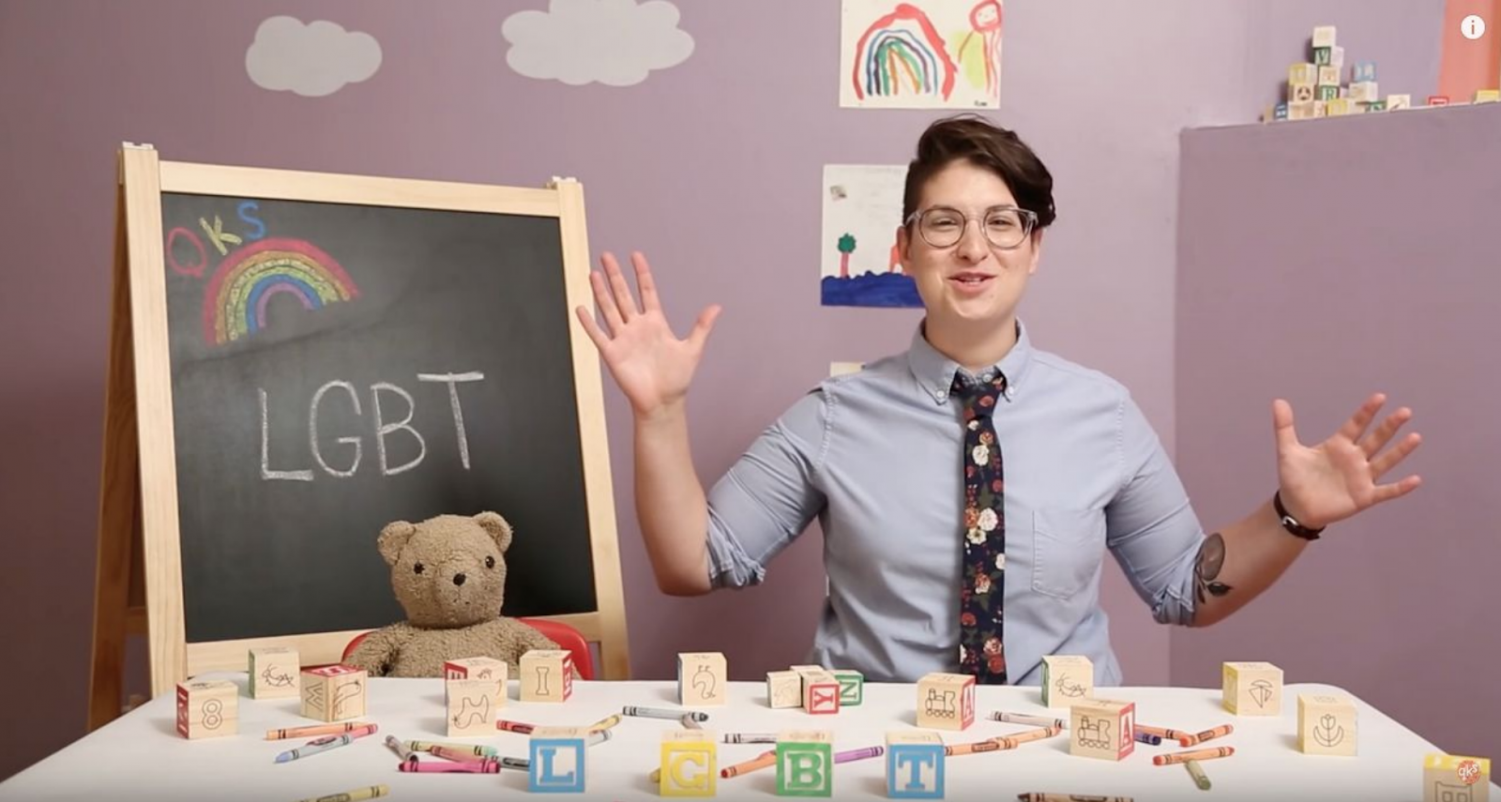 Lindz Amer (Communication ’14) on the set of their webseries “Queer Kid Stuff.” The show was a 2018 Webby Honoree. (Photo courtesy of Queer Kid Creative)

Lindz Amer (Communication ’14) on the set of their webseries “Queer Kid Stuff.” The show was a 2018 Webby Honoree.

During their time at Northwestern, Lindz Amer (Communication ’14) was not a “StuCo hotshot.” They weren’t cast in shows, didn’t get into the playwriting sequence and didn’t have a reputation for being one of the stars of the theater department.

Seven years later, the nonbinary alum is coming off of a four-season run of “Queer Kid Stuff,” a webseries for kids centered around queer narratives that became a 2018 Webby honoree. Episodes touch on topics from what it means to be gay to mental health, privilege and pride. Amer’s senior thesis work at Northwestern, centered on queer representation in children’s theatre, provided the background for “Queer Kid Stuff.”

For the practical part of the thesis, Amer directed Purple Crayon Players’ performance of “The Transition of Doodle Pequeño,” a children’s play that delves into gender identity, homophobia and immigration, as well as friendship and individuality. The play opened in Norris University Center and was later performed at an Evanston elementary school. After doing a workshop with the students in the audience to prepare them for the ideas in the show, the principal rushed down the aisle toward Amer.

“We were in full view of the audience, and she was asking me if we were promoting cross dressing and all this stuff. And I was just like, ‘can we pause this conversation until after the show is over?’” they said.

The principal backed off and let them finish, but afterward she had a tense conversation with Amer. Afterwards, the principal called the next school on the tour, and the school canceled the show.

Despite the disappointment and frustration that came with the cancelation of a performance, students at an Evanston middle school did see the performance, Amer said. The administrators there were supportive and told students that paying attention to the play was important. Although it was a difficult experience and required a lot of resilience, it lit a fire under Amer.

“It was really interesting to come into contact with that controversy at the very start of my career, and I had a very intense emotional reaction when that was happening,” they said. “It was this work that I was trying to understand and starting to embark upon for the rest of my career.”

“Queer Kid Stuff” started just a couple years later, after Amer completed a Master’s in performance studies in the U.K. They watched YouTube when they got homesick, and determined that the platform could be the perfect place for an educational show. After filming the pilot, the show gained popularity and went on to span over 50 episodes. The show was then turned into a live performance that toured around the country.

After reaching stasis on YouTube and co-filing a lawsuit against the platform for discrimination against LGBTQ+ creators, Amer has started to move toward other platforms. They’ve been working on creating educational resources and a family podcast called “Activist, You!” that explains different social justice movements through interviews with youth activists. Still in the works are a book proposal based on Amer’s 2019 TED Talk on the importance of exposing children to LGBTQ+ narratives at a young age, a full-length screenplay and a few pilots of a live-action show for preschoolers inspired by characters from the original web series.

“I’ve been working on getting back to craft, trying to break into more mainstream work and try and make more queer, trans, nonbinary narratives in children’s media through the big guys,” they said. “I’ve also been trying to figure out what the larger business of it is because we still have an audience that’s not being served.”

Communication Prof. David Catlin was Amer’s theater professor for a few years and saw them grow throughout college. He still remembers their ability to transport the entire class to Denmark while they performed the ghost scene in “Hamlet.” Catlin said he always knew that Amer’s work would make the world better and challenge the status quo.

“What I admire about Lindz is that they found a way to take something that is deeply important to who they are and they have taken the idea of stories and storytelling, and they have put their energy and their heart into making something that makes the world better, that helps people identify who they are, and destigmatizes and centers queer narratives, but does so at that really important early age,” he said.

Kyra Jones, the assistant director of sexual violence response services and advocacy at CARE, appeared on an episode of “Queer Kid Stuff” that focused on race,. She said she loved contributing to social justice education for kids, especially on topics that even give some adults trouble.

Jones met Amer in their freshman year and took TYA courses together. Jones said they have only gotten closer since graduation, Jones said.

She said it’s been inspiring to see Amer continuously pushing for queer representation in children’s media over the past seven years, even when it’s been tough.

Jones appeared on an episode of “Queer Kid Stuff” that focused on race, and said she loved contributing to social justice education for kids, especially on topics that even give some adults trouble. She said it’s been inspiring to see Amer continuously pushing for queer representation in children’s media over the past seven years, even when it’s been tough.

Amer is determined to continue their work, especially as children’s media is slow to evolve and take up new topics, especially those surrounding representation and diversity.

“I think people are generally excited, but wary,” they said. “Things are definitely moving forward, so it’s exciting to see that all happen, but it’s also kind of like, ‘Let’s go, I’ve been doing this for a little while.’”

— The devil’s in the details: How artists’ smallest choices prove the need for representation in media

— The Magic of Good Representation: The impact of Willow and Tara, more than 20 years later