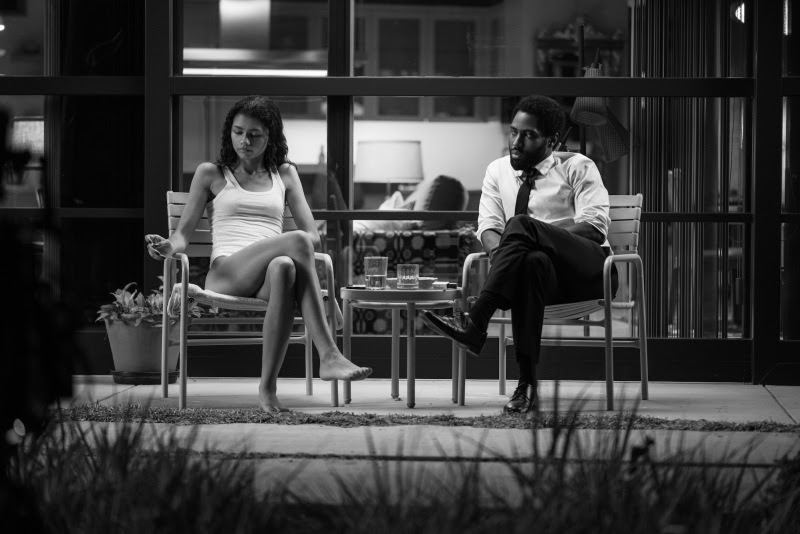 Marie (Zendaya) and Malcolm (John David Washington) sit on their porch discussing their most recent argument in Netflix’s “Malcolm & Marie.”

Despite critic reviews, Sam Levinson’s “Malcolm & Marie” is a riveting exploration of a failing relationship

Within two hours, Sam Levinson’s “Malcolm & Marie” explores emotional warfare, ever changing dynamics and intimate moments — all between a cast of two people.

Riding on the high of his critically acclaimed and Emmy-winning hit show “Euphoria,” Levinson dipped his foot into the world of filmmaking as a director and writer with his muse Zendaya and Denzel Washington’s son, John David Washington.

The product is the story of Malcolm, a burgeoning director, and his wife, Marie, a recovered drug addict and actress. The film is entirely black and white, a stylistic choice that is a great contrast from the very colorful and vibrant “Euphoria,” and has a very blatant lack of score, presumably so the audience can focus solely on the two stars.

The movie takes place at the couple’s home, after they return from Malcolm’s film premiere and Marie is clearly unhappy. Marie is unhinged; she wants a deep love and to have her skill and talent acknowledged, yet accepts behavior she knows is not fair. Malcolm is on the verge of a breakthrough in his career and is high off life the entire film, while Marie threatens his bubble of euphoria with sobering comments and constant fighting. What can only be described as an emotional boxing match ensues, as both attempt to win a battle of who can say the most hurtful thing to the other.

Zendaya has certainly more than proved her worth this past year, shedding her image as a mere Disney child actress and earning her first Emmy for Outstanding Lead Actress in a Drama Series, the youngest to ever do so. Her talent is undeniable in this film as well, with raw emotion oozing out of her every word and action. While Levinson brings out the best in her, this film might not have been such a challenge for her — her character was extremely reminiscent of an older Rue, the unstable teenage drug addict she plays in “Euphoria.”

While Zendaya’s portrayal is moving, she is outshined by Washington’s Malcolm. Washington has skyrocketed in the past year, first rising to fame in 2018’s “BlacKkKlansmen” and taking the lead in Christopher Nolan’s highly anticipated “Tenet” last year.

Washington fills the entire space of every scene he is in, going on five to 10 minute long monologues in which he uses a wide range of voice inflections, hand gestures and facial expressions to evoke a plethora of emotions. In many scenes, he mirrors his father, widely acknowledged as one of the greatest actors of all time. Washington dominates the film; his presence, which alone matches that of an entire cast, is exactly what this movie needed.

At one point, Washington’s character goes on a tirade against movie critics, touching on the impact of race on film reviews. He complains that as soon as the director is Black, the critique of their work becomes about being Black and how incredible it is that the film tells the story of Black plight, when it might have nothing to do with that.

“Malcolm & Marie” did not receive fantastic reviews. My theory is his monologue attacked many critics too personally, leading them to judge the movie extra harshly. While many said the movie was boring and dragged on, I was riveted the entire time.

Zendaya and Washington make it hard to look away from this couple fighting to stay together while falling apart at the seams.