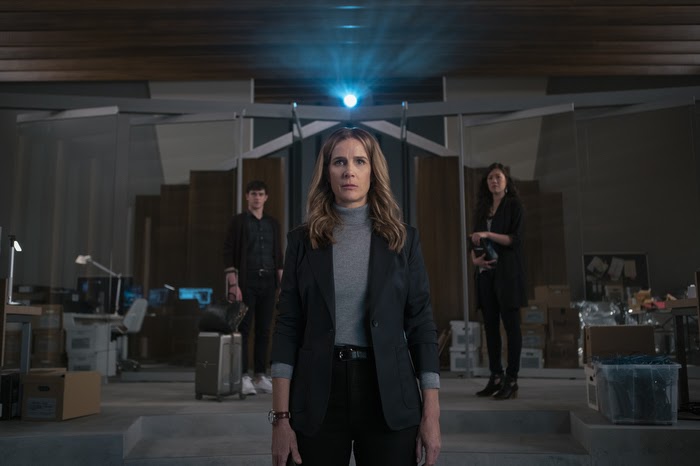 Gretchen Klein stands in the control room as she and her co-conspirators watch the girls struggle to survive on a deserted island. (Matt Klitscher/Amazon Studios)

Gretchen Klein stands in the control room as she and her co-conspirators watch the girls struggle to survive on a deserted island.

Feminism in “The Wilds” falls flat

At first glance, Amazon Prime’s original series “The Wilds” seems like the female answer to “Lord of the Flies.” A group of teenage girls must navigate survival after their chartered plane, en route to a female empowerment retreat in Hawaii, crashes near a deserted island.

The viewer soon learns that the crash is staged and the stranded girls are subjects of a social experiment led by ousted academic Gretchen Klein, who herself has taken more than a few pages out of Golding’s book.

(Warning, major spoilers for the rest of the season ahead!)

The experiment — packed with staged cameras, intrusive interrogations and strategically packaged suitcases — is an attempt to prove that society would thrive on a matriarchal structure. It’s so outrageous it feels like a fever dream, or maybe just bad fan fiction.

At one point, Gretchen even practices a presentation for potential donors against a backdrop of nuclear war to show the viewer just how dire the state of the world is under men.

The producers of the show want you to think she’s a villain at first. The episodes cut between the girls in hunger and in pain, and Gretchen in the control room gleefully celebrating the milestones they’re reaching: building a fire, finding shelter, discovering water.

There’s a slow shift in how the producers expect us to perceive Gretchen. We learn she has been fired from her teaching position for bold, radical thought. We watch her process the incarceration of her college-aged son, who participated in a fraternity hazing incident gone wrong. We are to sympathize with her as she grieves the loss of her friend and colleague Jeanette.

Gretchen, once a villain, becomes a supposed icon for feminism. Her uncompromising commitment to her vision makes her the fierce fighter for women struggling to thrive in a modern-day world tainted by patriarchal expectations.

There’s just one problem: the girls on the island aren’t thriving either.

Their time on the island is plagued by rifts caused by a scarcity of resources, childish slut shaming and the sheer trauma of believing that death is fast approaching.

We receive snippets of their lives before the crash through faux interviews that are as unethical as the rest of the experiment. A hired psychiatrist — posing as an interrogator — coaxes each girl into disclosing their adolescent trauma during faux interviews.

Season one never gives us a clear explanation as to why each of these girls was chosen, but the trauma they’ve overcome in the past is why Gretchen is so confident they’d succeed as a cohesive group on the island.

The girls’ trauma is also all uniquely gendered; God-fearing Christian Shelby has to hide her sexuality from her father, sweet and caring Martha was sexually assaulted by her male doctor and 16-year-old Leah is in love with an older man who took advantage of her.

Throughout their time on the island, their development is thrown in your face; Shelby kisses another girl, pacifist Martha kills a goat to overcome starvation and Leah throws away the book her love interest gave her. Only after that do they find the strength to band together so one of them can break out of the facility and free them all.

Gretchen romanticizes the idea that women must undergo the worst the world has to offer in order to wake up to their own internal power.

Gretchen is a morally gray antihero who subjects younger women to physical and psychological breaks in a bid to prove once and for all that women are stronger than men. But the quest to prove women are superior, at the cost of their well-being, grotesquely simplifies the challenges of a patriarchal society.

“The Wilds,” and the not-so-visionary social experiment the show is built around, is the product of a twisted understanding of feminism. But fortunately for “The Wilds,” we’re too starved for content to put it down.

— A love letter to Star Wars: The Clone Wars after seven memorable seasons