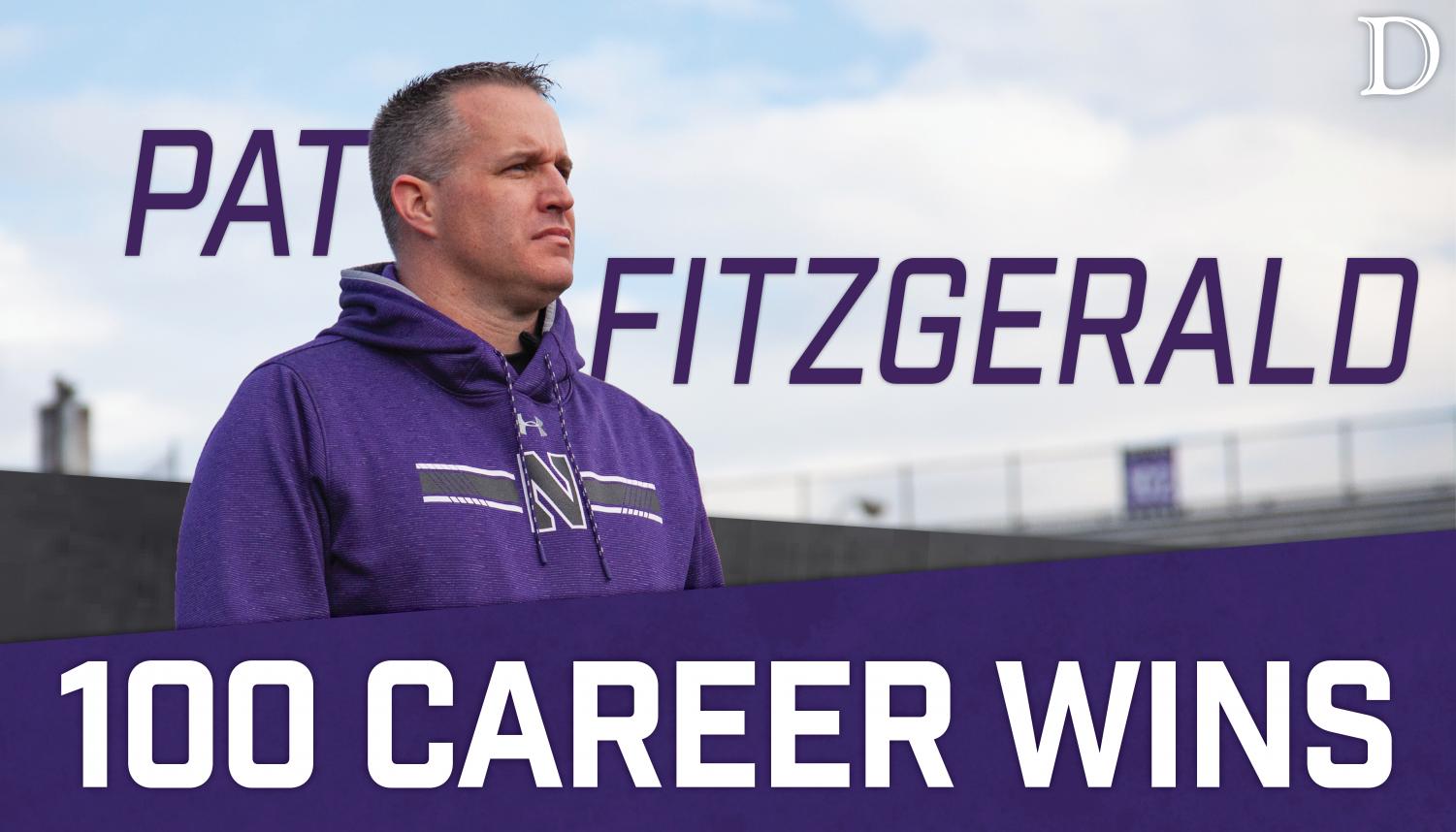 Football: The most memorable stops on Pat Fitzgerald’s journey to 100 wins

When asked to comment on the significance of reaching the 100-win plateau at Northwestern, Pat Fitzgerald paused and became emotional. He pulled out a list of all the captains he’s had since becoming the head coach of the Wildcats, and read out where they’d ended up.

His former players are everywhere. One works for Boston Scientific, another coaches at Yale. Some serve in the armed forces. And then there are the NFL players: Justin Jackson, Montre Hartage and Anthony Walker, among others. Clayton Thorson and Trevor Siemian are still lining up under center.

“It’s about the players. It’s about the families,” Fitzgerald said. “I’m so proud of those guys and I’m honored to be their coach, and I’m just sorry it took so long for us to get to 100.”

It’s fitting. Fitzgerald’s 100th win at the helm of NU’s football team came against the school where his journey commenced. Maryland is where he got his start as a graduate assistant. But Fitzgerald’s football career and legacy are inscrutably tied to Northwestern. Below are some of the wins we’ll remember best.

Pat Fitzgerald’s first game, and first win, at the helm of the Cats was one of his most meaningful. Two months after the sudden death of his mentor and predecessor Randy Walker, NU was set to play a non-conference game against Walker’s alma mater.

Fitzgerald, who was an assistant to Walker from 2001 to 2005, delivered a victory in the season opener. After the game, he handed the ball to Tammy Walker, wife of the late football coach.

“A lot of emotion was spent all game long,” Fitzgerald said immediately after the victory. “To go in there, it’s almost like when you commit to a school as a recruit. You kind of get the weight of the world off your shoulders, and you can just go forward and move on and don’t look back at maybe what you were thinking before the game.”

The Cats won with their defense. After allowing an NCAA-worst 33.9 points per game a year prior, NU shut the RedHawk offense out in the first half, sacking opposing quarterback Mike Kokal five times in the process.

“We’ve got a little bit of an attitude,” Fitzgerald said that night. “We have something to prove on defense.”

A massive win for personal and pragmatic reasons, the Cats’ victory over No. 9 Nebraska was instrumental in their run to a bowl game in 2011.

By defeating the Cornhuskers, Fitzgerald reached his 38th career victory and surpassed Walker for second all-time on the NU career coaching wins list.

Quarterback Kain Colter led the way, throwing for 115 yards and a touchdown after replacing injured starter Dan Persa in the second half. He also ran for 57 yards and two touchdowns in the effort.

His best play of the night was an 81-yard touchdown moonshot to Jeremy Ebert, which tied for the second-longest passing play from scrimmage in school history. That score put the Cats up 21-10 in the third quarter. The game would stay close before swinging NU’s way when Colter scored to put his team up 28-18 on a one-yard QB sneak late in the fourth frame.

“I’ve been singing his praises all year, probably more so than I have any other player, just because he deserves it,” Fitzgerald said that night. “When the ball is in his hands, usually good things happen.”

A midway point of Fitzgerald’s NU career, the Cats’ win against Mississippi State in the 2013 Gator Bowl in many ways marked their transition from wily upstart to perennial Big Ten West contender. NU’s first bowl victory in 64 years was Fitzgerald’s 50th career win in Evanston, and marked the first time any of his teams had reached 10 victories in a season.

The Cats dominated, jumping out to a 13-0 lead by the beginning of the second quarter and riding a school-record four interceptions to a 34-20 win over the Bulldogs. Led by current Tennessee Titan Trevor Siemian, who finished 12-of-20 passing for 120 yards, and Dan Vitale, who recorded seven catches for 82 yards, NU put on an offensive clinic.

The seniors had set the record for the Cats’ all-time winningest class at the time. Fitzgerald was proud of the legacy they were leaving behind.

“I’ve never been here before (after a bowl win), so I’m not sure how to act,” Fitzgerald said that night. “But there are so many lessons this team has learned, especially for our seniors throughout their journey, and it’s been a special journey.”
He was proud of reaching the half-century mark, but was quick to credit his success to the players and their families.
“It’s about our young men, all the great young men that I’ve had the privilege to be their head coach and very privileged to help them to grow and be the best they can,” Fitzgerald said.

It came out of nowhere. A listless NU team walked into Happy Valley to face a vaunted Penn State team that had all the momentum. Before a Week 3 win over Western Illinois, the Cats had lost two matchups against California and Northern Illinois. Quarterback Trevor Siemian looked inconsistent, and freshman running back Justin Jackson was still adjusting to college football.

But on that Saturday afternoon in Death Valley, the team put everything together. NU led by 14 at the end of the first quarter and scored another 15 in the fourth, holding the Nittany Lions to just two field goals in the process. Christian Hackenberg, a soon-to-be second-round pick by the New York Jets, threw the ball 45 times, completing just 22 passes while tossing an interception. On the other side, Siemian was efficient, completing 57 percent of his passes and grabbing a rushing touchdown.

“We haven’t been very good on offense,” Fitzgerald said of the performance. “We’ve been down a ton of receivers and skill guys… We’ve finally gotten them back since the bye week, and that allows us to get up to the tempo that we want to play at.”

The Cats’ defense was unstoppable — redshirt freshman Anthony Walker led the team with eight tackles and an interception. That came in the fourth quarter, a pick-six off the arm of Hackenberg that helped put the game out of doubt.

“They were dinking and dunking us on quick passes,” Walker said about the play. “(Hackenberg) looked me off a little bit, but I just made a great play I guess.”

This win came six weeks later, against a high-flying Notre Dame team led by volatile quarterback Everett Golson. Just two years before, the Fighting Irish were matching up in the BCS Championship Game against Nick Saban and the Alabama Crimson Tide. Now, they were succumbing to a relentless NU defense, led by Walker.

“This is a great team win,” said senior receiver Kyle Prater, who caught 10 passes including a touchdown that evening. “Nobody gave us a shot, but we kept saying we were going to shock the world, and we did that.”

It didn’t start that way. The Fighting Irish got off to a scorching start, with Golson finding the endzone on a 61-yard read-option just 44 seconds into the game. Notre Dame led 20-9 at the end of the first quarter.

That’s when the Cats found their game. A four-yard touchdown pass from Siemian and a short run into the endzone by Jackson put the NU ahead 23-20. Down 40-29 with 10 minutes left to go play in the fourth quarter, the Cats reeled off 14 straight points and won the game with Jack Mitchell’s field goal in the dying seconds of overtime.

“It was really cool, but tough to put in words,” Siemian said after the game. “I started running on the field when I saw it in the air and thought it had a chance… The craziest game of my life.”

NU had last played, and defeated, Notre Dame in 1995, led by Fitzgerald, then a junior linebacker. The triumph kicked off the improbable and legendary run to the Rose Bowl.

“This is a playoff win,” Fitzgerald said.

A program defining win for the Cats, one which proved NU could compete for postseason hardware, even in seasons where it wasn’t at its best early on. By outlasting Iowa and watching as Purdue and Wisconsin both lost on the same night, the Cats clinched the program’s first ever Big Ten West title. A team that had lost all three of its non-conference games was headed to play Ohio State for the Big Ten Championship Game in Indianapolis.

It was a drive that became famous because of a spectacular catch by wide receiver Bennett Skowronek, who dove into the end zone and just barely grabbed a ball that came sailing high from the arm of Clayton Thorson. That touchdown, and some stout late game defense, clinched the divisional title for the Cats.

“I’m just so proud of (the team). I’m really proud of them, I’m proud of the staff. We’ve been together for a long time, especially the seniors. Our fourth- and fifth-year guys have won a lot of big games. They’ve been through a bunch of tough defeats,” Fitzgerald said. “There was just something about this brotherhood that makes it such a joy and a privilege to be around every day.”

Things looked bleak for NU at halftime against Utah. Entering the game as a Top 25 team, the Cats conceded early and often. It all added to a common perception that Utah coach Kyle Whittingham simply could not lose bowl games.

And then, after halftime: pandemonium. NU scored 21 points off three Utah turnovers over the course of a nine-minute span in the third quarter. By the time both teams lined up to start the fourth frame of play, the Cats were up 31-20. That scoreline would stay for good.

The night belonged to Clayton Thorson, who was making his final appearance in an NU uniform, a fitting end to a career filled with victories. As he fought to complete the comeback, Thorson became the school’s all-time leader in passing yards.

Paddy Fisher shined, going after Utah’s offensive front with a dominant 13-tackle performance, Fisher’s fifth of the 2018 season. Chris Bergin came in clutch too, chipping in with eight tackles as the Cats kept the Utes from scoring for the entirety of the second half.

The win cemented the 2018 senior class as the winningest in NU history. Together, they scored victories 36 times in four years, coming away with three bowl wins and the school’s first-ever Big Ten West title.

After the game, Fitzgerald was asked to address speculation that he was a favorite for the vacant head coaching job in Green Bay. He shut that down immediately.
“Hashtag Go Cats, man,” he said. “I’m not going anywhere. This is home forever.”