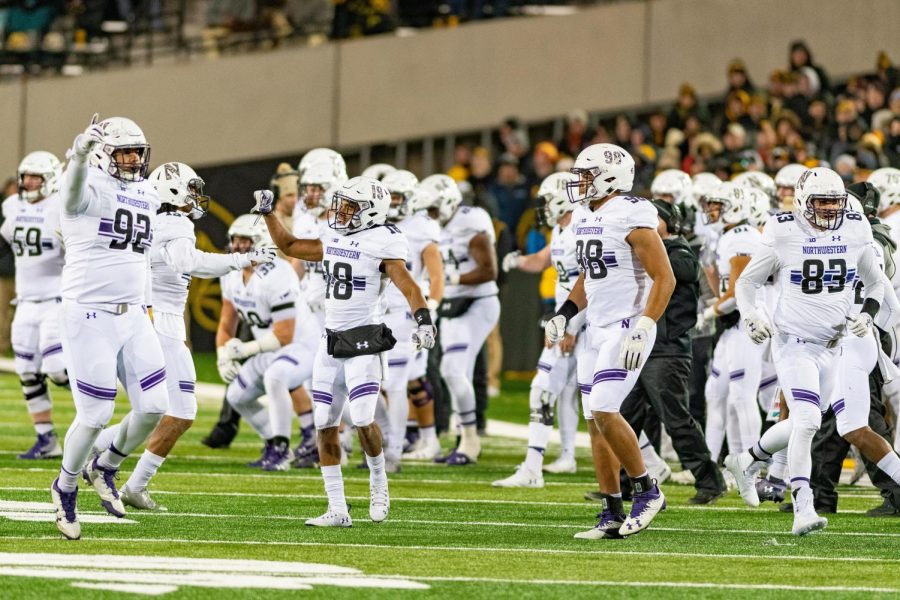 Northwestern players celebrate after a touchdown. The Wildcats clinched the Big Ten West with a win against Iowa.

IOWA CITY, Iowa — Pat Fitzgerald has been saying it for years.

In April 2017, upon receiving a contract extension through the 2026 season: “You come here and you win and you compete for championships.”

When Northwestern entered the AP Top 25 after taking down then-No. 21 Stanford to open the 2015 season: “Quite frankly, I expect to be ranked,” Fitzgerald said. “I expect our team to compete for championships.”

Now, after a 14-10 victory over No. 21 Iowa and a few other favorable results on Saturday, he’s got one. Northwestern (6-4, 6-1 Big Ten) has won the Big Ten West and will take on either Michigan or Ohio State in its first-ever appearance in the Big Ten Championship game.

“I’m just so proud of (the team). I’m really proud of them, I’m proud of the staff. We’ve been together for a long time, especially the seniors. Our fourth- and fifth-year guys have won a lot of big games. They’ve been through a bunch of tough defeats,” Fitzgerald said. “There was just something about this brotherhood that makes it such a joy and a privilege to be around every day.”

It wasn’t an easy task Saturday. Iowa led for most of the game before senior quarterback Clayton Thorson connected with junior receiver Bennett Skowronek on a 32-yard touchdown pass in the fourth quarter.

It wasn’t an easy task in 2018. The same Wildcats that opened 1-3 with an embarrassing home loss to Akron (now 4-5 in the MAC) are now winners of five of their last six, including this program-defining victory.

“This team has overcome a ton of adversity,” Fitzgerald said. “And then we got beat up… The brotherhood that’s in that locker room is the glue that has kept everything together. If that’s one thing that I would say about this group, the brotherhood is special.”

NU will now have a chance to do something it hasn’t done since 2000: win the Big Ten. The win at Kinnick Stadium on Saturday, combined with Penn State’s defeat of Wisconsin and Purdue’s blowout loss at Minnesota, guaranteed the Cats the Big Ten West title. Fitzgerald’s squad is now 13-1 in its last 14 conference games, with its only loss coming by three points to now-No.4 Michigan.

The Cats have had success in the 18 years since their last conference championship — three 10-win seasons, 10 bowl appearances — but none of those teams played in a conference title game.

“There’s so many guys who have come before us that have laid the foundation, but this team has really come together after starting 1-3,” Thorson said. “I’m just so proud to be a part of this team, and we’re going to get it done these next two weeks.”

Thorson didn’t have his best game Saturday, completing only 50 percent of his passes for 122 yards and tossing two interceptions. Freshman running back Isaiah Bowser carried most of the load, piling up 165 yards on 31 carries and adding 33 more on three receptions.

NU’s defense, however, was the star of the show. Against future NFL quarterback Nate Stanley, NU allowed only 10 points and forced two crucial turnovers, the most important coming on a forced fumble by junior defensive lineman Joe Gaziano with less than two minutes remaining. The Hawkeyes wouldn’t touch the ball again.

“This is unbelievable feeling,” Gaziano said. “This is the goal that we set at the beginning of every year, and for it to be able to come true — that we won the West and are going to Indianapolis — it’s amazing to see all the hard work these guys have put in… For it to pay off and for us to go to Indianapolis is a great feeling, but we’re not done yet.”