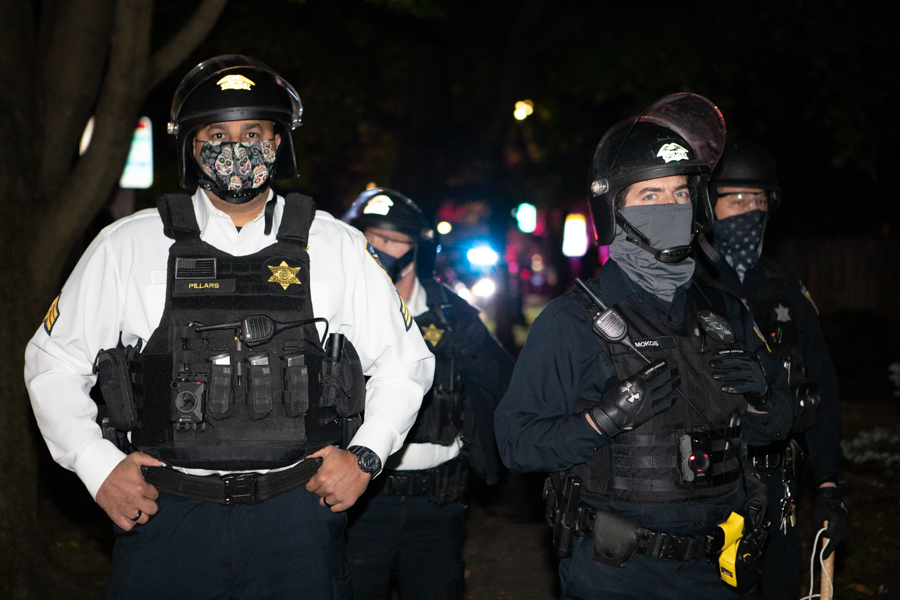 Police stand outside President Schapiro’s house during an NU Community Not Cops protest. Schapiro’s comments about recent protests sparked a campus-wide debate about anti-Semitism and abolition.

How conversations about anti-Semitism divided a campus

Beyond the absolute denunciation of student protesters led by NU Community Not Cops — a disapproval that made it clear those who “violate rules and laws” will be held accountable — one particular paragraph caught the attention of community members across backgrounds.

“Many gathered outside my home this weekend into the early hours of the morning, chanting ‘f— you Morty’ and ‘piggy Morty,’” Schapiro wrote Monday afternoon. “The latter comes dangerously close to a longstanding trope against observant Jews like myself. Whether it was done out of ignorance or out of anti-Semitism, it is completely unacceptable.”

Soon, a longtime division had reappeared (virtually) on Northwestern’s campus: Jewish community members and protesters aligned with NUCNC, some of whom overlap in identities, entered an online debate about the roles of anti-Semitism, Zionism, abolition and racism — leaving many frustrated and hurt by fellow students’ words.

In their letter, written and published within hours of the president’s initial email, NUCNC members wrote that while they were using the common slang term “pig” to refer to Schapiro’s alliance with UP officers, the organization apologized to Jewish community members associated and not associated with their campaign.

“However, we do not apologize to Morton Schapiro,” they added. “False claims of anti-Semitism have been used throughout Northwestern’s history to shut down student activists, especially Palestinian activists, and to divide coalitions by falsely claiming that anti-Zionism is anti-Semitism. Because of the pervasive myths of colonialism and white supremacy, we find ourselves having to repeat: anti-Zionism is not anti-Semitism.”

They added that members of the organization envisioned “a world without state-sanctioned violence: from Evanston to Lagos to Bethlehem.” Ultimately, writers called on Schapiro to resign as president.

In a statement posted Wednesday, Wildcats for Israel said while there are nuances in distinguishing anti-Semitism and anti-Zionism, they often “manifest together.”

“When anti-Zionism is invoked in an attempt to avoid an unequivocal condemnation of anti-Semitism, the line between the two has been crossed,” the group’s executive board wrote. “Without solicitation, (NU Community Not Cops) decided to inject matters well beyond the scope of the conversation, including mentions of Zionism and Palestinian Liberation.”

For Weinberg sophomore AJ Rosenthal, a member of the group’s executive board, the line between anti-Semitism and anti-Zionism is crossed when Israel is referenced only with regards to Judaism.

Rosenthal said the definition of Zionism to many people, himself included, is the right to Jewish self-determination. If someone is anti-Zionist, they are against that right to self-determination — a position he said isn’t inherently anti-Semitic in itself.

For campus abolitionists, however, discussing both concepts were natural progressions in the conversations about abolishing the police and standing in solidarity with global liberation movements.

In a Wednesday letter to the editor to The Daily, over 90 Jewish community members condemned Schapiro’s “weaponization” of his Jewish identity and “spurious, willfully ignorant accusations of antisemitism.”

“We refuse to let debates over Israel-Palestine derail the necessary work of student organizers demanding the abolition of NUPD,” the letter stated. “While our Jewish community may hold a variety of opinions on the nature and future of Zionism, we reiterate that criticism of Israel, condemnation of the brutal Israeli occupation, as well as rejection of Zionism… are not antisemitic.”

A question of continued support

Outside of organizational responses and letters, many Jewish and non-Jewish students alike have been struggling with the implications of the discussions on intracampus relations.

SESP senior Liz Curtis said students who have passed over the plight of Black and brown students, who haven’t been safe on campus since the University was founded, are engaging in White centrism. Schapiro’s email was skewed to ignore the fact that he hasn’t directly responded to or engaged with protesters for several months, they added.

“(Schapiro) keeps saying that there was violence when there has been no violence — like, spray paint is not violent,” Curtis said. “He’s using this inflammatory language to make people feel like they’re not safe… and it really is just showing the White privilege that is wrapped up within this debate.”

Jess Schwalb (Weinberg ’19) studied the history of anti-Semitism and racism claims dividing communities in the civil rights movement during her time at NU. Beyond erasing the existence of Jewish students of color, the former Daily staffer said these narrower conversations reflect issues of White privilege as well.

While anti-Semitism is on the rise in the country, Schwalb said the fears of White Jewish people have historically been weaponized against organizers of color, leading to conditional support of Black and brown communities.

Medill junior Ben Moskow, a supporter of NUCNC’s demands, said disagreeing with one part of the group’s broader platform is not grounds to withdraw support from police abolition.

“If you were in favor of abolishing the police, if you wanted to do that because it was going to keep Black students safe, that is still the goal of the movement,” Moskow said. “If you’re receding now… it doesn’t seem like you were very committed to it in the first place.”

One senior, who asked to remain anonymous, said she felt a similar conflict to other Jewish students who hesitated to support NUCNC after the organization’s response. As a Korean American and Jewish woman, she said she has faced discrimination on multiple fronts before and has become frustrated by the lack of group solidarity in the past week.

Though she had gone to protests, she wasn’t sure if she wanted to show up to actions anymore. She said the dialogue had become anti-Semitic at that point and she felt targeted for her identity as organizers read their response out loud.

“As a person who does support abolition, I then felt somewhat excluded from the movement because of my Jewish identity,” the senior said. “It went from a place where I felt welcome to, all of a sudden, feeling like I shouldn’t be there, and I was not wanted there because I identify as a Jewish person.”

Despite her discomfort, the student added that she has thought about how her experiences, while important, did not compare to the violence her Black peers faced every day.

Finding some community through Hillel

When it became clear Jewish students were impassioned and divided on these issues, Northwestern Hillel’s campus rabbi Jessica Lott, said the organization decided to hold processing sessions over Zoom on Tuesday evening and Wednesday afternoon.

“There was real disagreement within the Jewish community about how to understand what was going on,” Lott said. “But what seemed universal was there was a lot of pain and upset and the need for a space to come together and listen and be heard.”

As campus rabbi, Lott said it is her job to support students when they need it, regardless of why they are in need. Twenty-eight students attended the sessions, which she said sought to make space for Jewish students to examine their thoughts and feelings and hear how other students thought and felt.

Lott said many people have tried to portray the Jewish community as a monolith, but that it is actually quite diverse in political, religious and racial terms.

“Hillel is a pluralistic Jewish organization that tries to be for every Jewish student, wherever they are on their journey of figuring out what they think and feel about being a Jewish adult in the world,” Lott said.

However, Hillel has its own limitations as an international organization: their website guidelines state that they will not partner with any organization that, among other criteria, “delegitimize, demonize, or apply a double standard to Israel,” or “support boycott of, divestment from, or sanctions against the State of Israel.”

In other words, conversations that involve anti-Zionist organizations cannot be co-sponsored by NU’s Hillel chapter itself, although members and staff are free to independently participate in such discussions — and have in the past.

Schwalb said she had felt some tensions concerning Hillel’s limitations when she helped plan the most recent 2019 Freedom Seder after a five-year hiatus — an event rooted in the civil rights era that brought together Black, Jewish and Palestinian students and allies at NU to discuss important issues over dinner.

“(Hillel is) the most visible, most institutionalized face of Jewish life on campus,” Schwalb said of those tensions. “One of my big takeaways… was these kinds of conversations are really powerful when they’re led by students who don’t have to be constrained by certain organizational limitations. I’m really curious to see how Hillel and other organizations on campus show up in this moment in particular, given that history of opting out when these conversations are happening.”

Since the release of his initial email, Schapiro has since said he would not take back a single word, which has since been denounced by multiple departments and programs. He also said the individuals and groups that have critiqued his letter didn’t understand what he meant or have mischaracterized it.

This means campus conversations about the larger topics of anti-Semitism and abolition will likely have to be led by students themselves.

Though Schwalb graduated last year, she said she has yearned to connect with people of different backgrounds this week — similar to the sense of community facilitated by the Freedom Seder. Schwalb said last year’s event was powerful because of the diverse group of people who conversed about meaningful coalition and solidarity.

Despite the obstacles presented by COVID-19, she said she is still optimistic about the opportunity for deeper conversations down the line. The question is about leadership, she added.

“Is it going to be students — particularly White students, particularly Jewish students — continuing to show up at any Community Not Cops events and trying to engage in that space?” Schwalb said. “Is it going to be Jewish organizations on campus, which historically have not led the way in these conversations? I know it’s not easy, but it feels like a very possible moment to do that.”

Curtis said while they also don’t know what the future looks like, they envision students coming together as a community to fight oppression on campus — and realizing NUCNC’s movement doesn’t just affect Black people.

“I hope people are able to realize that even if they’re benefitting from privilege systems now, if you hold any sort of marginalized identity — once you’re able to help Black and brown students get what they need, and be able to not be stepped on and crushed by administration, they won’t be able to do that to any of us,” Curtis said.