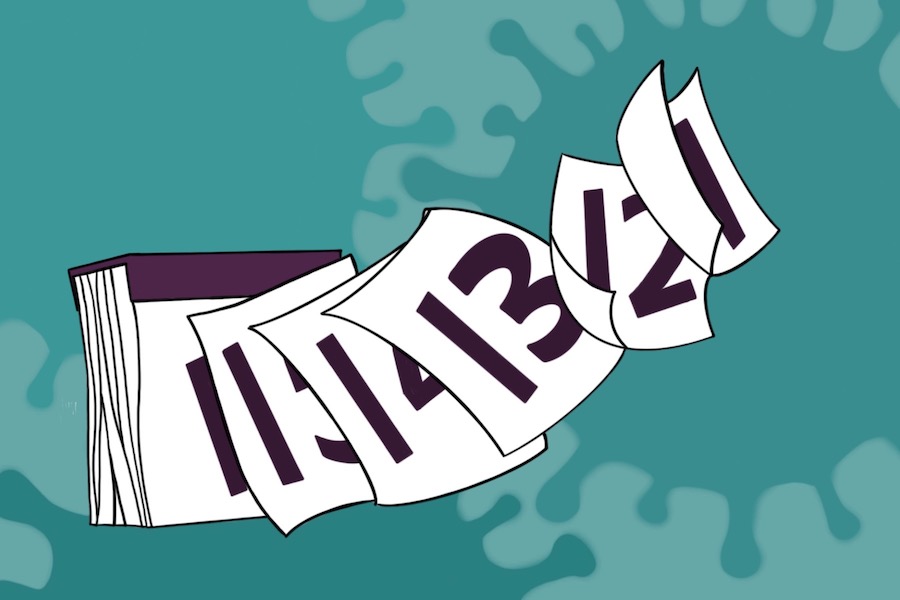 Students say the problem is not about the University’s testing capacity, but rather, its inability to effectively communicate to students

Curtis DeBisschop only found out he tested positive for COVID-19 through the city of Evanston’s online portal.

The SESP senior got tested at the Donald P. Jacobs Center on Northwestern’s Evanston campus, where asymptomatic upperclassmen living off-campus are expected to test weekly.

DeBisschop was told he would get a call from NU if he tested positive, but instead heard first from a contract tracer employed by the city. His roommates weren’t called by the city’s contact tracers until four days after he received the positive result.

Eight days later, DeBisschop received an email from NU informing him to start isolating, but the email was sent on the day his isolation period was, according to the email, supposed to be over. The email also contained instructions that conflicted with the University policy stating that NU community members who test positive need to self-isolate for 10 days after receiving their test.

“After I’ve experienced all this, I understand how disorganized Northwestern is and how fragile everything they’re doing for testing is,” DeBisschop said.

According to the University’s COVID-19 and Campus Updates website, contact tracing involves identifying members of the community who have come into close contact with someone known to be COVID-19 positive.

When a positive case is detected, the website says individuals are contacted by a member of the contact tracing team but does not specify when that occurs. A contact tracer is supposed to reach out to all identified members of the NU community who the positive case has been in close contact with over the last two weeks, according to the website.

If someone identified as a close contact develops symptoms or becomes COVID-19 positive, the contact tracers are to identify that person’s close contacts as well, the website says.

Communication junior Max Johnson said he and his five roommates did not receive timely contact tracing alerts. Even though Johnson and his roommates were all tested Sept. 9, his fifth roommate’s results were much more delayed. When that roommate contacted the University himself, he found out he tested positive.

After this, Johnson said he expected to be contacted sooner, but he did not receive a contact tracing call until after over a week. He additionally received a University contact tracing email eleven days after his initial testing date. But the email stated facts he already knew.

“It said, ‘Hey, we think that you’re living with someone who has contracted COVID,’” Johnson said. “And it’s like, ‘Yeah, we’ve been living in this situation for two weeks now.’ And so that was just a little disconcerting.”

Because Johnson’s roommate’s results as well as contact tracing notifications were delayed, the members of the household had to conduct contact tracing on their own, he said.

A graduate student, who chose to remain anonymous, was emailed by NU’s COVID Case Management team and told to start self-isolation over a week after he tested positive. He said he received no instructions from NU for three days after testing positive, even after trying to contact officials himself via email and phone.

Even after the graduate student was contacted three days after testing positive, he said he was only asked by the team about people he had been in contact with the day after. He had to personally conduct his own contact tracing, he said, which “should not be (his) job.”

The graduate student said the experience felt like the University was placing people at serious risk, especially given that others may not be responsible enough to do their own contact tracing. He added that the contact tracing process is meant to be anonymous, so the fact that he had to inform anyone he had been in contact with that he tested positive was a breach of confidentiality.

“The entire time that I was self-isolating, I was building my anger about this operation,” the graduate student said. “It felt like they were taking their time.”

Underclassmen are left behind

One sophomore, who chose to stay anonymous, said she learned her friend tested positive for COVID-19 only because her friend directly reached out about her results.

NU’s contact tracing team knew they were in close contact, but the sophomore and other friends who interacted with the COVID-positive friend have yet to hear from the University.

“It defeats the whole purpose of contact tracing,” the sophomore said. “(It’s a) good thing my friend took the responsibility to contact people herself, but that should be part of the University’s responsibility.”

In a Friday email, the University announced plans to expand COVID-19 testing to underclassmen in Evanston — despite previous communication discouraging first- and second-years from moving to the area. NU wrote it is working to determine when and how frequently it can make asymptomatic testing available to underclassmen.

However, students say the problem is not about the University’s testing capacity, but rather, its inability to effectively communicate to students — regardless of year — whether they have been exposed.

The lack of definitive and time-efficient contact tracing can have particularly adverse consequences for underclassmen, who are not allowed to live on campus. In cases like that of the sophomore who doesn’t live in Evanston but can visit friends who live off-campus, the chances of disseminating the virus can be much higher, especially if they received delayed contact tracing warnings — or none at all.

Johnson said he is worried about the consequences of an ineffective contact tracing system, come Winter Quarter, when underclassmen would be allowed on campus. Northwestern has had enough time to come up with a comprehensive plan, he said.

“If this is the same sort of setup they would have had in place and they were bringing an extra 4,000 students to campus, how do they think they’re going to manage that?” Johnson said. “I would have thought that the system of contact tracing and contact would be a little bit more robust.”

A previous version of this article misstated how the city of Evanston contacted Curtis DeBisschop about his test results. The Daily regrets the error.