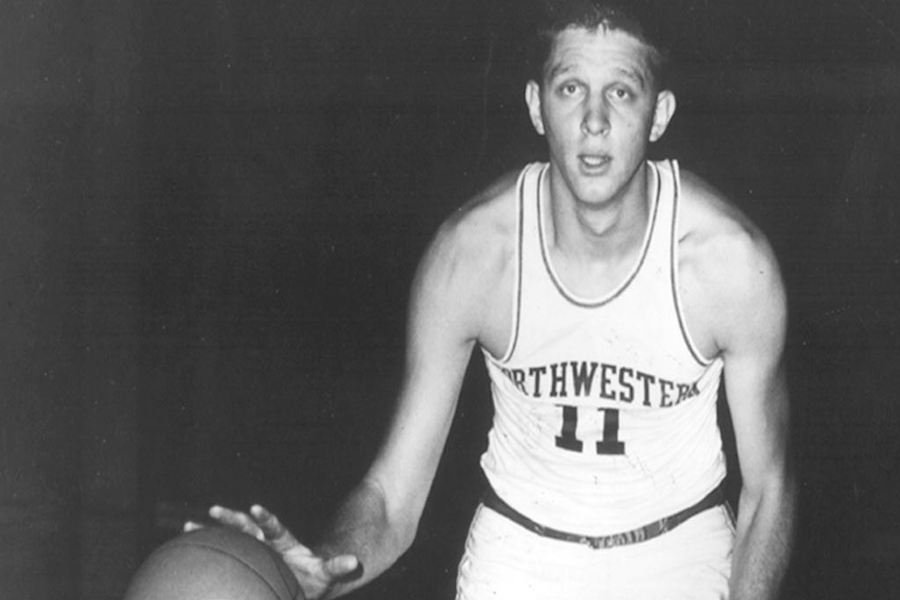 Joe Ruklick. The former NU basketball player died on Sept. 16 at the age of 82. (Courtesy of Northwestern Athletics)

Joe Ruklick. The former NU basketball player died on Sept. 16 at the age of 82.

The first time former Chicago Tribune sportswriter Neil Milbert heard of Joe Ruklick was on television in the 1950s.

A high school student in Northeast Iowa at the time, Milbert watched Ruklick play in the semifinals of the Illinois state tournament, and the Princeton, Ill. native stood out.

“I just followed his career,” Milbert said. “I was impressed by how well he played.”

Ruklick — a 6-foot-10 All-American center from Northwestern best known for assisting on the shot that gave NBA Hall of Famer Wilt Chamberlain 100 points in one game — died Sept. 17 of natural causes. He was 82.

Ruklick entered Northwestern in 1955 and played three seasons for the Wildcats, averaging 23 points and 13 rebounds in his All-American senior season. He left NU in 1959 having broken 16 team records.

Following a three-year NBA career with the Philadelphia Warriors, Ruklick spent time as an investment counselor, teacher and journalist and became a member of the N Club — a society for former Wildcat athletes.

Milbert, who met Ruklick at the N Club, said that the former NBA athlete was passionate about matters of social justice throughout his life, which stemmed from the prejudice against Black players he saw in the NBA.

“He really felt strongly that Black people in this country growing up at the time Joe and I did had gotten shortchanged,” Milbert said. “He felt that as time went on, it was more than time for society to do something.”

Ruklick joined the Warriors in 1959 after getting drafted 9th overall and averaged 3.5 points and 2.5 rebounds during his three-year NBA career. His assist to Chamberlain came during his final season.

In the fourth quarter of the Warriors’ March 2 matchup against the New York Knicks in 1962, Warriors coach Frank McGuire put Ruklick in the game. With under a minute left, Chamberlain had 98 points. Ruklick got the ball as a few Knicks guarded Chamberlain, and once Chamberlain got open, Ruklick threw him the ball for the history-making basket.

Chamberlain said at the time that he asked McGuire to put Ruklick in the game because he thought some of his White teammates may not want him, a Black man, to reach the success of 100 points, the Northwestern Magazine wrote.

Ruklick and Chamberlain became good friends while on the Warriors, though they’d crossed paths in college as opponents. Chamberlain’s sister, Barbara Lewis said they stayed in touch long after they were teammates.

“They ended up being the best of friends,” Lewis said. “I mean, they just had a great time together.”

Lewis added that her brother invited Ruklick to Kansas for his jersey retirement ceremony in 1998. Lewis also became friends with Ruklick, and they communicated through letters for many years.

Staying involved with the Wildcats

At age 50, Ruklick returned to NU to receive his master’s degree in journalism, which he earned in 1990. After graduating, he had stints at newspapers including the Chicago Defender and the Register-Mail in Galesburg, Ill. and covered NU sports for the Aurora Voice.

But Ruklick was careful to keep his writing about NU as objective as possible, despite having a personal connection to the school.

Teddy Greenstein (Medill ‘94), a sports reporter at the Chicago Tribune, recalled a moment when Ruklick covered a game between the Cats and Illinois. Bill Carmody, a former men’s basketball coach, offered Ruklick a ride back to the hotel where his car was parked, but Ruklick said no and walked back in the cold.

“Joe had tremendous integrity,” Greenstein said in an email to The Daily. “He did not want to be viewed as a hanger-on.”

In the early 2000s, while renewing his membership for the N Club, Ruklick encountered Assistant Director of Graduate Programs Amy Danzer, who at the time worked in the men’s basketball program while pursuing a master’s degree in literature. The two bonded over their shared interest in reading and remained friends for decades.

“My first impression of him was just that he was a rare dude,” Danzer said. “It’s not every day that you meet an athlete who wants to talk about the Shakespeare authorship question.”

Danzer added that Ruklick was a great storyteller, who would invite members of the press, basketball players from out of town and friends over to his house — which was located across the street from Ryan Field and Welsh-Ryan Arena — for dinner parties ahead of NU games.

The conversation there was always “rich,” Danzer said, and she enjoyed hearing Ruklick’s stories about his years at NU, his time with the Warriors during the 1960s and his travels around the world.

“He had an incredible sense of adventure,” Danzer said. “He lived a full life.”