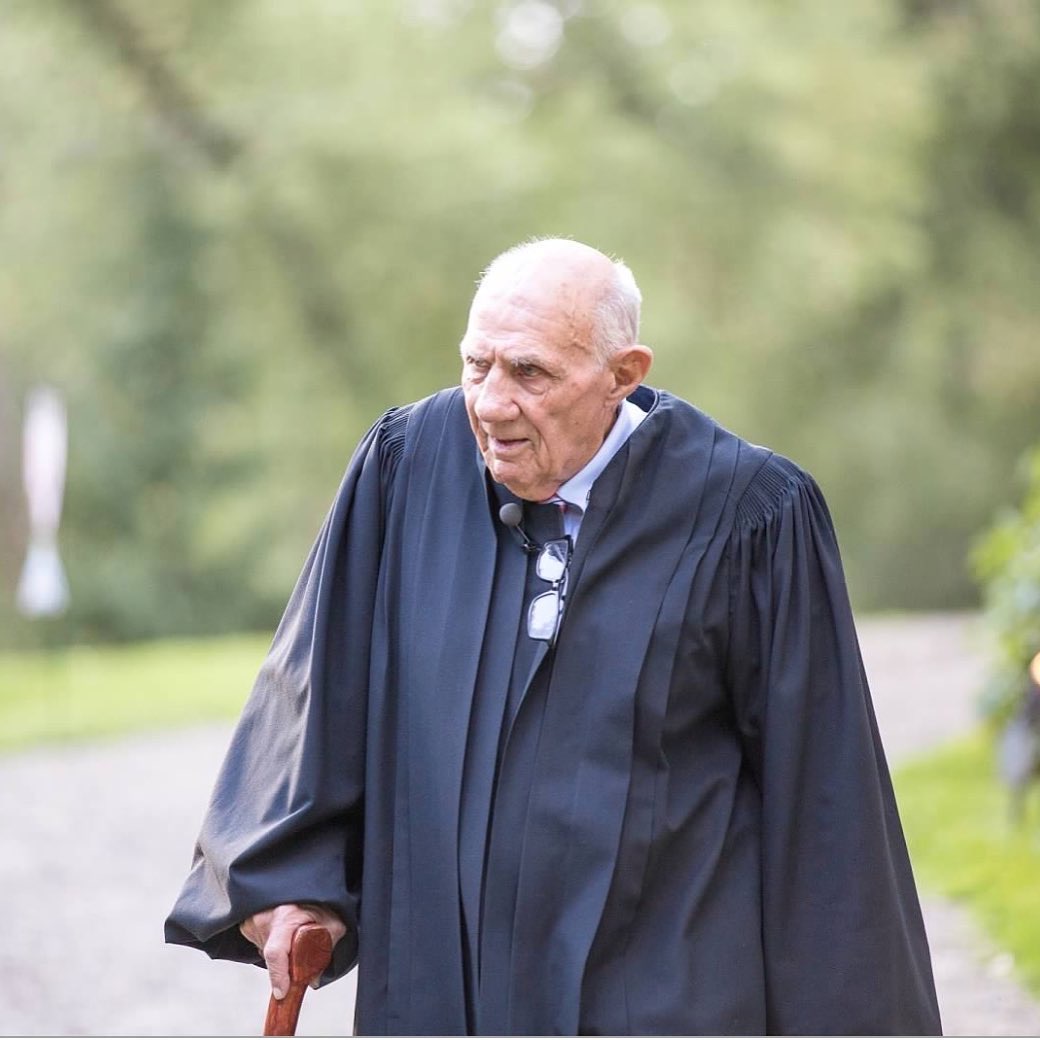 Gaspar Perricone. After playing a key role on Northwestern’s 1949 Rose Bowl-winning team, Perricone became a highly respected lawyer and judge in his home state of Colorado.

Gaspar Perricone played on one of the most accomplished teams in Northwestern history — the 1949 Rose Bowl team. The Wildcats went 8-2, won the only Rose Bowl in school history, had 17 players selected in the NFL Draft and were led by decorated veterans of World War II.

Among his teammates, Perricone stood out due to his work ethic, respect for others and kindness.

“We would admire him because he was a hard worker,” Rudy Cernoch, NU’s starting right tackle in the 1949 Rose Bowl, told The Daily. “There was something about Gaspar…he seemed to be an extra fine person.”

Perricone, a key member of that 1949 Rose Bowl team before becoming a well-regarded judge and college football official, died May 21 in Colorado at the age of 91. His son Roger told The Daily he died of COVID-19, a week after being diagnosed.

Throughout his life, Perricone continued to instill his work ethic and respect in everything he did, earning the respect and admiration of friends, teammates and colleagues across the country.

“He was a man who never let his job, or his status or title get in the way of being a human being,” said Christopher J. Munch, who served as a judge in the same court as Perricone. “It was an honor to know the man.”

“He deserves a lot more credit”

Born in Pueblo, Colorado on Nov. 30, 1928, Perricone grew up wrestling and playing football, and continued on the gridiron when he entered Northwestern in 1946.

Perricone was a tough, bulldozing fullback and speedy runner in coach Bob Voigts’ T-formation offense. But during his sophomore and junior seasons, he was behind All-American and 1948 Chicago Tribune Silver Football award winner Art Murakowski on the depth chart. While he wasn’t getting the reps Murakowski received, halfback Ed Tunnicliff said Perricone stood out when he got the chance.

“When he came in the ballgame,” Tunnicliff told The Daily, “you didn’t lose much, if any.”

Tunnicliff recalled a play in the 1948 season opener against UCLA in Los Angeles as an example. With the ball at midfield in the third quarter, Perricone received a pitch to the right from quarterback Don Burson and found himself with space to run. After about 10 yards, he caught a defender flat-footed and Perricone sped past him. After that, he put on the jets and evaded multiple defenders on his way to the end zone.

While that might have been Perricone’s most electric play, his most important one came in the biggest game of his career. Murakowski got hurt in the middle of the Rose Bowl, so Perricone stepped into the lead fullback role.

On the final NU drive of the game — down 14-13 and needing 88 yards to reach the end zone — Perricone was a key factor in moving the chains. Tunnicliff estimated that Perricone gained about 35 yards on the drive, including one big run that brought the ball to midfield. A few plays after that, the Cats faced a 4th-and-1 just inside Cal territory.

“If we didn’t get a first down on that fourth down play, the game was over as far as we were concerned,” Tunnicliff said. “Burson called Perricone’s number off tackle to the left and Gaspar got two yards. We needed one, but he got two.”

Two plays later, the Cats called one of the most famous and well-run plays in program history — the direct snap to Tunnicliff, who dashed 43 yards for the game-winning score.

“The fact that the team won was more important than any individual efforts that he might have made during that game,” Roger Perricone said. “Again, that’s just the way he was. It wasn’t all about him, it was all about the team and the University that mattered most to him.”

During the 1949 season, Perricone finally got his chance to be a starter. He thrived in the role, finishing third in the conference in rushing and was named one of Northwestern’s team co-MVPs. Perricone participated in a College All-Star Game on New Year’s Eve, and was called the “ball-carrying star” of his team by the Associated Press.

The student body later voted him Northwestern’s Athlete of the Year in a poll sponsored by The Daily.

“He deserves a lot more credit than he ever got at Northwestern,” halfback Frank Aschenbrenner said in a 2006 Northwestern magazine story.

“Gaspar was a fabulous judge”

After graduating with a degree in geology, Perricone was drafted into the U.S. Army. After his service ended, he returned to Colorado and went to law school at the University of Denver. He earned his degree in 1956 and began his law career.

Roger said Perricone started off working in general law before spending a lot of his time on water law. He said his father was one of the few lawyers who dealt with cases all across the state of Colorado regarding water law at the time.

In 1979, Perricone was nominated and appointed to become a judge on the court of Colorado’s First Judicial District. He spent 18 years on the district’s bench, and later would become the chief judge of the court. As chief judge, he oversaw the construction and completion of a new Jefferson County courthouse, which Munch said became a model for courthouses in Colorado.

Munch said he learned a lot from Perricone — whom he considered a mentor — including lessons on how to conduct a courtroom and showing respect to everyone in the courthouse.

“Gaspar was a fabulous judge,” Munch said. “He was impartial. He was honest. He was very, very bright.”

Perricone’s biggest case came in 1997. He had just retired from the First Judicial District, but federal judge Richard Matsch asked him to help with the Oklahoma City bombing trial. Matsch was overseeing the trial, which was held in Denver. However, a number of people in Oklahoma City who were involved in the case wanted to be a part of the proceedings but weren’t able to go to Denver for the length of the trial.

So an auxiliary trial courtroom with a closed-circuit transmission of the trial was set up in Oklahoma City, and Perricone was asked to run it. Despite not getting paid to do it, he accepted, and relocated there for nine months with his wife.

Charlie Younger survived the bombing and was in the auxiliary courtroom throughout the trial. Younger said Perricone was always pleasant to be around and went through “a lot of trouble” to make sure everyone in the courtroom understood what was happening.

“He was very considerate of all of the people that were involved in the bombing that were there,” Younger told The Daily. “He could not talk to us individually, that was against the rules. But… he would come over and ask how everyone was doing every day while the trial was going. That just stood out big in my mind.”

Roger said his father “grew a fond attachment” to the people from Oklahoma City, and ended up staying in touch and becoming friends with a few of them, including Younger.

After the case, Perricone continued to serve as a senior judge in Colorado, a position where retired judges help out local courts with work and cases.

“A special part of his life”

Perricone was drafted in the sixth round by the Chicago Bears in the 1950 NFL Draft, but never went to camp due to his military duties. But his career in athletics was not over.

He played semi-pro football briefly in the 1950s, and while serving as a lawyer and a judge, Perricone was a football referee. He started out officiating high school football in Colorado before becoming a college football official for 28 years, including two decades with the Big 8 Conference.

“He officiated the Orange Bowl, and the Cotton Bowl, and the Sugar Bowl and the Independence Bowl — I’m sure I’m forgetting some,” Roger Perricone said. “It was a special part of his life and something he was really proud of.”

The only major bowl game Perricone did not referee in was, ironically, the Rose Bowl. Even after he stopped refereeing games, the NCAA asked him to sit in a box and evaluate the officials on the field.

“Some of the skills of being a really, really good sports official carried over to his being a judge,” Munch said.

Roger said his father also officiated high school lacrosse games in Colorado after the sport started growing in the state and was involved in many other sporting organizations and groups in Colorado.

Perricone leaves behind his wife, Carol, whom he met at Northwestern, his sister Vita Marker, children Roger Perricone and Nancy Berenato, four grandchildren and four great-grandchildren.

Roger said Perricone believed in “right and wrong, and doing what you said you would do,” and that those platitudes defined his life. And it was his time in Evanston that helped propel him on his path.

“His career at Northwestern was really important to him,” Roger said. “It set what and who he was, and lived with that through his life. Those lessons he learned on the football field at Northwestern were invaluable to him.”