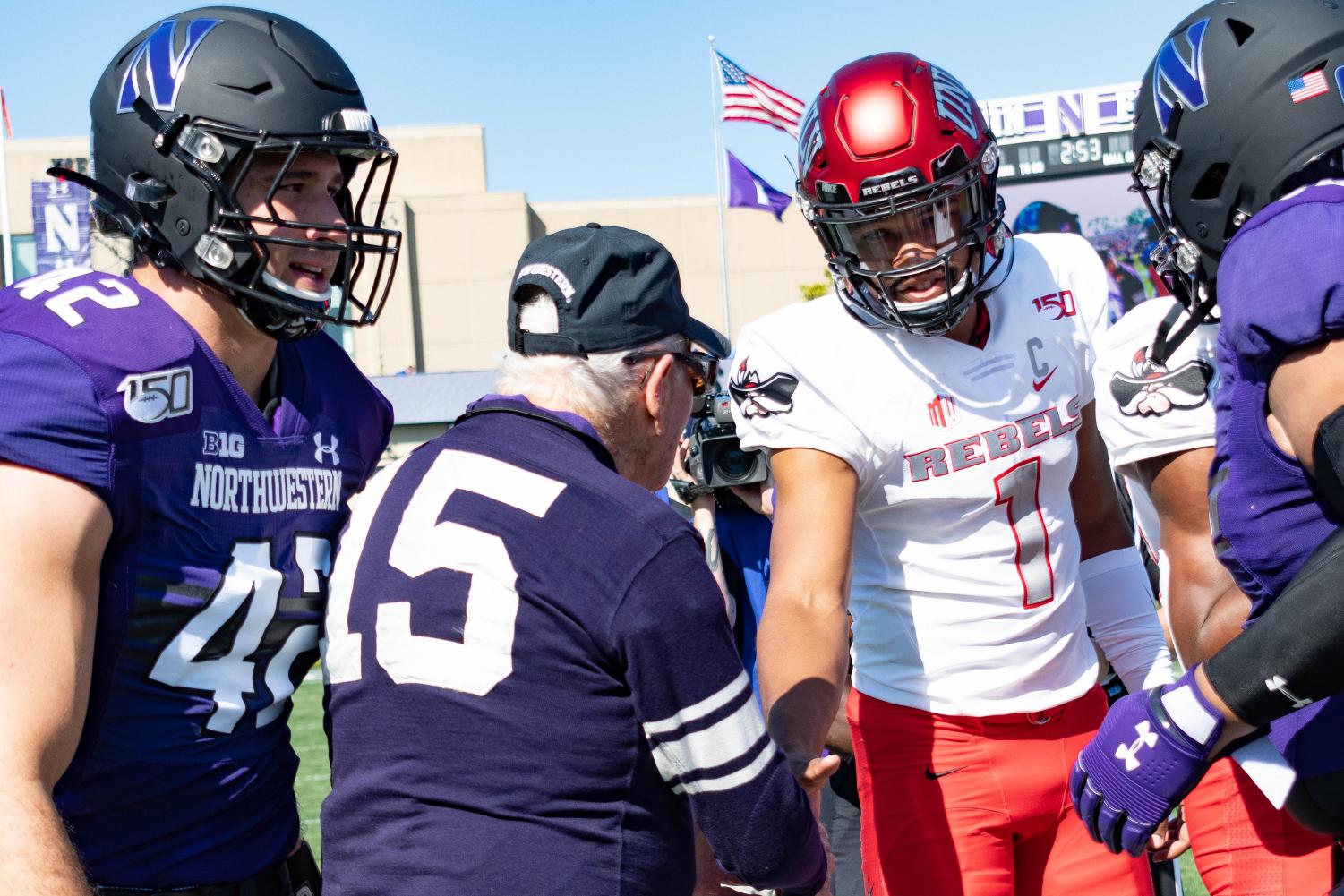 Ed Tunnicliff shakes the hand of UNLV captain Armani Rogers. Tunnicliff is wearing the same jersey he wore in the 1949 Rose Bowl.

Before every football game, the four Northwestern football captains link arms and strut out to midfield for the opening coin toss. A few minutes before kick Saturday, Paddy Fisher, Bennett Skowronek, Jared Thomas and Trae Williams met on the west sideline and began their walk.

Joining them was Ed Tunnicliff, who, for the past 70 years, has been an NU legend.

After fighting in World War II and being decorated with a Purple Heart, Tunnicliff was a two-year starter at right halfback for the Cats at the end of the 1940s. Once described by The Chicago Tribune as 155 pounds of “offensive dynamite,” Tunnicliff ran his way into the history books with a game-winning, 43-yard touchdown run in the 1949 Rose Bowl — a 20-14 win over California.

As the University honored the 1949 Rose Bowl team this past weekend, he was back at Ryan Field as the team’s honorary captain. Tunnicliff was one of five players from that team able to make it to Evanston for the game.

“You could tell that they were very thankful for the opportunity to come back and be recognized,” senior defensive end Joe Gaziano said. “It’s a cool moment for both the older generations and us as players.”

Northwestern has two No. 15’s on its roster — sophomore quarterback Hunter Johnson and freshman kicker Trey Finison. But Saturday, there was a third player in a purple No. 15 jersey.

It had been 25,800 days since he wore his purple, long-sleeve No. 15 Northwestern jersey in the Rose Bowl. But, as he walked out to shake the UNLV captains’ hands, Tunnicliff was wearing it, and it was still in pristine condition.

He may not have played a down of football for the Cats since the first half of the 20th century, but Tunnicliff could still fit in his jersey.

Don Burson, the quarterback in the 1949 Rose Bowl, called it the perfect play.

With time winding down in the fourth quarter and NU down by one point to the Golden Bears, the Cats decided to run a trick play — a direct snap to Tunnicliff, while Burson faked a pitch on the other side of the field. They had never run it in a game, and had not even practiced it in weeks.

The play worked to perfection.

Set up in coach Bob Voigt’s favored T formation, left halfback Frank Aschenbrenner went in motion towards the right side of the field. On the snap, Burson faked a pitch to fullback Gasper Perricone and Tunncliff followed Aschenbrenner, who made an early block to give Tunnicliff some space. Richie Anderson, Bill Forman and Ed Nemeth paved the way with key blocks of their own to let Tunnicliff sprint and swerve down the sideline. Finally, around the five-yard line, a Cal defender managed to grab a hold of Tunnicliff, but the 5-foot-11 runner had too much momentum. Tunnicliff fell into the endzone for the score.

One newspaper called it a “brilliant display of speed and cunning,” another said it was a “sensational 43-yard touchdown gallop.”

When Tunnicliff talks about that game, which is the only Rose Bowl NU has ever won, there’s a twinkle in his eyes. He does not know how many times he has seen the play — one of the most monumental in the history of the program — but it is in the hundreds. Yet, when he watches it, he does not watch himself become a legend.

“Most people like to watch the ball and wherever it’s at. I enjoy watching what all the other guys are doing,” Tunnicliff said. “It was amazing how well that play was run.”

Before Tunnicliff was honored on the field Saturday, he sat on the sidelines of Ryan Fieldhouse on Friday, chatting with director of player development and football relations Jacob Schmidt. It was the Cats walkthrough, and there wasn’t too much action going on the practice field.

Tunnicliff, now 93, was wearing a grayish-navy polo with an American flag on the left breast pocket, tucked into his khaki pants. His brown belt matched both the strap of his watch and his loafers. Inside one of his pant pockets is the letter he received from Pat Fitzgerald — signed “Go Cats” — inviting him to the game.

Schmidt said the team will finish practice in a few minutes, and they should move closer to midfield because Fitzgerald will huddle the team there before Tunnicliff gives his honorary captain speech. Schmidt added he’ll bring the chair over, and Tunnicliff can sit in it for his speech.

No, Tunnicliff said he does not need a chair for the speech. The legend will address the team standing.

Even though he is in his 90s, there’s still a pep in his step. And while he said he could run 43 yards for a touchdown 70 years ago but can’t walk 43 yards today, Tunnicliff still moves well.

A lot has changed in the 70 years since Tunnicliff was a student in Evanston, and he said it was a real pleasure to see the new facilities. He’s amazed he is even able to be there for the weekend. When asked what it was like to be on campus, Tunnicliff got emotional discussing how welcoming the coaching staff has been.

“They have a major job of getting these teams ready to play football,” Tunnicliff said. “And they would take time away from their busy schedule to take care and entertain and honor five guys that can never do anything to help them. I doubt very much if you could find another coach in the Big Ten or the other five Power Conferences that would do that.”

The 43-yard sprint for six at the end of the 1949 Rose Bowl wasn’t the only big play of Tunnicliff’s career.

Earlier in the game, Aschenbrenner opened the scoring with a magnificent 73-yard touchdown run, the longest in Rose Bowl history at the time. And on the play, Tunnicliff had a key block that allowed his fellow halfback to put his name in the record book.

The next October, NU upset Michigan, which entered the game on a 15-game conference winning streak, 21-20 at Dyche Stadium. For one of the Cats touchdowns, Burson hit Tunnicliff with a pass, and Tunnicliff ran diagonally across the field until he reached the endzone for a 66-yard score.

Tunnicliff’s best skill was his speed. Arguably the biggest praise ever heaped upon him came from College Football Hall of Fame coach Skip Madigan. Madigan was in the Rose Bowl stands on New Years Day in 1949. After the game, he said Tunnicliff’s performance in the game was the closest thing he had ever seen to Red Grange, considered by some to be the greatest college football player in history.

Even with his skills as a runner, Tunnicliff never ran the ball as much as he would have wanted, and was used much more often to block. At 5-foot-11 and 155 pounds, Tunnicliff was far from the most imposing blocker. But he worked hard, and instead of going high as was common at the time, Tunnicliff would go low. It proved to be effective.

“I didn’t knock many of them down at 155 pounds, because I’m blocking 200-250 pound ends and linebackers, but some of them fell over me,” Tunnicliff said. “We had an All-American fullback in Art Murakowski, and I mentioned Frank Aschenbrenner. They were pretty fast. They weren’t too far behind me. So if you bothered somebody, these guys could be around them. You didn’t have to knock them down.”

“If I could,” Tunnicliff said. “I would like to read something to you.”

Surrounded by the 2019 Cats, coaches and a few others, Tunnicliff begins his approximately five minute honorary captain speech in the middle of Ryan Fieldhouse by taking the letter out of his pocket and reading it. His voice is soft and delicate.

“Now you might ask, why would I read that,” Tunnicliff said. “There are two reasons.”

His first reason is to credit the coaching staff. He starts by making a joke that only one coach — defensive coordinator Mike Hankwitz — might have been alive for the 1949 Rose Bowl, and the room erupts in laughter. He proceeds to talk about the coaching staff and the gratitude he feels because they invited him and his former teammates back. Tunnicliff adds the coaches are turning the current players not only into good football players, but also good citizens.

Everyone in the room stands tall with their eyes focused and ears attentive. There’s no disturbance in the crowd of listeners, an acknowledgement of the status of the speaker.

At this point, there are only two people in the middle of the circle: Tunnicliff and Fitzgerald. The similarities between the two go beyond being Cats legends. Both played their high school football in North Illinois before matriculating up to NU. Both were considered undersized, and had to earn their spots in the starting lineup.

And both have a deep respect for the other. It’s evident in the way Tunnicliff speaks of Fitzgerald, his coaching staff and program, and evident in how Fitzgerald looks at Tunnicliff, eyes open with arms folded or hands in the pockets of his gray slacks.

Tunnicliff moves onto his second point. He knows the team is coming off a tough loss to Stanford, but one loss doesn’t derail a season, he says. He says the 1948 team lost two games — to No. 1 Michigan and No. 2 Notre Dame, and still accomplished its goal of making it to Pasadena. He finishes by emphasizing the importance of the next day’s game against UNLV.

“Now you are going to have a chance to turn things around or Nevada is going to turn you around. But the only question, which one is it going to be?” Tunnicliff said. “I just want to wish you good luck and I’ll sure be watching.”

The group of attentive listeners break out into an ovation for Tunnicliff as he says his final words. Fitzgerald then tells Tunnicliff to help break the team down for the day, which he does. The team yells “Win!” on three.

About 24 hours later, NU turned around the Rebels. With the five legends watching, the Cats sent UNLV back to Las Vegas with a 30-14 loss in its pocket.

Fitzgerald called the speech “unbelievable” and one of the most special he has heard in a long time. Having Tunnicliff share his words and challenge the team, he said, left an impact.