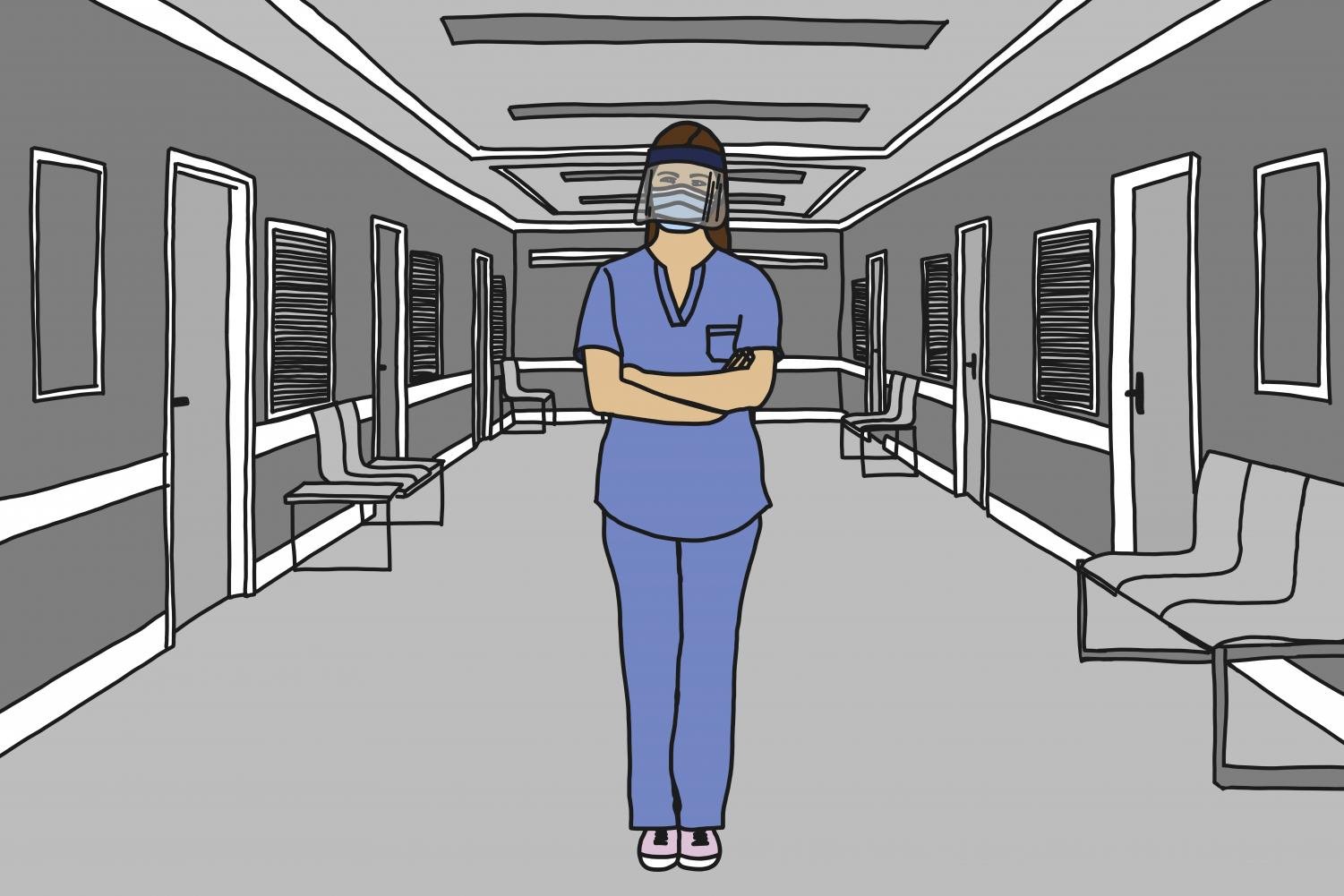 A masked health care worker in a hospital hallway. For those who are Deaf, masks can create barriers to communication in emergency care. (Illustration by Emma Ruck)

A masked health care worker in a hospital hallway. For those who are Deaf, masks can create barriers to communication in emergency care.

When health care depends on communication, masks and VRIs can prevent Deaf individuals from accessing treatment

When Rogers Park resident Bridget Nitsch woke up one morning last April, she thought she was going to spend an ordinary day with her two young children. Then, her water broke.

Bridget Nitsch had opted for a natural birth, and she wasn’t due for a few days. But when the contractions hit early in the morning, she knew it was time. However, Bridget Nitsch and her partner, who are both Deaf, couldn’t reach 911 until connecting with Bridget Nitsch’s mother through a video call. By the time the paramedics arrived, the baby’s head was halfway out.

Bridget Nitsch and her partner can read lips with American Sign Language, but the paramedics refused to take off their masks or gloves due to COVID-19 precautions.

“They were talking, but there was no communication,” Nitsch said through an interpreter. “I couldn’t speech-read anything they were saying, because of the masks. And then the baby came out.”

Darci Zook, secretary for the Illinois Association of the Deaf, said through an interpreter that Bridget Nitsch’s experience with masked emergency services is a “really common” situation for those who are Deaf. According to the National Association of the Deaf, “Deaf” can refer to the community of people who use ASL or to the Deaf culture, while “deaf” refers to the audiological condition.

Often, those who are Deaf rely on facial expressions and mouthing movements coupled with ASL to communicate, Zook said. As a result, masks that prevent COVID-19’s spread also present major accessibility challenges for Cook County’s over 150,000 residents who are deaf or have severe hearing loss.

“I was trying for them to see me through the video,” Marleni Nitsch said. “Because the phone was right there by them. And I said, ‘Ay, ay, ay! Do you need anything? I’m here to answer questions.”

Due to COVID-19 policy, restrictions limited the number of people allowed inside Bridget Nitsch’s room, and the hospital didn’t have enough advance notice to connect Bridget Nitsch with an in-person ASL interpreter.

“How was I supposed to know what was going on when they all had masks on?” Bridget Nitsch said. “They had a Video Remote Interpreter, which was just god-awful. It kept disconnecting. But it was all I had.”

Bridget Nitsch ended up calling her mother through a nurse’s video phone, so Marleni Nitsch translated in the VRI’s stead.

Marleni Nitsch said she often serves this role for Bridget Nitsch. She lives close to two hours away from Bridget Nitsch, but accompanies her daughter to interpret hair appointments, clinic visits and anything in between.

NorthShore University HealthSystem’s website instructs patients to reach out to nurses and caregivers and arrange for interpretive services before receiving medical care.

Richard Silver, chairman of NorthShore’s department of obstetrics and gynecology, said in an email that NorthShore “would of course make an exception or find a way to facilitate communication (with mothers who are Deaf).” He said VRIs are one example of a method NorthShore uses to provide accessible care.

Both the interpreter and the recipient need high-quality video to clearly record ASL through a VRI system. If one side has poor broadband, communication access is limited, said Amber Smock, director of advocacy for Access Living, in an email. Access Living is a Chicago organization that supports people with disabilities.

“I’m not totally against it, but it would depend on the situation,” Smock said. “If I were having major surgery I would want someone there in person.”

Zook said VRIs often leave room for “misinterpretation.” Because on-screen interpreters aren’t fully immersed in their client’s environments, they can miss chances to interact and communicate with every involved party.

The barriers COVID-19 has exposed, Zook said, should alert hearing individuals to re-evaluate and transform communication systems that are inequitable.

Smock said she defines discrimination as “denial of equal opportunity to care and to making decisions about one’s own care.”

“Medicine relies on communication,” Smock said. “Deaf/deaf and hard of hearing people are at risk of experiencing barriers to communication in a wide range of ways.”

In his guidelines for healthcare facilities, Pritzker said services should offer “reasonable accommodations that provide meaningful access to information” to people with disabilities, given that those accommodations allow for precautions against COVID-19’s spread.

Now, Bridget Nitsch and her baby are both healthy and safe — but Bridget Nitsch said just thinking about her experience with the paramedics and the hospital is “rough.”

Discrimination is everywhere, Marleni Nitsch said. She sees no one making an effort to communicate with Cook County’s deaf population. It’s “like they don’t exist,” she said.

“We are kind of used to that situation,” Marleni Nitsch said. “But things need to get better. (Deaf individuals) are people too. They are human beings. This is the worst case, delivering the baby … but this happens every day. In little things. In big things.”