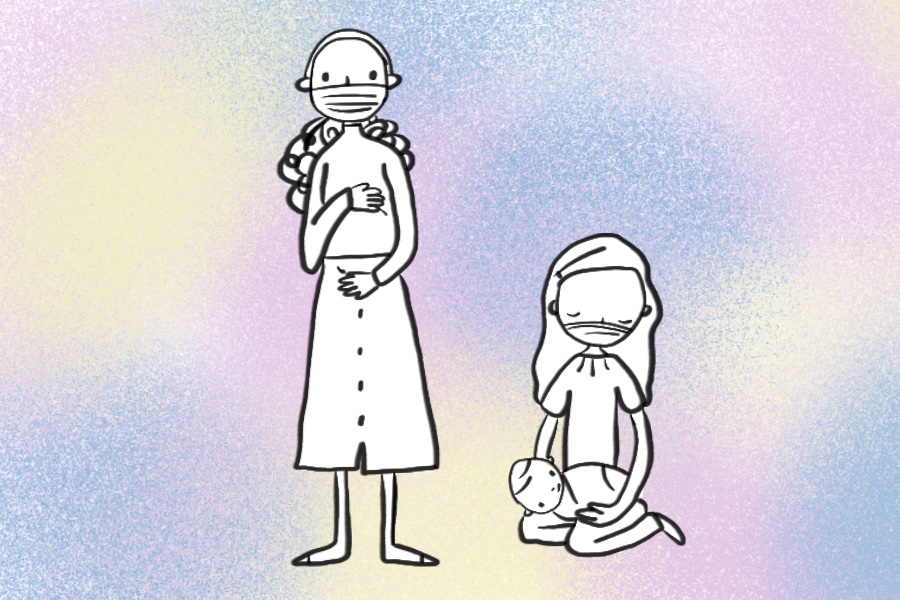 “The show must go on”: Evanston’s new and expecting mothers confront anxiety, isolation

Tracy Henriques, who’s expecting to give birth at NorthShore Evanston Hospital at the end of May, said she’s concerned about having a baby while wearing a mask.

When she gives birth, Henriques will join hundreds of local mothers who have delivered infants during COVID-19. About 350 mothers have delivered babies at NorthShore University HealthSystem facilities this April, chairman of NorthShore’s Department of Obstetrics and Gynecology Richard Silver said. Mothers give birth at NorthShore’s Evanston and Highland Park locations, and not at its Glenbrook facility, where COVID-19 patients are currently receiving care.

“Obstetrics is one of the few areas where the show must go on,” Silver said. “We have no latitude in terms of postponing care.”

Procedures have evolved over the past six weeks. At first, Silver said NorthShore didn’t require mothers to wear masks. Now, they must wear masks through delivery, just as physicians and nurses in the room are required to wear personal protective equipment.

Additionally, NorthShore only allows one support person, such as a partner or friend, in the labor room — a policy that leaves Henriques feeling “anxious.”

Henriques was planning to use a doula — a person trained to support her through labor and delivery — for the unmedicated birth of her second child. Henriques said her doula, who gave her massages and suggested specific positions to ease the process, was “really important” in assisting with her first natural birth.

Henriques still plans to have an unmedicated birth in Evanston Hospital next month. Her partner will be in the room, but her partner doesn’t have the same specialized knowledge as her doula, and she’s worried.

“The things that you had planned, you realize they’re slipping away, out of your control,” Henriques said.

Having young children can feel isolating even in the absence of a pandemic, she said, but COVID-19 has undone her support network.

During the first few weeks postpartum, Dalmau Holmes had planned to send her older daughter either to daycare or her mother-in-law’s house for part of each day, allowing Dalmau Holmes to focus on caring for her infant. But her daughter’s daycare has shuttered due to coronavirus concerns, and Dalmau Holmes’ mother-in-law is a pediatrician, so she can’t see the family.

Dalmau Holmes and her partner, she said, feel stranded.

“Within a few days, it went from having all of the support and resources to nothing,” she said.

The two have been running on four hours of sleep per day for the past month and a half, and Dalmau said she has no idea whether the daycare will open in the fall.

Ellie Shevick, who delivered her infant at Evanston Hospital on March 24, said she’s also feeling the absence of her friends and her extended family. Like Dalmau Holmes, Shevick is struggling to split her time between her newborn and toddler daughter, she said.

“My three year old, she’s an old soul,” Shevick said. “She can verbalize, ‘Mommy, I’m feeling sad because you have to give attention to the baby.’ That’s deep, and that’s really heavy to handle.”

Shevick had to leave the hospital 24 hours after she had her baby — a tight turnaround. Her husband runs his own business, so his paternity leave ended quickly, leaving her to care for both children practically non-stop.

She said the pace is taking a toll on her postpartum body.

Local hospitals are taking precautions to protect patients and staff in the obstetrics ward. Silver said NorthShore has reduced on-site staff in pregnancy care so that only a third of the department’s practitioners are present at any time. Physicians spend five days on-site in the ward and ten days at home — enough time for coronavirus symptoms to appear.

The “platooning” system is intended to protect obstetrics staff from mass infection, Silver said. He added that NorthShore’s strategy for pregnancy care will continue evolving in accordance with public health guidelines.

But for expecting mothers like Henriques, the uncertainty induces anxiety.

“The policies are constantly changing,” Henriques said. “It’s not like I’ll be able to plan and know what the policy will be when it’s actually time for us to go to the hospital. This is how it is now, but it could change any day.”