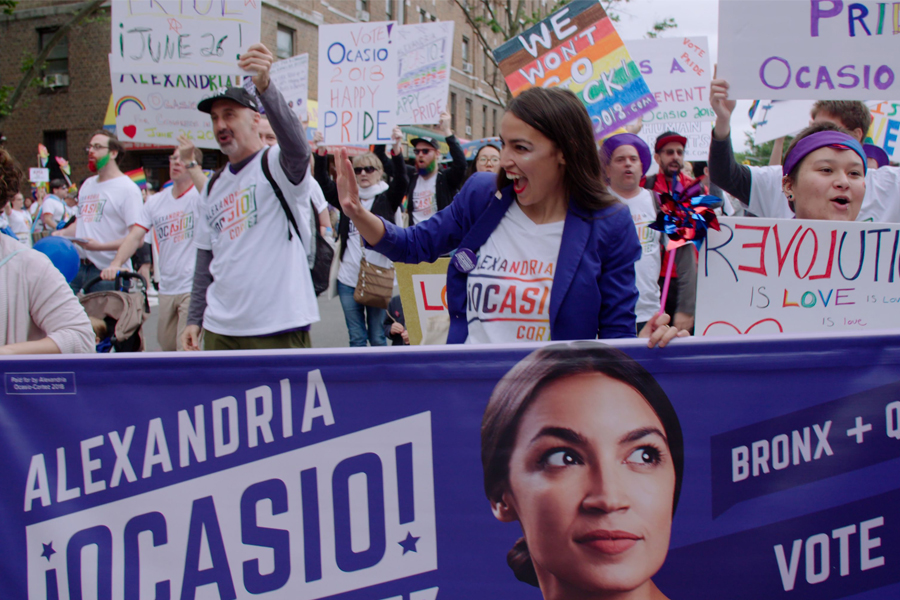 Alexandria Ocasio-Cortez campaigns in “Knock Down the House.” The documentary follows four progressive women who attempt to unseat career politicians in elections across the country. (Courtesy of Netflix Media Center)

Alexandria Ocasio-Cortez campaigns in “Knock Down the House.” The documentary follows four progressive women who attempt to unseat career politicians in elections across the country.

Today, pretty much every American has heard of Alexandria Ocasio-Cortez, the Congresswoman from New York. However, this wasn’t the case only a year ago. Rachel Lears’ documentary “Knock Down the House” chronicles Ocasio-Cortez’s journey from working as a bartender to defeating then-Congressman Joe Crowley in the primaries, ultimately being elected to the House of Representatives.

But this film isn’t simply a profile of Ocasio-Cortez. It’s the story of three other progressive women who attempted to unseat career politicians in elections across the country. It’s a testament to the power of grassroots movements. And, to quote Ocasio-Cortez, it’s a reminder that “in order for one of us to make it through, 100 of us have to try.”

Ocasio-Cortez is the main focus of the documentary, not only because of her dynamic personality, but because she was the only one of the four women to win her election. And because of this emphasis on Ocasio-Cortez, the documentary seems designed to give viewers hope for the future of American democracy. It couldn’t have accomplished that task without a happy ending.

Many viewers of this documentary are probably somewhat aware of Ocasio-Cortez’s journey to Congress. But Lears sets her film apart by providing never-before-seen insight into the Congresswoman’s personal life. Lears introduces viewers to Ocasio-Cortez’s family, illustrates the efforts she took just to get on the ballot and reveals the stress she felt before a debate with then-Congressman Crowley. All these details make her underdog story that much more meaningful, showing that Ocasio-Cortez isn’t just a big personality or social media sensation — she’s a real, vulnerable human being. And her story is an uplifting reminder that regular human beings can make a substantial difference in this country.

Lears also gives viewers glimpses into the campaigns and personal lives of Missouri’s Cori Bush, West Virginia’s Paula Jean Swearengin and Nevada’s Amy Vilela. And while each of these women has her own compelling story, they all end up taking a back seat to Ocasio-Cortez. Additionally, Lears frequently jumps from one woman’s perspective to another, making the documentary more confusing than it needs to be. These women’s stories are perhaps better suited to a four-part miniseries than a single nonlinear film.

Despite its unnecessarily complex structure, the film’s messages are clear. Images of poverty in West Virginia, the Ferguson unrest and an absentee Congressman in New York highlight the U.S.’ various socioeconomic and political problems. Footage of progressive group Justice Democrats’ meetings emphasize the country’s need — now more than ever — for grassroots political action. Ocasio-Cortez’s victory shows viewers that the underdog can win. Yet the other women’s stories remind viewers that in the country’s current state, such a victory is nearly impossible.

Before the film even starts, any politically aware viewer knows how “Knock Down the House” ends. Ocasio-Cortez wins a seat in the House of Representatives, and her story inspires other young progressives to make a difference in their communities. This predictability might suggest that the documentary isn’t worth watching, but that’s far from the truth. Where Lears’ film truly shines is in its depictions of the more intimate, human moments in its subjects’ lives.

It’s in those moments that the documentary transcends politics. Regardless of whether they won their respective elections or people agree with their politics, the four women in “Knock Down the House” are ordinary people who accomplish extraordinary things. And though the film’s message about the power of the underdog may not be the most original one, it’s certainly inspiring.

Related Stories:
— ‘Avengers: Endgame’ brings a satisfying end to a pop culture phenomenon
— ‘Us’ seeks to scare and intrigue — and succeeds at both