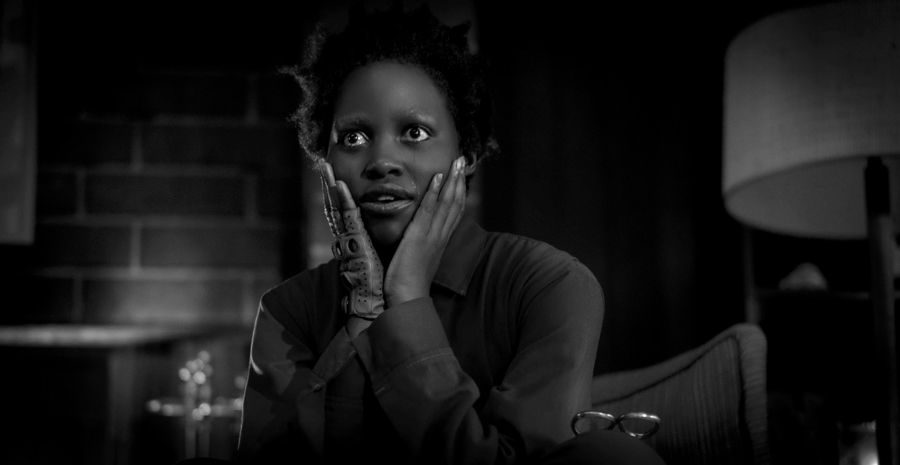 Adelaide (Lupita Nyong’o) grapples with her Tethered self in “Us.” (Source:Industrial Light & Magic/Universal Pictures)

Adelaide (Lupita Nyong’o) grapples with her Tethered self in “Us.”

‘Us’ seeks to scare and intrigue – and succeeds at both

This piece includes spoilers for the movie “Us.”

Unlike other reviews, this piece will not compare “Get Out” to “Us.” The former, Jordan Peele’s directorial debut, is a satirical commentary on American racism first and a horror movie second. The latter, Peele’s second film, with its use of typical horror conventions, is primarily of that genre, with commentary on identity and American social inequality woven throughout. Peele’s two films are profoundly different from each other, so comparing them makes little sense. Instead of comparing the two films, this review will treat “Us” as its own entity.

“Us” follows Adelaide Wilson (Lupita Nyong’o), a woman haunted by a meeting with her doppelgänger at a carnival during her childhood. When she, her husband and her two children take a trip to Santa Cruz, they are attacked by a mysterious family of four who reveal themselves to be the Wilsons’ doppelgängers. Adelaide’s doppelgänger — referred to as “Red” — tells the Wilsons that every American has a doppelgänger who is trapped in a network of underground tunnels. These doppelgängers, who call themselves “the Tethered,” plan to kill their surface-dwelling doubles.

The rest of the movie is a gory, disturbing thrill ride that culminates in an unsettling ending: in the film’s final scenes, we discover the Adelaide we see as an adult is not the Adelaide we saw as a child at the carnival: she is one of the Tethered.

Yet the most intriguing aspect of “Us” is its critique of American social stratification. Even the film’s title, “Us,” doubles in meaning: it refers to “us” as individuals and the “U.S.” Early in the film, we learn that the Tethered exist only in the United States. The film begins by describing the expansive network of subterranean tunnels below the U.S., and when Adelaide asks Red, “Who are you?” Red responds, “We’re Americans.” Here, Peele explicitly spells out one of the underlying themes of the film: a rare misstep in an otherwise spectacular film. But despite the less-than-subtle writing in this scene, the separation between the Tethered and those who live on the surface remains a brilliant metaphor for the disparity between upper- and lower-class Americans. Lower-class individuals, represented by the Tethered, are physically trapped underground, rendering upward mobility impossible.

Every detail in “Us” is intentional. Two early shots in the film, a shot of rabbits in cages and a 1980s Hands Across America commercial, foreshadow the film’s disturbing ending. Additionally, Peele’s repeated references to the Bible verse Jeremiah 11:11 serve two purposes. The number 11:11 appears to be a mirrored image of the number 11 — a subtle nod to the movie’s theme of duality. Furthermore, the verse itself, which references an inescapable evil, parallels the film’s theme of the evil that lies within us. The genius of “Us” lies within these ostensibly insignificant details.

And although “Us” diverts from classic horror films, Peele reveals himself to be a fan of the genre through the film’s visuals. The scene in the house of mirrors is reminiscent of the dark German Expressionist films of the early 20th century. The Tethered’s use of scissors as murder weapons evokes memories of slashers like “Nightmare on Elm Street” and “Halloween.” The Tyler twins’ doppelgängers parallel the twins in Stanley Kubrick’s “The Shining.” Peele’s use of classic horror tropes does not redefine those conventions in any significant manner, but instead pays homage to the genre in a film where its commentary is anything but typical.

While “Us” is first and foremost a horror movie, it is a thought-provoking one, filled with complex questions and nods to its predecessors. And while it’s primarily a horror film, you need not be a fan of the genre to enjoy it — Peele lets the film stand on its own.