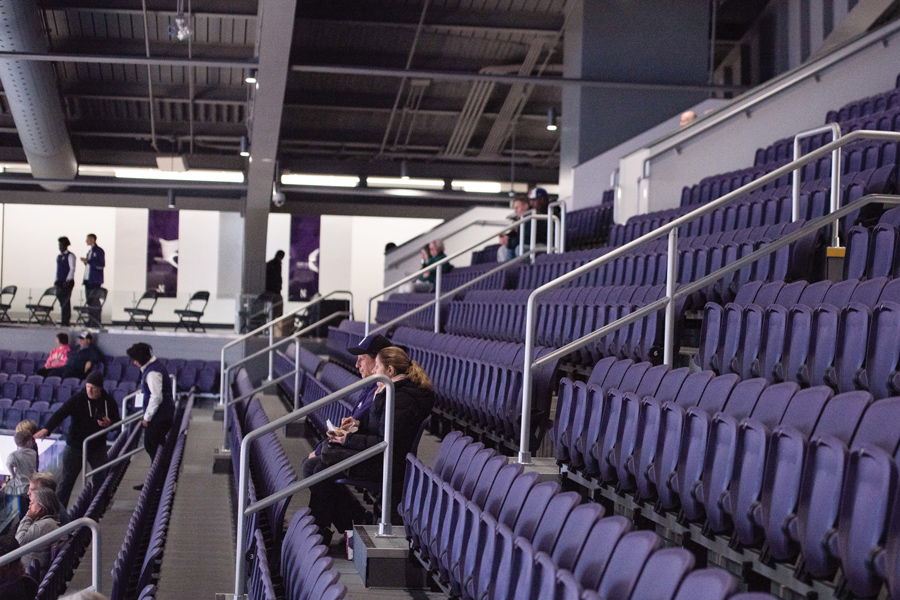 The rafters of Welsh-Ryan Arena. There are no banners (Daily file photo by Katie Pach)

The rafters of Welsh-Ryan Arena. There are no banners

Men’s Basketball: Why does Northwestern not honor the 1931 national champions?

Almost everything about the reopened Welsh-Ryan Arena is new — the stands, the court, the food options, the size. But there is one new aspect that looks back on the old.

Among the new additions are panelings on the outer walls of the concourse recognizing some of finest basketball players, volleyballers and wrestlers in Northwestern history.

There are some names that are very familiar to students — like Bryant McIntosh — and some that almost no one has heard of — like Arthur “Dutch” Lonborg.

Lonborg’s placard is not in prime viewing location — it is the last panel on the second floor before heading down the northeast staircase. It is a perfect metaphor for how he is remembered on campus.

Lonborg is arguably the best basketball coach in Wildcats history. He coached NU from 1927-1950, finished with a school-best 236 wins and coached the only two Big Ten champions in school history. He is also the only Cats coach from 1917-2013 who had a career record over .500, and his 23-season tenure is the longest of any of the Cats’ 24 coaches. Yet, it is hard to find any recognition of that on campus.

That is not surprising. Northwestern athletics has changed tenfold since Lonborg last coached in 1950, and it is tough to recognize coaches and players from an era that began before the Great Depression. It is only recently that some of NU’s other famous sportsmen — Ara Parseghian, for example — are receiving their deserved remembrance.

However, there is one simple, easy way that the University can recognize Lonborg and his most successful team — by hanging a 1931 national championship banner in Welsh-Ryan Arena.

They finished the year with a 16-1 record and 11-1 record in the Big Ten Conference. The 1932 Syllabus yearbook said the team was “one of the speediest quintents in the conference,” played aggressively, had a “fast-breaking offense” and was a good shooting team.

The team was led by sophomore forward/center Joe Reiff, who was the conference scoring leader and an All-American. NU only averaged about 33 points per game, but the sport was different and scores were much lower then than they are now. The Cats beat Notre Dame 20-17 on Jan. 3, 1931, which was four days after they held Alabama to 10 points.

“The team is the greatest basketball team I have ever seen,” University President Walter Dill Scott told The Daily at the time. “When they get going, they put on a perfectly marvelous exhibition. The native ability of every player, the team spirit that they have developed, all added to the magnificent coaching of ‘Dutch’ Lonborg makes this team, in my estimation, one of which Northwestern should be justly proud.”

At the time, there was no postseason tournament. The NIT did not begin until 1938, with the NCAA Tournament following a year later. The Cats were recognized as Big Ten champs in 1931, but that was it.

Benton Bajorek, a graduate student at the University of Kansas who is conducting research on the Helms titles, said that there is evidence that a committee of people selected the champions, while there is also evidence that one person conducted the research. Either way, the titles have caught on and become the most famous pre-NIT title awarded.

In the NCAA’s “Division I Men’s Basketball Records” book, the Helms Foundation winners from 1901 to 1948 are listed with the following blurb.

“The Helms Foundation of Los Angeles selected the national college men’s basketball champions from 1942 to 1982 and researched retroactive picks from 1901 to 1941. The Helms winners are listed in this section to the time The Associated Press (AP) poll started in 1949.”

In Northwestern’s 2018-19 Media Guide, there is no reference to the 1931 Helms National Championship.

You may be thinking, “That is not a real title.” Or “I’ve never heard of other schools recognizing these titles.” Or maybe, “There has to be a stigma to claiming one of these titles.”

All three of those statements are false. Some of the most storied programs in college basketball proudly showcase their Helms titles.

“There is always going to be a benefit to claiming these national championships,” Bajorek said.

The Daily reached out to the Athletic Departments of all the schools that were awarded a Helms title from 1901 to 1937, the final season before the NIT. Besides Northwestern, 23 schools were awarded a championship from the Helms Foundation. Twenty-one schools responded to the survey, with one of those 21 refusing to answer the question, and information for one non-respondent school was found online.

Eighteen schools said that they claimed the Helms title, with only one school — Notre Dame — saying that it views the Helms title as a lower-level title. Of those 18 schools, 10 of them have having banners in their arenas signifying the titles, with seven not having banners and one not clarifying.

In Allen Fieldhouse, national championship banners for Kansas’ 1921-22 and 1922-23 teams, winners of the Helms Foundation retroactive title, hang alongside their banners for their 1952, 1988 and 2008 NCAA Tournament-winning teams. And all five banners say the same thing: National Champions. At the Smith Center, there is a banner honoring the 1923-24 North Carolina team that won the Helms title that hangs alongside the Tar Heels’ four NCAA Tournament banners, and they all look the same except for different logos.

In their survey responses, both blue bloods had very similar answers to why they claim their titles and raise the banners. For UNC, it is “because we were selected.” For Kansas, it is “because they are national titles awarded to Kansas.”

Many of the schools that did not claim a title or raise a banner had different reasons for doing so. A spokesperson from Kentucky said the University only recognizes champions awarded by the governing body of the sport. No one in Dartmouth’s athletic department knew of the title. NYU claims the title, but does not have a gym to hang a banner.

But the majority of teams do claim the titles and honor the team in some way, and there were two main reasons that stuck out for claiming these titles. One was that the team was awarded the Helms title. The other was that it recognizes a team of which the University is historically proud.

During a meeting with Athletic Director Jim Phillips in November, Phillips told the Daily there should be a more serious discussion about honoring the team with a championship banner.

“I love the history piece of it,” Phillips said. “I think you have to really pay tribute to those who come before. You just have to. It’s the only right thing to do.”

When asked at a media availability session in December, coach Chris Collins called the question of the banners “thought-provoking” and said he did know the reason why there are none in the Arena and did not want to speculate.

“It is something we should definitely talk about, but I don’t have the right answer so I don’t want to give you some bad information,” Collins said. “There is no reason why we do or do not but we should look to honor those guys in some way.”

Three schools — Columbia, Illinois and Notre Dame — have recently had internal discussions about honoring their Helms Titles with banners, with differing results each time. Columbia discussed adding a banner, but ultimately voted against it. Notre Dame decided to take down their Helms banner. But Illinois decided to add the banner.

After the 2013-14 basketball season, the State Farm Center in Champaign underwent a renovation. Kent Brown, Illinois’ associate director of athletics, media relations, said that during meetings about the renovations, the idea of a banner for the Helms title was brought up. People in the meetings had seen other schools showcase banners in their own arenas.

“We had always noted it in our media guide and in whenever we talked about things,” Brown said. “As we looked at doing some stuff in our arena, we thought that would be a great opportunity to go ahead and have something a little more visible and more public.”

Brown said that the measure was not discussed outside the athletic department and there was no pushback at all to the measure. He added that even if the renovation had been done 10 years earlier, the University would have probably raised the banner then as well.

Even though Northwestern missed the opportunity to raise a banner during the Welsh-Ryan renovation, the school can still put one up. These banners — like the placards on the walls or the interactive panels in the front of the arena — are all about remembering, recognizing and respecting history.

The idea that Northwestern does not have any substantial basketball history because it failed to make an NCAA Tournament until 2017 is not true. The Wildcats’ history may not be rich, but there are a few diamonds in the rough — and the 1930-31 team is the crown jewel.

Lonborg is one of only three inductees into the Basketball Hall of Fame with a Northwestern connection. Reiff is the only player in school history to be named to two All-American teams. And Helms is not the only organization to call NU the champions that year. Over 50 years after the announcement of the Helms recognition, two basketball historians released their own list of pre-AP Poll national champions and the Cats were once again awarded the 1930-31 title.