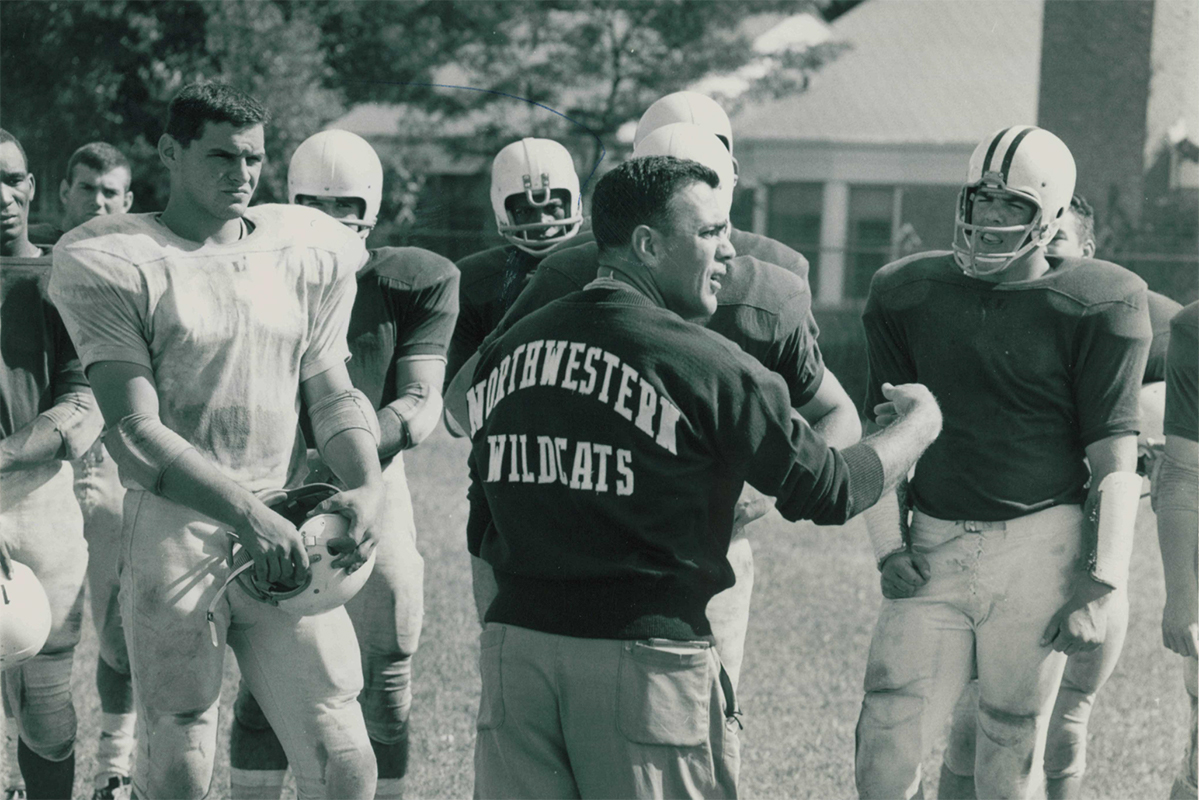 Fifty-four years after Northwestern’s most recent tenure as the nation’s No. 1 football team, members of the remarkable 1962 team gathered last fall for a reunion with their then-93-year-old coach: Ara Parseghian.

They said it felt like 54 years hadn’t passed at all.

“My god, he’s no different than he was in his 30s,” said team captain Jay Robertson.

But in terms of health, however, he was different, and the now-94-year-old passed away Wednesday morning due to hip infection complications, pushing his legendary achievements at Notre Dame back into the spotlight.

Parseghian revolutionized the way football was played at NU, adding a never-before-seen passing aspect to the team’s offensive system and making stars out of the most overlooked of recruits.

And Parseghian made an indelible impression on a cast of players who, now 55 years later, couldn’t stop chuckling about assorted Parseghian memories, impressions and anecdotes as they opened up to The Daily over the past two weeks.

In 1958, two years after Parseghian took over coaching duties at NU, Paul Flatley was having trouble deciding where to go to college.

“I can remember coming home every time and telling my mother, ‘Oh, I don’t know,’” Flatley said.

Then he met Parseghian.

“I came home and told my mother, ‘That’s where I’m going,’” he said. “Even if Parseghian went to Timbuktu University, that’s where I would’ve gone.”

It’s a story told time and time again: a Midwestern teenager, either disenchanted by any of his active suitors or unable to attract the interest of any other Big Ten schools, meets Parseghian and falls in love with his straightforward personality and anything-but-straightforward football tactics.

“He could look at you and look right straight through you,” said Isaac Smith, an offensive tackle from 1959 to 1961. “There was a genuineness to Ara … (that) had an appeal.”

Upon such player’s arrival in Evanston, the coach with “kerosene eyes and an infectious attitude,” as described by 1959 and 1960 leading rusher Mike Stock, found a way to find talent in the player that conference rivals had never noticed.

If none of that worked, he wasn’t afraid to bench or threaten to bench players for one bad game, several attested.

Or, in the case of sophomore quarterback Tom Myers in the 1962 season opener against South Carolina, even for a good game.

“We beat them pretty handily and I had a really good outing, but I also threw two interceptions, and as I was walking back to practice the first day after we played that game, Ara said, ‘What’s with the two interceptions?’” Myers said, laughing at the memory. “I thought he was going to say, ‘Boy, you really had a good game Tom, hope we can keep it up.’”

Despite being “a person to certainly not let anybody get carried away with their successes,” Parseghian developed a reputation of mutual respect and determination among his players, Myers said.

Having played himself at Great Lakes naval station — under Paul Brown, later of NFL renown — and at Miami (Ohio) in the 1940s, and having served briefly as an assistant at Miami, Parseghian came to NU in 1956 at the relatively young age of 32. He brought a level of genuine enthusiasm and tenacity to the coaching position that rubbed off on the entire team, Robertson said.

“When he’d look at you, he’d kind of cock his head to one side, and even as a fifth-year player, I would get nervous … because you just didn’t want to fail or let him down,” said Robertson, a center. “You just became part of him, and I think every player would probably say that.”

Parseghian also became notorious for his early planning. The coaching staff immediately started reviewing film on Sundays — an unusual habit in that era — and didn’t wait long after to craft the game plan.

“If the game was on a Saturday, we’d be ready to play on Thursday,” Flatley said.

“You left Tuesday’s (team) meeting and you felt, ‘You know, we’re going to beat these guys,’” he said.

On the front page of each game week’s playbook packet, Parseghian included a typewritten document listing bullet-point reasons why the given game was important.

Every week, one of the reasons was what Parseghian called “Triple E and I” — effort, execution, endurance and interval. Other reasons were much more game-specific, such as when he wrote prior to a meeting against Ohio State, “Many of us are transplanted Ohioans, and nothing would be sweeter than a victory over Ohio.”

But if that weekly tradition epitomized Parseghian’s personality, showcasing his motivational skills and emotional investment in his job, the pages within demonstrated Parseghian’s true greatest skill as a coach.

In Robertson’s freshman and sophomore years, NU demolished a No. 2-ranked Oklahoma team 45-13 in Evanston and then 19-3 on the road the following year. It didn’t take long after that for Robertson to have a revelation about his new coach.

“His Xs and Os were way ahead of everybody,” Robertson said.

The Sooners entered the first meeting having won 60 of their last 62 games, largely because of a then-avant-garde hurry up-style offense. Against the Cats, however, it didn’t work.

Sports Illustrated called the colossal upset a “slight case of a murder,” but noted Parseghian, characteristically, was hardly flustered after the game.

“(Parseghian) looked exactly as he had beforehand — serious, alert, intense,” Kenneth Rudeen wrote on Oct. 5, 1959. “He bit into a big red apple and said, ‘This is the type of game you get every so often.’”

In the second meeting, Parseghian, knowing he had the Sooners reeling, proved to have another trick up his sleeve.

On one particular play, Parseghian had his offensive line assemble entirely to the right of the center and quarterback — for no purpose other than confusing Oklahoma.

“(It was) never seen before, never seen after, and it was nothing more than to build up anxiety in the defense,” halfback Larry Benz said. “Once you could build anxiety up into them, people played differently. He had a great ability to put people in bad situations and then take advantage of it.”

Arguably Parseghian’s greatest tactical accomplishment came in 1962, though, when he revolutionized the team’s entire offensive structure around new personnel.

Aware that his roster didn’t have enough depth and injury replacements to compete with its Big Ten rivals in the trenches, but understanding that he had two emerging stars in Myers at quarterback and Flatley at receiver, Parseghian added at least one wide man — usually Flatley — to every play the Cats ran and opened up the passing game dramatically.

Many plays in the 1962 playbook appear drawn up specifically for a Myers-to-Flatley connection. One in particular, called the “Individual,” gave the wide receiver the option to run an “up” route, or an “in” route, or a “quick” route, or a “hook” route all under the same play designation — with little mystery about who said individual was intended to be.

Myers threw for 1,537 yards that season, good for fifth in the nation and nearly five times more than NU’s 1961 leading passer had. Flatley ranked seventh in the nation with 45 receptions, helping him get drafted into what became an eight-year NFL career.

“(Ara) was a creative, innovative person, and he just was not committed to that three-yards-and-a-cloud-of-dust style of football,” Flatley said. “Because of what Ara did, that’s why we were able to win the games we did.”

After a 4-4-1 first season and a disastrous 0-9 second year, Parseghian coached the Cats to a winning record in five of his final six seasons in Evanston — the only time the program has achieved that feat since 1931.

Spurred by the Oklahoma upset, Parseghian’s 1959 team started 6-0 and was ranked No. 2 in the country for over a month before dropping its last three games.

Three years later, Parseghian’s aforementioned 1962 team briefly topped the polls in October, sporting records of 5-0 and then 6-0 with wins over the likes of Ohio State, Illinois, South Carolina and Notre Dame. Only a road loss against No. 8 Wisconsin eventually cost the Cats their No. 1 spot.

Following a 5-4 season in 1963, Parseghian left to resurrect a Notre Dame program with a more prestigious history — and, as he proved, more potential to grow into a perennial dynasty. Myers said the players, aware of where both NU and Notre Dame stood in the college football hierarchy, had no hard feelings.

“When he left for Notre Dame, a lot of people didn’t like the way that happened, but I don’t think the players resented it,” Myers said. “They knew the writing was on the wall. If he could do what he did at Northwestern, think what he could at a school of the stature of Notre Dame.”

Years later, though, Parseghian was still paying dividends for his former players.

Stock, long after graduating from NU and entering coaching himself, found he still had the ultimate ace in the hole to land an assistant spot at Ohio State in 1992.

“I asked how to get the job and (head coach John) Cooper said ‘one man,’ and I knew who that man was,” Stock said. “If Coach Parseghian was going to recommend you, it was like gold.”

Time, unfortunately, has worn Parseghian’s NU legacy. His name has been largely forgotten in every category of the school record book. Cutting-edge college football offenses now feature five-receiver formations or the triple option or other kinks far more absurd than one designated wideout. The Cats, following a 14-game losing streak in the series, have now beaten Notre Dame in back-to-back meetings.

But in the hearts of those who played for Parseghian in Evanston — where he achieved unprecedented things for a long-maligned NU program — his transcendent intensity and creativity will never be forgotten.

“He was a leader strategically in technique, in tactics, in practice organization,” said Robertson wistfully. “I think even in those years, they said he was ahead of his time.”

This article was updated on Aug. 2 to reflect that Parseghian had passed away.