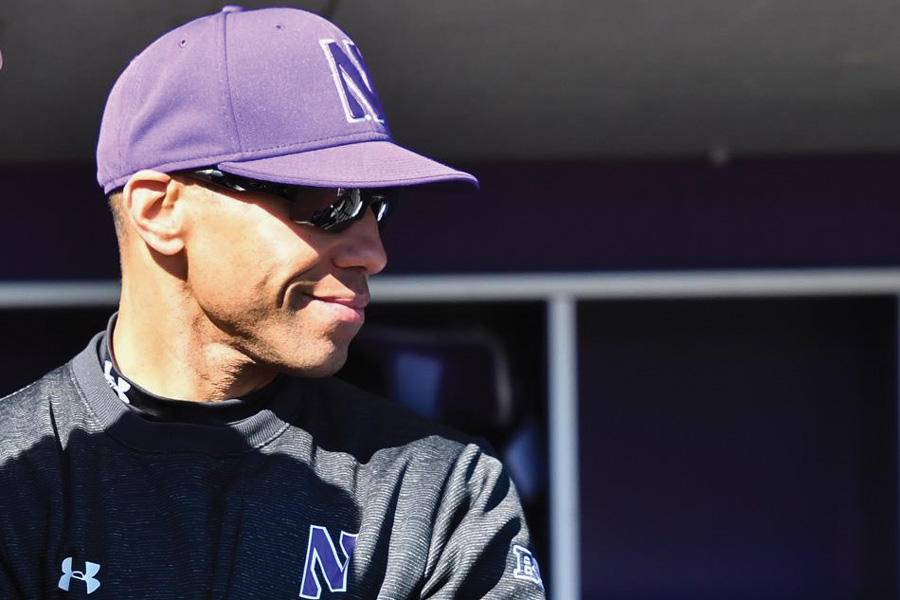 Spencer Allen looks out from the Miller Park dugout. Three years into his tenure, Allen said he is seeking to get more consistency out of his Wildcats. (Source: Northwestern Athletics)

Spencer Allen looks out from the Miller Park dugout. Three years into his tenure, Allen said he is seeking to get more consistency out of his Wildcats.

Spencer Allen’s office at Miller Park is fairly nondescript, save for the television mounted on the wall. Early on a Wednesday afternoon, it is tuned to the SEC baseball tournament, in which Texas A&M is on its way to upsetting No. 8 Georgia.

Allen is in that office, watching the game, but he wishes he wasn’t.

He wishes he was in Omaha, Nebraska, at the Big Ten’s equivalent affair. He wishes his Northwestern team had followed up its 2017 late-season surge with its projected 2018 breakthrough. He wishes the Wildcats hadn’t instead finished 17-32 overall and second-to-last in the conference.

Allen’s honeymoon in Evanston is over. The perfect upward ladder to success that Chris Collins’ basketball team followed and that Allen imagined for the baseball program has been knocked down to the dirty, ugly ground. The going-on-fourth-year coach knows it’s his job to make sure he isn’t watching Georgia baseball this time next year.

“In a twisted way, it’s fun sitting here figuring out, ‘OK, how are we going to get back to playing in the Big Ten Tournament this week and not watching on TV here,’” Allen said. “It’s fun to dig in and figure out how we’re going to get better.”

Charting Allen’s career prior to his arrival in Evanston looks like a 7-year-old threw a few handfuls of darts at a United States map.

The Olympia, Washington, native played at Oregon State and Iowa State, then jumped into coaching and made stops at Iowa, Purdue, Washington State, Creighton and Illinois before getting his first head job with NU.

It was not the volume of locations, however, but the experiences at each stop that molded him into the refreshingly positive and innovative 37-year-old that arrived at NU athletic director Jim Phillips’ doorstep in 2015.

As a player, Allen earned a scholarship to baseball power Oregon State but “quickly, quickly found out what college baseball was all about,” he said. Deciding he wasn’t cut out for the Pac-10, he ended up in Ames, Iowa, where he batted a respectable .263 over two seasons while planning a jump into a graduate assistant role.

“Now looking back, I understand, looking at the athletic program,” he said. “But at the time, (my reaction) was probably sadness, frustration and then going, ‘Oh crap, what am I going to do?’”

Allen became a high school history teacher, at least for a little while. Then, he got a volunteer assistant job at nearby Iowa. Finally, in 2004, came a real job on a real coaching staff at Creighton.

There in Omaha, Allen said he learned from head coach Ed Servais how to structure practices in thoughtful and effective ways, jumpstarting what has become a career-long focus on the importance of practice. Even later at Washington State, where Allen was primarily deployed as recruiting coordinator, then-Cougars skipper Donnie Marbut saw that keen eye in his young assistant.

“The thing about Spence is that he was always looking at a practice and thinking, ‘How can we make it better?’” Marbut said. “He wasn’t just a status quo type of person. … He was always passionate about the game, and he wanted to continue to elevate (the team).”

He learned not only from personal mentors like Servais, Marbut and Oregon State coach Pat Casey, he said, but also from national college baseball icons such as UCLA’s John Savage and Virginia’s Brian O’Connor. By 2015, during his final assistant stop, Allen helped guide Illinois to a 50-10-1 record and NCAA Super Regional berth.

He was ready to take over a program.

NU, of course, was not an obviously appealing choice. Despite the planned renovations to Miller Park, which were completed midway through Allen’s 2016 debut season, the program sported an unsightly history of ineptitude, having not made the NCAA Tournament since 1957 and having gone 18-36 during previous coach Paul Stevens’ final campaign.

The June 2015 announcement that Allen would replace the retiring Stevens would likely not have received much, if any, national attention if not for one unrelated fact: It made him the first black baseball coach in the Big Ten — ever.

That milestone sparked a wave of media attention into that racial vacuum within the sport’s leadership. For Allen, though, the fanfare surrounding the title of “Big Ten’s first black coach” was immediately something he was hesitant to incorporate into his identity.

That hasn’t changed in the time since.

“There have been a lot of more influential people than me that have come before me that helped pave the way, (so) it’s not something I want to make a big deal,” he said. “Now, on the flip side of that, if there’s a young boy out there that sees, ‘Hey, maybe I can be the President of the United States, or I can be a doctor, or a baseball coach,’ I think that’s a positive. And if there’s a positive that can come out of it, I don’t want to squash that either.”

Instead, Allen has tried to use his unique status not to direct attention toward himself, but to further a Major League Baseball-led effort to increase youth baseball participation in lower-income and minority households.

While black athletes represent 45 percent and 39 percent of NCAA men’s basketball and football rosters respectively, they make up just 4 percent of the NCAA baseball population, according to a 2016-17 NCAA report. But among the three sports, baseball has the highest rate of high school athletes who go on to play in college (and, in many cases, receive partial scholarships) — suggesting that if more minority athletes start playing grade school baseball, there could be more affordable college opportunities for those athletes.

Allen said the efforts he’s involved with focus on bringing baseball equipment, fields and organized leagues to 11- and 12-year-olds in inner cities, who otherwise would likely get their athletic fix through basketball. The Chicago White Sox have pioneered the campaign locally, and Allen said he wants to help introduce it to the Washington, D.C., and Seattle areas next.

Despite his charitable efforts on the side, the Cats’ program has done little to shake its reputation as a perennial loser after three years of the Allen era.

Save for a strange and probably flukey late-season run to the 2017 Big Ten title game with a sub-.500 record — even the skipper himself admits that team simply “got hot for about six weeks” — Allen’s teams have gone absolutely nowhere.

A year ago, after that rousing championship-game run and with the men’s basketball team still riding the high of its historic first NCAA Tournament bid, the former program seemed perhaps just a step or two behind the latter in their synchronous, collective rise. That perception, however, went down in flames this spring.

“The hard thing when you look at men’s basketball is that they had almost a ladder effect, whereas we’re going to have our own path,” Allen said. “What I hope is that when we look back in six, seven years, we’re going, ‘Yeah, though we took a little dip here, we still did reach the same thing (as they did).’”

The multitude of both hard-to-fathom blowouts (22-1 against Indiana, for example) and heartbreaking defeats clearly weighed on this year’s roster. “Everybody’s just been having a really difficult time,” junior outfielder Ben Dickey said late in the year.

“Losing two extra-inning games is not the way you imagine your senior weekend going,” senior catcher Jack Claeys said after a season-ending series loss to Belmont.

The numbers were almost as ugly as the results. Six relievers who made double-digit appearances had ERAs of 6.00 or higher. The majority of NU’s batting order hit worse than .237. As a team, the Cats averaged more than one wild pitch and more than one hit batter per game.

“We need more consistency,” he said. “That consistency was not there for really any stretch of the season, and when you’re not consistent, it’s hard to (determine), ‘Who do we use in this spot?’”

‘It takes someone special’

It was in Pullman, Washington, around the turn of the current decade, when Allen discovered his passion for recruiting.

“I really fell in love with the recruiting side of it, getting to know kids and their families,” he said. “Someone had told me, ‘If you don’t like to recruit, coaching is not (for you).’”

Those skills have been put to the test in recent years, as Allen now must battle NU’s lack of winning tradition, strict academic standards and cold, not-fit-for-baseball weather when trying to persuade recruits.

On the Wednesday afternoon Allen finds himself keeping one eye on his television, the temperature outside is actually pleasant. But it is even warmer in Hoover, Alabama, where the Aggies and Bulldogs are finishing up their second-round tournament game.

Allen half-watches while he talks, and as he does, an unmistakable undertone of chip-on-his-shoulder determination slowly arises.

It’s day four of the offseason. The coach is preparing for a long summer: “Two and a half months to figure out how to create that culture (of) consistency,” he calls it. Soon, it’ll be time to hit the road and put together another recruiting class.

And his pitch to every prospective member brings out a rarely seen fire in the typically laid-back coach’s words.

“I ask (them) the question: ‘Are you the type of guy that needs a guarantee, or do you trust in me that we can go do something special?’” Allen said. “Anyone can go say, ‘Georgia’s the No. 8 team in the country, they look good, they’ve been winning, I’ll go there.’ It takes someone special to see the vision and say that, ‘I want a challenge … but I want to be one of the first that gets to a regional here at Northwestern.’”