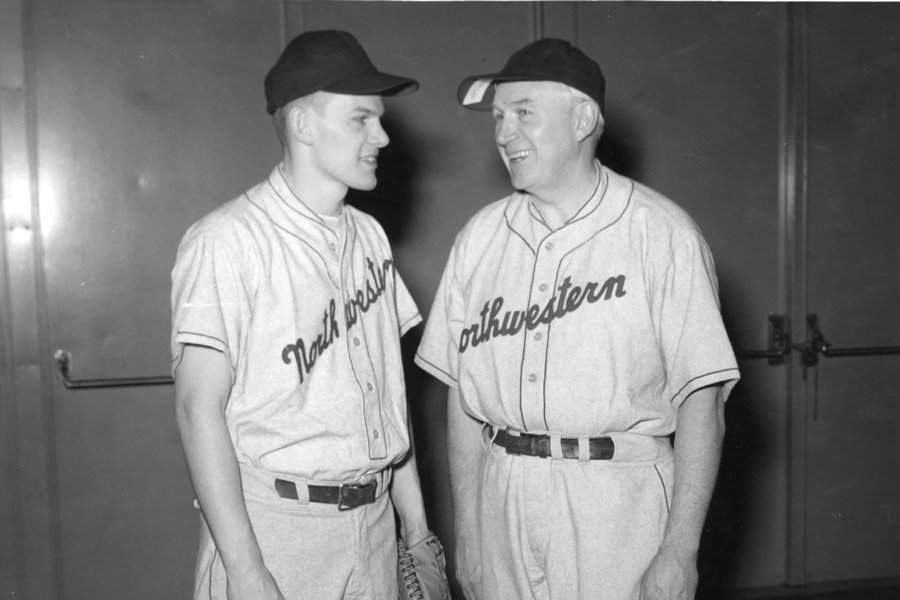 Chuck Lindstrom (left) and Fred Lindstrom (right) chat during a preseason workout. Chuck said his father was a “fantastic” coach.

Baseball: Six decades ago, Northwestern made it to college baseball’s biggest stage

The history of Northwestern baseball features more lows than highs.

Since the 1898 inaugural season of Big Ten baseball, the Wildcats have finished top three in the conference only 13 times.

But there have been highs, and there has been no season with more success than the remarkable 1957 campaign.

In addition to securing the Big Ten title outright for the first and only time in program history, 1957 was the only time NU ever made it to the NCAA Tournament. The Cats advanced to the final of its district, where they were stopped just short of a trip to Omaha and the College World Series.

The season, which seems to have been forgotten over time, was one for the ages.

No manager in Northwestern history has the pedigree of Fred Lindstrom, skipper of the 1957 baseball team.

Lindstrom, who was born in Chicago, signed a professional contract at 16 and reached the majors with the New York Giants at 18. During his first season, the Giants made the World Series and Lindstrom became the youngest person to ever play in the event. He played 13 seasons — the majority of which was with the Giants — and was a career .311 hitter.

After retirement, he managed for a few seasons in the minor leagues before becoming the Cats’ coach prior to the 1949 season. Over the next eight seasons, NU had only one losing year and an overall record of 98-85-1.

“He also not only had the natural instincts of being a very gifted player, he was unique that he had acquired a very positive attitude and he was able to instill that attitude to his ball players,” Chuck Lindstrom, Fred’s son, said.

Chuck Lindstrom was not only Fred’s son but also the star of the team. The catcher was nominated to the All-Big Ten first team in 1956 as a sophomore after hitting .415 in the conference and tying the previous Big Ten record for doubles with eight.

The younger Lindstrom was a batboy for NU while growing up and attended New Trier High School. Chuck Lindstrom had declined offers from UCLA and powerhouse Southern California to stay close to home to play for his father.

“I chose to stay at Northwestern and play for my dad because I thought that he was a very knowledgeable and outstanding guy,” Chuck Lindstrom said.

While Chuck Lindstrom may have been the team’s best player, the 1957 Cats were not a one-man wrecking crew.

When it rains, it pours

After a six-game Spring Break trip at the end of March, NU began its home season in April at Dyche Field with a doubleheader against the Chicago Illini (now UIC). Broeker was the star of the first game with three hits, including a grand slam home run, and the Cats won 18-2.

However, the second game of the doubleheader was canceled due to cold weather as snow had begun to fall during game one. That cancellation was a harbinger of the next six weeks.

“We had a lot of games that were snowed out or rained out,” Hook said.

In total, 11 games were canceled due to weather that season. More than half of NU’s scheduled Big Ten games — including a matchup with the 1956 College World Series champions, Minnesota — were never played.

But when the team got on the field, it found plenty of success. During a mid-April doubleheader, the Cats outscored Great Lakes 31-14 over two games. And they annihilated Glenview Naval Air Station by a score of 26-0 in May after their opponents committed 18 errors.

On the last Friday of the regular season, NU travelled down to Champaign to take on Illinois. The contest was a nailbiter.

The Cats got on the board in the fourth as Broeker scored on a Stranski single. That would be the only run scored by either team, as NU won 1-0 behind a complete-game shutout by Scheuerman.

That Friday’s result meant a Big Ten title was in play for the Cats. NU entered Saturday, the final day of the season, with a 5-2 record, while Iowa, the Cats’ main competition, entered with a 6-3 record. NU had two games at Purdue while Iowa had two games at home against cellar-dwellers Indiana.

“I can remember that we were all standing around on the field, but there had been a heavy rain the night before, and the field was unplayable,” Chuck Lindstrom said. “We wanted to go out and rake the fields and do everything to be able to play because we felt confident that we had a good chance of beating them.”

The field nonetheless remained unplayable, and with the Cats sidelined, all Iowa had to do was win both games over Indiana to secure the title.

The Hawkeyes took care of business in Game One, as they beat the Hoosiers by a score of 1-0. However, the second game was disastrous for Iowa. Not only did catcher Don Bock get “knocked out in a fistic exchange” in the seventh inning, as described by the Chicago Tribune, but Indiana also won the game by a score of 8-1.

The loss dropped the Hawkeyes to 7-4 in conference play, tying them with Michigan and Illinois for second and giving the NU the undisputed Big Ten title. For Hook, who had spent the winter winning only six games on the basketball team, it was a big deal.

“(Northwestern athletics) didn’t win a whole lot,” Hook said. “It was really a thrill to win something in baseball.”

The Big Ten title gave the Cats a birth in the NCAA Tournament. They were placed in the District 4 Sectional in Kalamazoo, Michigan, along with Notre Dame (who had beaten NU twice during the regular season), Western Michigan and Alma College.

The Cats’ first-ever postseason game was a disappointment, as a 7-run outburst from Western Michigan in the fourth inning sparked an 11-1 victory for the Broncos. NU came back strong the next day in its elimination game against Alma, defeating the school 11-2.

Notre Dame beat Western Michigan later that same day in the winner’s bracket, setting up a rematch between the Cats and Broncos for a spot in the District Final. The game ended up being a classic.

NU had a 5-3 lead heading into the top of the seventh, but Western Michigan exploded for 6 runs in the inning to take a 9-5 lead. After getting a run back in its half of the seventh, the Cats equaled the score in the eighth behind singles from Gary Bialk, Ron Smith and Broeker.

Sophomore outfielder Jim Cooper, who had just 18 at-bats during the regular season, was the unlikely hero. In the bottom of the 10th, he singled in Chuck Lindstrom to give NU the victory and a spot in the Regional Final.

The Regional Final was played later that same day, and the Cats sustained their momentum from earlier and beat Notre Dame for the first time all season, 9-2. Chuck Lindstrom proved to be the fulcrum for the offense, as he went 4-for-4 with a double and a triple.

Because the loss was only the Fighting Irish’s first of the double-elimination tournament, a second, winner-take-all game between NU and Notre Dame was scheduled for the next day.

In that elimination game, Notre Dame jumped out to a 1-0 in the first inning and never looked back. The Fighting Irish added 3 runs in the fourth and 2 in the seventh to put the game out of the reach. Poor baserunning plagued the Cats as they only managed to score 1 run.

The loss ended the Cats’ season with an 18-8 record. They have not played a single NCAA Tournament game since.

Following the season, three players — Chuck Lindstrom, Hook and sophomore Dave Hill — were offered contracts by major league teams and accepted them. Hook and Hill signed for bonuses over $4,000, so they were immediately placed on big league rosters. Hill debuted for the Kansas City Athletics on Aug. 22, while Hook appeared in his first game for the Cincinnati Redlegs on Sept. 3.

Hill would only pitch in two major league games during his career, all during that 1957 season with the Athletics. Hook, however, pitched for eight major league seasons and is most well-known for earning the first win in New York Mets history.

Chuck Lindstrom would play in the minors for a few more seasons before retiring at 24, but those seasons would not compare to his time in Evanston.

“I enjoyed my Northwestern experience more than I enjoyed professional baseball,” he said.

The loss of the three seniors — Broeker, Pienta and Stranski — and the three underclassmen to the pros proved to be consequential for the Cats. In 1958, NU dropped to ninth in the Big Ten and finished with an 11-15 record.

Although the baseball team has periodically jumped into the top half of the Big Ten standings, the Cats have yet to win another Big Ten title, with the closest call coming in 1984.

Fred Lindstrom would go on to manage NU for three-and-a-half more seasons before resigning in the middle of the 1961 season to become the postmaster of Evanston. Chuck Lindstrom said his father took the job because it supplied long-term benefits that his role at Northwestern could not provide.

In 1976, Fred was given the ultimate honor bestowed upon a ballplayer when he was elected to the Baseball Hall of Fame. While he was thrilled to be named a Hall of Famer, Chuck Lindstrom said his father was always honored to be linked to the University.

“My dad always felt as if one of the best things that ever happened to him was to have the opportunity to be associated with Northwestern University and the many fine people that he worked with,” Chuck Lindstrom said. “He felt that way to his dying days.”