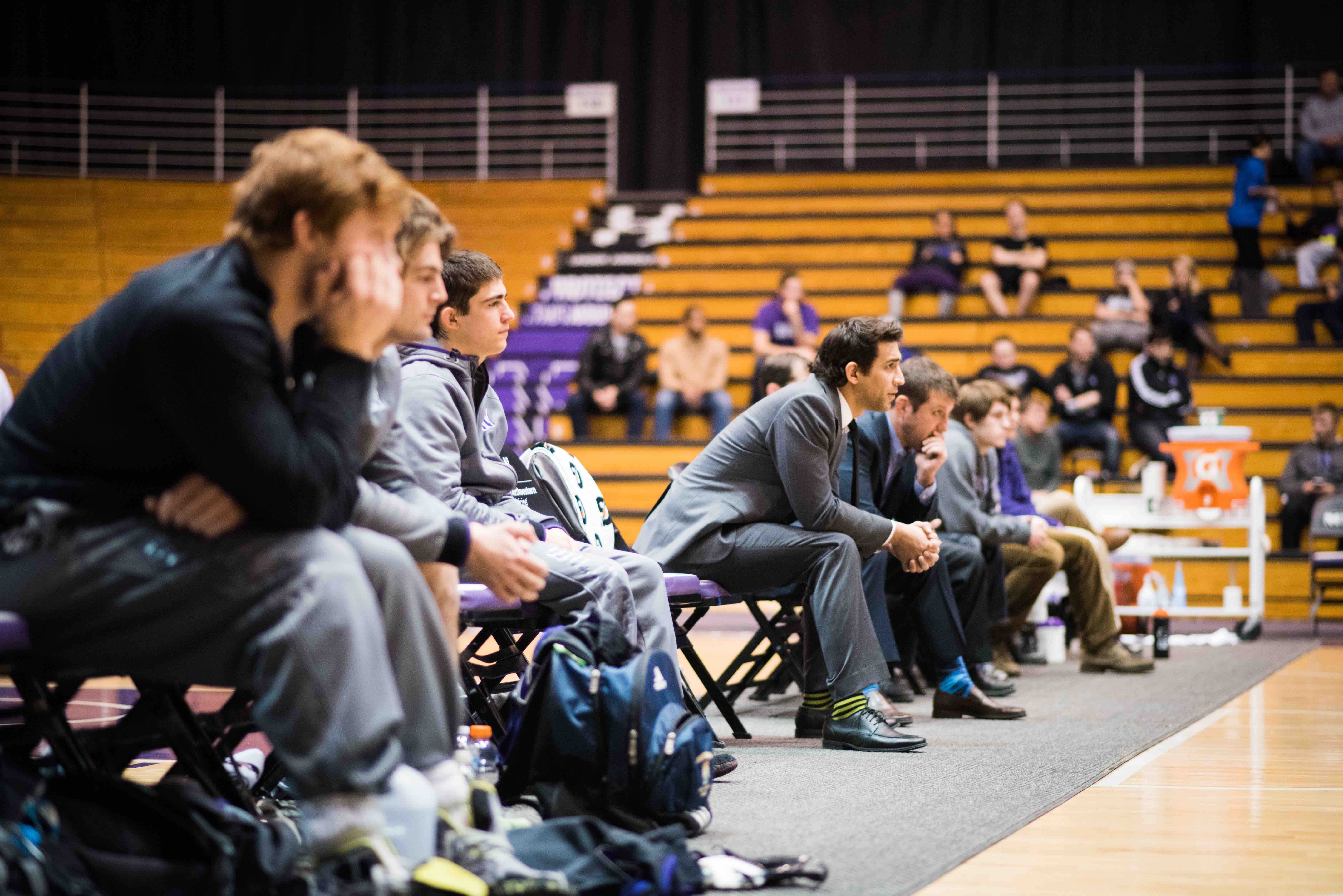 The Sideline: Storniolo takes on Big Ten as youngest coach in the conference

When Matt Storniolo took over for Drew Pariano at the beginning of the 2015-16 season, the then-interim coach paired his slicked back mullet with a waxed handlebar mustache. He showed up to duals looking professional in his gray lanky suit, but he often left the top button open, missing a tie — almost symbolic of his rapid transition from youthful college wrestler to Big Ten head coach.

Pariano, who left the program at the beginning of last season, said Storniolo learned quickly how to work with student-athletes and developed a skillset that is important for college coaching.

“He was the guy that was preparing himself to be a head coach, which is always what you want,” Pariano said. “He served six, seven years as an assistant coach and he learned a great deal in that time and you learn how to deal with the particular student athlete at Northwestern. You pick up on what motivates them and how to manage them through the academic rigors.”

However, Pariano said Storniolo possessed a creative ability that the former coach sometimes lacked during his coaching stay at NU, and said he devised ideas like bringing the team outside to do workouts on the Lakefill.

“I think there are a lot of differences, I’d rather let other people say them than myself,” Storniolo said. “But there’s more than one way to skin a cat.”

Storniolo started his wrestling career in 2003 with Penn State, when he was named the Big Ten Freshman of the Year and advanced to the conference final. But following his standout season, Storniolo transferred to Oklahoma after attending several camps run by then-Sooners’ coach Jack Spates, where he became acquainted with Spates and his sons.

During his three years at Oklahoma, Storniolo made his way to the Big XII finals every season, winning the conference championship as a senior. He qualified for the NCAA Championships every year during his collegiate career, and during his senior season he went into the championships ranked No. 2 in the country in his weight class.

“He didn’t lose to too many guys who weren’t monsters,” Spates said. “In fact if you’ve read about Jordan Burroughs, who is going for his fifth world championship this year if you count the Olympics, Matt Storniolo may have been his last college loss.”

Despite Storniolo’s dominance, Spates said he kept a calm, laid-back demeanor in the locker room. But when the 149-pounder stepped on the mat, he flipped a switch.

In 2004, Oklahoma took on Army in a dual where Storniolo was shut out 5-0. Spates was concerned about Storniolo going into his next match against Cornell’s defending All-American  Dustin Manotti, but he said what happened next was one of the defining moments of his wrestler’s college career.

“He just came out and put a whooping on him,” Spates said. “He was the guy who handled adversity and defeat well, he would bounce back and if he didn’t win one match he was going to win the next.”

After graduating at 23, Storniolo jumped at the opportunity to join Old Dominion’s coaching staff when he received a call from coach Steve Martin.

Age is only a number

Storniolo joined the Monarchs in 2007, when Old Dominion had an urgent need to improve its scrambling ability — a skill Storniolo was known for.

However, Storniolo said his coaching style isn’t restricted to just his scrambling expertise.

“The things that I was good at as a wrestler I don’t feel like I’m limited to in what I can bring to the table in terms of teaching the guys,” Storniolo said. “Other guys that are more of solid technique or cookie-cutter wrestlers, it’s not something we try to force onto them.”

Martin said Storniolo formed bonds easily with the wrestlers and was an all around great technician, especially with his work coaching former NCAA Championships finalist Ryan Williams. Williams, a No. 8 seed in the championships pulled off four consecutive wins before making his way into the finals match.

“When Ryan Williams made the national finals, it was obvious Matt made a big impact on him,” Martin said. “The first year Storny was here, Ryan didn’t do great at the NCAA Tournament. He was hurt, and then Storny spent the whole summer with him and the kid got a lot of confidence, got on a roll and made it to the finals.”

In 2009, Williams defied all odds and made his way to the NCAA finals. Prior to Storniolo’s arrival, Williams finished his sophomore season with a 30-9 record. During his senior year, Storniolo’s last with the program, his record improved to 39-4 with a 22-1 mark in dual matches.

After the NCAA Championships, the blossoming assistant coach attracted the attention of other college coaches. Among those he impressed: Pariano.

“What really caught my eye at Old Dominion was that he worked with Ryan Williams at 141 and got him into the national final,” Pariano said. “When you do something like that — and Matt was an integral part of that — it’s very telling of what you can do with your future. It doesn’t matter that you’re only 23, 24 or 25, which is about the age he was.”

When the Wildcats offered Storniolo a coaching spot, he told Martin that he couldn’t turn down the opportunity to coach in the Big Ten.

Storniolo joined NU as the team’s newest assistant later that year. However, what truly separated him from the experienced Cats’ coaching staff was his age — he was only 25 years old.

After Storniolo hopped onto NU’s coaching staff, he quickly became a mentor for former Cats stars Pierce Harger and Andrew Nadhir. Storniolo was hired the year before Harger enrolled, and was the wrestler’s main contact during his recruiting process.

Harger said although Storniolo worked to establish a close, friendly rapport with his players, he didn’t lose sight of his role as a motivator to help the wrestlers achieve their competitive goals.

“I was in the semis and I was up big on this guy and I ended up losing the match at the last second and after the match he kind of grabbed my stuff off the chair — didn’t let me pick up any of my clothes — and said ‘you’ve got some sprints to do,’” Harger said. “I was gassed after the match and that was kind of his tough love, no give up attitude. I don’t think he’s still ever been as mad as he was that day.”

Storniolo said he goes out of his way to try to relate to the wrestlers. Using his experience as a former collegiate wrestler, he said he understands the difficulty in balancing cutting weight and maintaining grades.

But Storniolo also said his laid-back personality is conducive to getting his point across when he does have to become the disciplinarian.

“I try to be laid back when I feel it’s appropriate but if there’s a time that I need to flip the switch and take on a little more of a fiery personality, I don’t have an issue doing that,” Storniolo said. “It actually means a little bit more when I do flip that switch because the guys know that that’s not my typical demeanor.”

Before Storniolo’s arrival, Nadhir finished his sophomore season with a 14-12 record. After two years of working with the new assistant, Nadhir finished the year 34-8, placed sixth in his weight class at the NCAA Championships and became a first-time All-American.

“It’s one of those things where you are going to always say ‘of course I would have gotten to where I wanted to be because I was going to work hard and bust my butt,’” Nadhir said. “But the bottom line is that Matt stepping in when he did was so huge for me. I got to wrestle with this guy, who would kick the crap out of me every single day and make me better.”

Nadhir said without Storniolo’s help he wouldn’t have been able to contend for a national title. Nadhir wanted to work out with the new coach at every opportunity and said he “begged for (Storniolo’s) time, and he was always available.”

Before Nadhir’s final Ken Kraft Midlands, NU’s annual wrestling tournament, he wanted to get one last workout in with Storniolo. However, his assistant coach was away visiting family for the holidays and his flight back had been delayed. Nadhir, who had already gotten back to campus, called his coach and asked him to come work out with him.

Storniolo took a cab straight from the airport to the wrestling room, where the two battled with each other starting at 8 p.m. and ending late in the night.

Storniolo took over for Pariano on short notice and had to prepare an injury-riddled team for one of the toughest seasons in school history.

During the 2015-16 season, the team lost two of its standout redshirt-freshmen in Bryce Brill and Johnny Sebastian after they both underwent season-ending surgeries. Additionally, back-to-back conference champion Jason Tsirtsis was dealing with family matters.

“It was a bit of a whirlwind at the beginning,” Storniolo said. “Nobody was really prepared for the situation we found ourselves in at the end of last October. It was an uphill battle all year. It seemed like anything that could’ve went wrong did go wrong.”

“We’ve had a lot of success here over the last seven years and I along with the other coaches on the staff have our fingerprints on that success,” Storniolo said. “It’s not like we came into year one and things fell apart and that’s indicative of the staff we have here or the guys on the team.”

It isn’t common for a then-31-year-old coach to take over a major program. Storniolo is the youngest coach in the Big Ten and even his college coach was surprised by Storniolo’s quick rise up the coaching ladder.

Spates said he was amazed that his former wrestler already has a position as a head coach in a major conference. And even though the team only recorded two wins this year, Spates said he is confident that Storniolo will be able to turn the program around.

“It’s kind of surprising, it’s not easy to land a head Division I coaching position and that’s a tribute to him,” Spates said. “ And to have the adversity he had this year and yet have an administration that can see past that — that shows they have a lot of confidence in the person and so do I. If I could buy stock in Matt Storniolo, I would do it.”

Storniolo said will spend the offseason rebuilding the team and working in the new recruits to the program. He said having this season out of the way is a tremendous relief.

And now that the season is over, the fresh-faced coach said he never would have anticipated his swift rise to the top of a Big Ten program.

“I thought that there was a chance I’d be in a head coaching position by this time, but to be perfectly honest, no, I didn’t think it would be in a Big Ten institution,” Storniolo said. “But I’m not complaining about that.”