The Sideline: No matter what, Drew Pariano tells it like it is 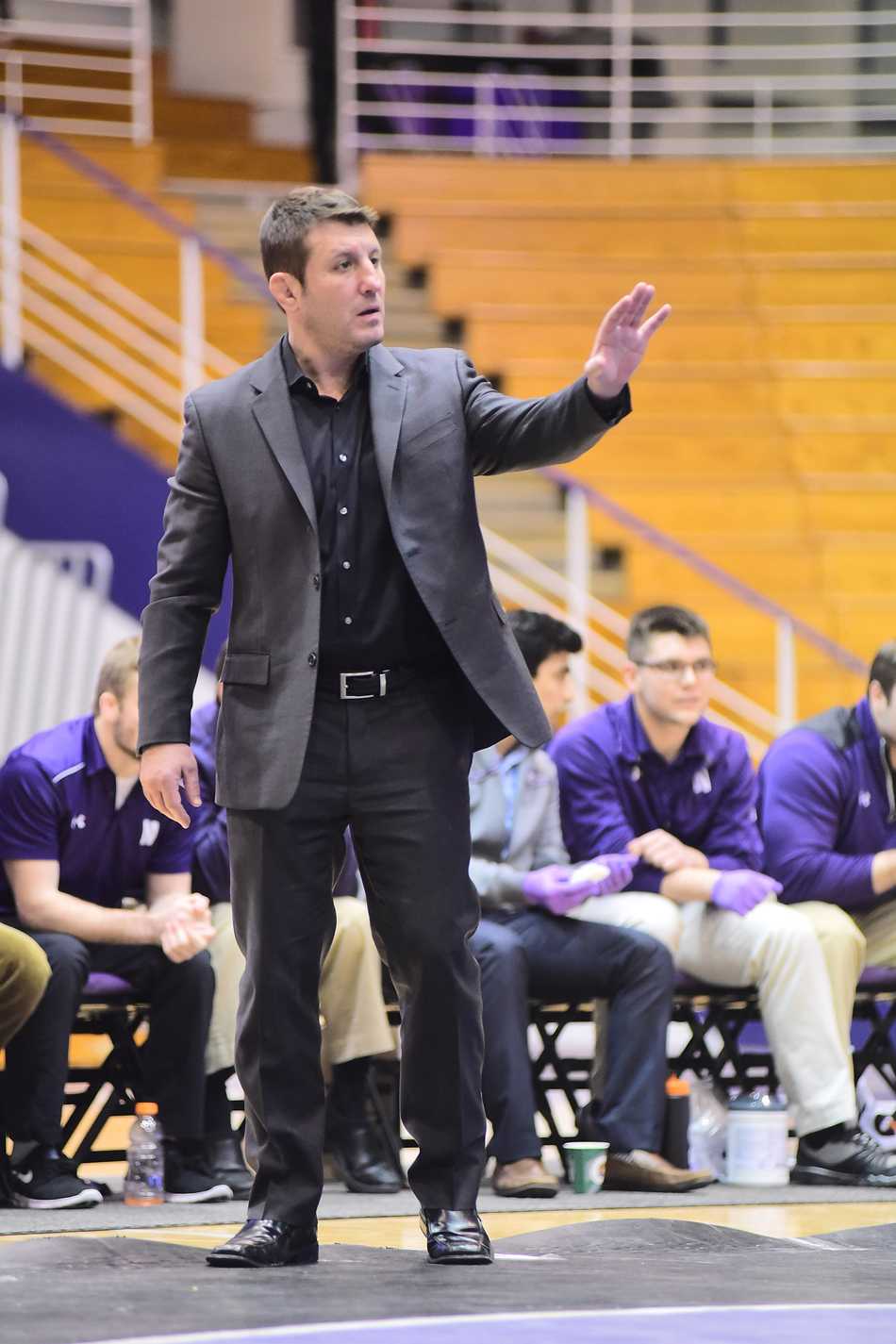 Drew Pariano dictates the action. Northwestern’s coach is not one to beat around the bush, as he takes a blunt approach when instructing his wrestlers.

“I’d be extremely dangerous at pretty much any other Big Ten school,” he said. “I’m good at recruiting.”

After all, Pariano is working with a smaller roster, fewer resources and higher academic standards than any other team in the conference.

But that hasn’t stopped him from building one of the nation’s top programs. In his 10 years at Northwestern — five as head coach — Pariano has taken three wrestlers to NCAA Championships and 11 to All-American bids. He has led the Wildcats to perennial national contender status.

And how has he found such success so early in his career?

By eating, sleeping and breathing wrestling.

Yes, the only thing worse for Pariano than “stupid vampire shows” is losing. He says he likes winning more than life itself.

In turn, the success he has had is not enough. It will never be enough. Sure, the Cats have cracked the top 15 fairly regularly over his tenure and the top 10 a couple of times, but Pariano’s goal is to turn NU into a permanent top four team.

Because at the end of the day, the only thing that defines Pariano more than being a wrestling coach is being a Cat.

Pariano, 38, hasn’t only been a successful coach at NU. As an undergraduate, he was also one of the team’s top wrestlers.

Over his career, Pariano was a three-time NCAA qualifier, four-year starter and Academic All-American.

Even so, Pariano said that as an undergrad, he always felt he’d be a better coach than he was a wrestler. He thought he could see technical aspects his teammates could not and could impart his knowledge on other wrestlers.

After graduating with a degree in learning and organizational change in 2000, Pariano went to graduate school at John Carroll University, where he became the wrestling team’s assistant coach. But because the head coach also led the football team, Pariano more or less ran the wrestling program himself at just 23 years old.

“I was so young that I could pretty much beat anybody in that practice room,” he said. “So there was a level of respect there.”

Pariano next moved on to the head coaching job at Cornell College, skipping his graduation to interview for the job.

He coached the team only two years, but his impact was monumental.

“When I got there, I really feel like it was the worst wrestling program in the country,” Pariano said. “I had to rebuild that program from scratch, and now they’ve had like 30-something All-Americans since I left.”

In that rebuilding process, Pariano used one of the best resources at his disposal: Tim Cysewski, the 20-year head coach at NU.

He called his former coach regularly, using him as a sounding board for how to build a program.

When the assistant job opened up in 2005, Pariano suggested potential candidates for the spot to Cysewski. He did not initially display interest in the position himself, but eventually, they both realized he might actually be the right fit.

“I was gone five years,” he said, “and I felt like in some ways nothing changed. But in other ways, everything changed.”

Pariano’s mentor, though, was close to retirement after 20 years of coaching. Luckily, Cysewski found the perfect fit to take over the team.

“Ninety-nine point nine percent of the guys who come to Northwestern for any sport don’t get into coaching,” Cysewski said. “But here was a guy who went down kind of the path I went down coming out of college, and had the passion for the sport and the detail for it. Things just clicked, and the rest is history.”

One of a kind

“Most coaches can’t believe the stuff that comes out of my mouth,” he said. “I like to keep them guessing. I like them to not really know what I’m thinking all the time.”

For starters, you won’t find any other coach who’s more straightforward than Pariano. He isn’t looking to make a ra-ra speech; he knows his wrestlers are too smart for that. Instead, he’s always extremely candid and realistic.

When a wrestler isn’t performing, he tells him what needs to change.

When he talks with the media, he holds nothing back.

But there’s another side to that coin.

“I’m all over (my wrestlers),” he said. “I got emails that two guys should probably be doing better in classes, and I brought them in and said ‘I expect A’s and B’s in these classes.’”

He’s aware that most of his athletes won’t make a career out of wrestling, and he’s OK with that. But at the same time, he wants them to leave knowing they can reach any height after the grind that is NU wrestling.

In turn, he demands a lot out of his wrestlers, both on the mat and in the classroom. With his wrestlers only having four or five years at the university, Pariano expects absolutely everything out of them.

“In wrestling, there’s a saying ‘Once you wrestle, everything in life is easy,’” 2011 graduate Andrew Nadhir said. “I would say once I wrestled at Northwestern, at this point, I don’t feel like there’s any challenge I can’t accomplish.”

Nadhir said Pariano was instrumental in shaping his success both in and after college. He recently started his own mobile gaming company, Purple Gator, and said there’s no way he would have had the guts to do that had Pariano not pushed him to always strive for the best.

At NU, Nadhir joined the team as a walk-on, and Pariano said he was probably 1,000th in his recruiting class. Four years later, he left as an All-American and defeated the nation’s No. 1 recruit along the way.

“I came in not a very good student and not a very good wrestler,” he said. “And I left school with over a 3.0 GPA, and as an All-American and an Academic All-American. Drew played a huge role in that in terms of preparing me and letting me know that you can’t struggle in the classroom and then come to the mat and think you’re going to perform.”

Equally important is the personal time Pariano spends with each of his wrestlers. Nadhir said Pariano prepared him both physically and mentally, spending time with him every day, one-on-one, both practicing on the mat and talking in his office.

Pariano said his philosophy is that each wrestler is unique and needs something different. But no matter the circumstances, Pariano is there for them.

“He gives a s—, you know,” Welch said. “Like he cares so much. He cares to the point where, to see me in pain or not achieve a goal, or to lose a match that I really wanted, is probably more painful for him than it ever was for me.”

In his freshman year, Welch had one goal: become an All-American. When he fell short, he was distraught. But Pariano sat Welch down in his office and promised him he would never feel that way again.

He kept that promise. Welch was an All-American each succeeding year.

Still, Pariano’s intensity has its drawbacks. He said he’s not very pleasant when the team loses and that he sometimes can care too much.

“I don’t eat for like three days straight at NCAAs,” he said. “My stomach is in such big knots. I want to do the worrying for the guys, and I want them not to worry. We put down so much coffee at the NCAAs it’s ridiculous. We keep Starbucks and Dunkin’ Donuts in business in NCAAville.”

All the agony and heartbreak is worth it, though, for the reward of coaching is incomprehensible.

“Watching the guy walk off the mat as an NCAA champ,” Pariano said, “I can’t even describe it. It’s the best feeling in the world.”

Pariano’s biggest strength as a coach comes from his duality. He exudes strength not only in development, but also in recruiting.

“There might be some other coaches out there that on a resume might have won a few more tournaments than Drew has,” Cysewski said, “but one thing Drew has, he knows how to recruit. He knows how to get things done that way, and he will not be out-worked, that’s for sure.”

Under Cysewski, Pariano took up a lot of the recruiting reins. Today, it still remains his top priority.

Pariano said he thinks Northwestern helps sell itself in a lot of ways — after all, it’s the strongest academic school in the Big Ten, it’s just outside of Chicago, has access to internships — but at the same time, it has its drawbacks. There’s a much more rigorous academic experience, an inferior wrestling room and a significantly higher tuition (which is still more than $30,000 if Pariano offers a 50 percent scholarship).

His strategy for recruiting, consequently, is the same as his coaching strategy — honesty. He tells prospective students school won’t be a cakewalk, but that they’ll come out much stronger on the other end for job opportunities.

Then, of course, his track record speaks for itself. He develops multiple All-Americans every year — including one who started as a walk on — and has produced three NCAA Champions.

Even so, Pariano cares that his wrestlers are making the best decisions for themselves. He’s not looking to exploit an overly eager recruit.

“I was here for an unofficial visit and I was ready to commit verbally,” Welch said. “Drew told me not to. He said he wanted me to take more time, really think about it and talk to my parents. That was something I really respect looking back, to gain my trust. Some other coaches would maybe jump on that, whereas he told me to sit on it for a while, take my time and get back to him.”

Looking back and looking forward

Pariano remembers being a 10-year-old in a hotel lobby in Denver where he saw businessmen standing around talking.

He turned to his parents and said, “I never want to do that.”

He clarified, “Be fake.”

Pariano’s favorite part of his job is how unpredictable it is. Even when he thinks his day is scripted, something unexpected will happen.

Yet he knows it won’t last forever. Just like Cysewski, Pariano figures he’ll move on after 15 or 20 years. By that point, he’ll want somebody younger who’s more in tune with the athletes and more physically able to keep up with them.

“I think there’s a shelf life to everything,” he said. “I don’t like coaches that overstay their welcome.”

But in the remaining time he has, he plans to turn NU into the best program possible.

“You don’t get to go up on the stage and claim your ninth place trophy,” he said. “There isn’t one. We want to be the best.”