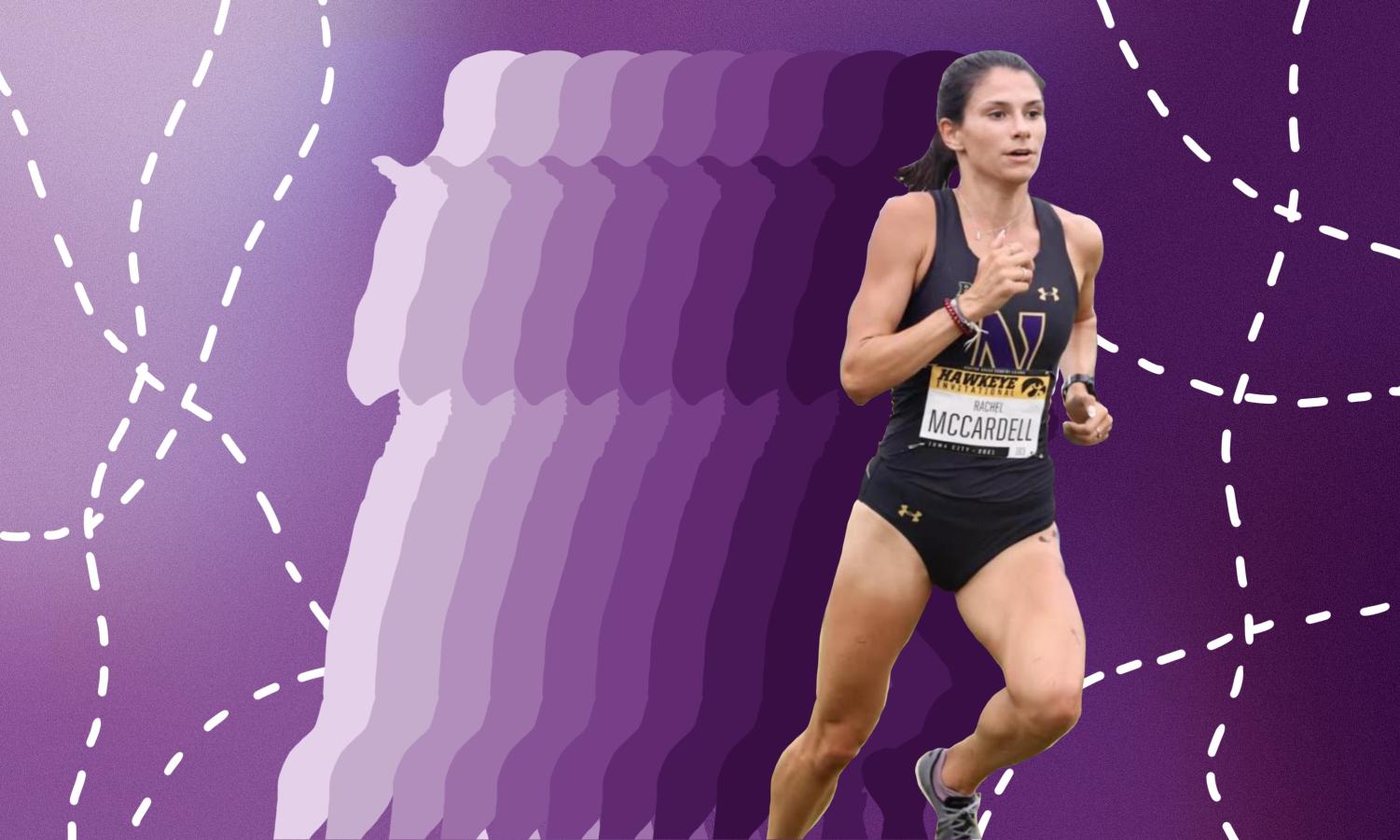 Leading the team to its first appearance at NCAA Division I National Championships in 20 years, fifth-year Rachel McCardell is rewriting the history books for Northwestern cross country. (Graphic by Olivia Abeyta)

Leading the team to its first appearance at NCAA Division I National Championships in 20 years, fifth-year Rachel McCardell is rewriting the history books for Northwestern cross country.

When graduate student Rachel McCardell was an underclassman, Northwestern cross country routinely finished in the bottom half of the Big Ten and the Midwest Region. Qualifying for NCAA Division I National Championships seemed like a far-off dream, she said.

But that changed when Jill Miller became head coach in 2019, setting the Wildcats on a new path.

McCardell said the team used to feel NU’s academic demands limited its athletic potential, but Miller challenged the team to expand its vision of success both on the course and in the classroom.

“The foundation for her was (believing) that she could be an excellent student and an excellent athlete,” Miller said. “We really worked on rewiring that to say excellence is something that can be pervasive in all areas. I feel like she grew tremendously in terms of belief in herself.”

Since Miller’s arrival, McCardell has become one of the best runners in NU’s history and led the program to its strongest season in decades. The Michigan native individually qualified for the NCAA Championship in 2021 and this year helped the team punch its first ticket to the big dance in 20 years.

After finishing 65th at NCAA Midwest Regionals her freshman year, McCardell climbed the ranks to place third in 2021, the highest-ever regional finish for an NU runner. She has improved her 6k time by more than three minutes over her collegiate career, continuing to progress this year with a personal record of 20:11 at the Bradley Pink Classic.

Beyond the cross country course, McCardell is a campus tour guide and a member of Extreme Measures a cappella group. She is an Academic All-American, Academic All-Big Ten and Big Ten Distinguished Scholar.

Miller’s encouragement of both athletic and academic goals has paid off for McCardell and her teammates over the course of four seasons. NU is one of two top ten academic institutions to qualify for NCAA Division I Championships this year, along with Stanford.

A place in the history books

Just three seasons ago, NU finished 13th at both the Midwest Regional Championships and Big Ten Championships. In a dramatic improvement, the Cats took fifth at Big Ten’s and second at Regionals this year, their best finishes since 1986 and 2002, respectively.

McCardell said she decided to stay with the program for a fifth year to write this kind of history. While she qualified for NCAA Championships as an individual last season, team qualification was still on the table as an unfinished project, she said.

Verbeke agreed that she felt the program was so close to achieving its goals after her senior season.

“Coming back to be a part of that and to achieve that with the team is kind of a memory and a goal that I wouldn’t want to miss out on,” Verbeke said.

Miller said these graduate students’ experience with the program is invaluable for younger members of the team, and has helped created “meaningful change” in the program.

In a sport like running, which can at times seem individualistic, McCardell’s dedication to the team and its goals has been steadfast.

Verbeke said McCardell has been a “pillar and a rock” for the team over the past five years.

“What a lot of people don’t see is all the behind the scenes, how much hard work she puts in every single day,” Verbeke said. “All the while still being the most supportive teammate and bought into the entire team’s goals.”

McCardell’s individual qualification for the 2021 NCAA Division I Championships was the first appearance by an NU runner at Nationals since All-American Aubrey Roberts in 2018. At Nationals, McCardell placed 82nd in a field of more than 250 runners.

While McCardell said competing at the season’s biggest meet was an incredible experience, she missed having her teammates by her side.

“Trying to head in with the team is just so much more exciting,” McCardell said. “There’s an extra element of motivation when you’re running for your teammates, and I think I missed that without them there.”

The Cats had their sights set on Nationals entering 2022. Kicking off the season ranked fourth in the Midwest region, they kept their heads down and held steady. In October, NU moved into second in the regional rankings and came in at No. 29 in the national poll — its  first national ranking since 2002.

With its second place Regionals finish, NU will return to the big dance for the first time in decades. McCardell called the achievement a “a validation of all the hard work put into this program.”

By doing so, they fulfill a vision Miller outlined seasons ago and McCardell held in sight over the progression of her career.

“Qualifying to Nationals as the goal felt so personal and we hadn’t done it yet,” McCardell said. “So I felt like, ‘How could I leave?’ We still had some unfinished business in the Big Ten and the NCAA. And I wanted to come back and see that through.”