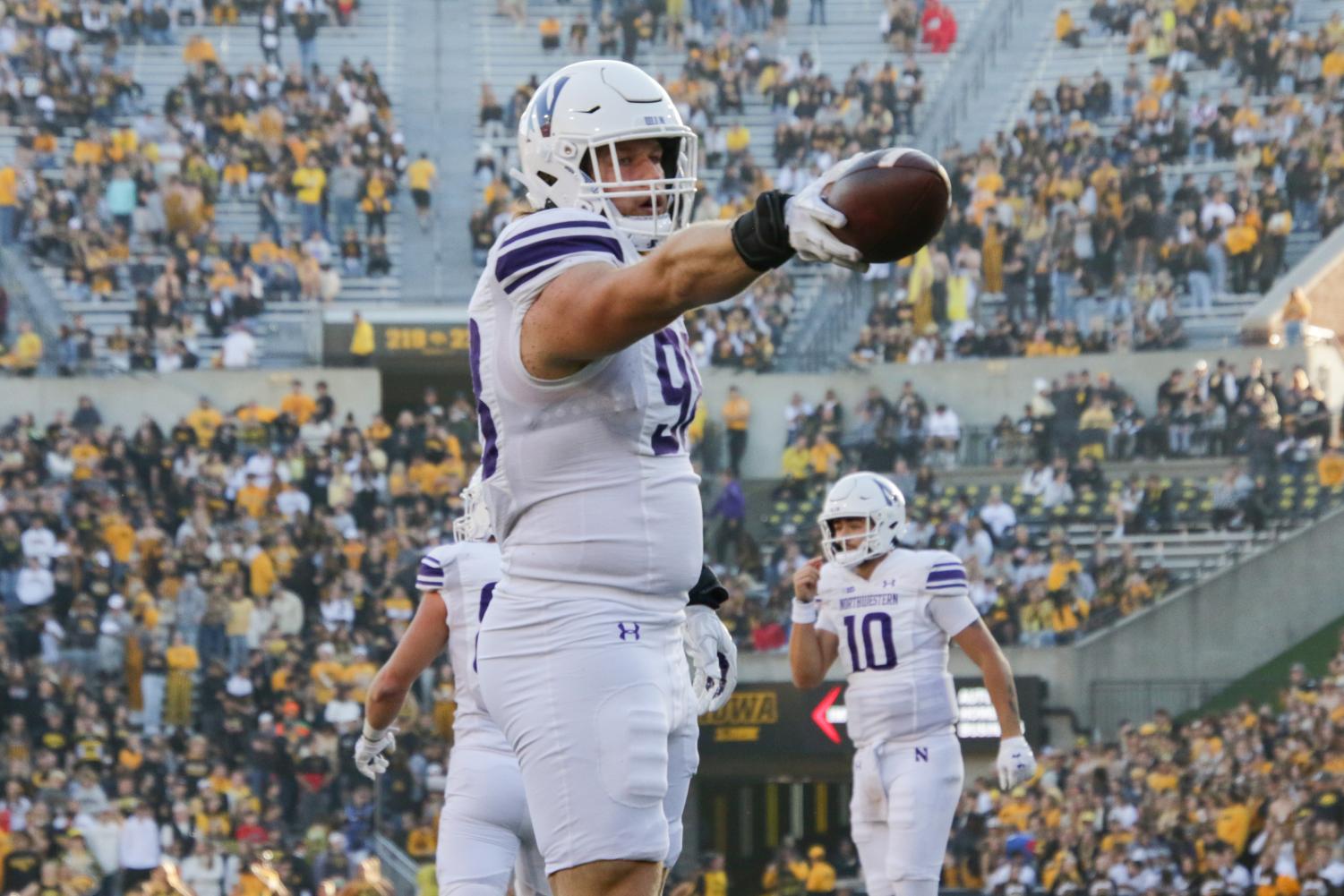 Junior tight end Duke Olges celebrates a catch against Iowa. Olges has made the transition from the defensive line to the tight end group this season. (Angeli Mittal/Daily Senior Staffer)

Junior tight end Duke Olges celebrates a catch against Iowa. Olges has made the transition from the defensive line to the tight end group this season.

Football: From the trenches to the end zone: Duke Olges emerges as tight end threat

Facing 4th-and-goal from the Iowa 1 with the Hawkeyes up 20-0 in the third quarter, offensive coordinator Mike Bajakian placed his trust in his secret weapon and called for a pass to No. 98 — converted defensive lineman Duke Olges. Sullivan faked a handoff, rolled to his right and connected with Olges for six points to silence the Kinnick Stadium crowd and get the Wildcats on the board.

“I was pretty fired up to see the signal come in,” Olges said in a Monday press conference. “It was a great call by Coach Jake, so I was excited to finally get that play that we’ve executed a lot in practice out in the game.”

Olges’ touchdown was one of few highlights in NU’s 33-13 blowout loss to the Hawkeyes, the Cats’ seventh straight loss of the season. Look to the end zone or the sidelines erupting in celebration, though, and it was clear that this garbage time score was more special than the scoreboard suggested for NU. The play marked the culmination of an unlikely transition for the Wilmette native from the bottom of the defensive line depth chart to a role in the Cats’ passing game and a sliver of Big Ten glory.

Olges played high school ball just north of Evanston at nearby New Trier, lining up on the defense and, occasionally, at tight end. But Olges said he honed his unusual combination of power and athleticism even earlier, playing multiple sports growing up and starring on the baseball diamond.

When Olges committed to NU as a three-star prospect in 2018, he planned to play exclusively on the defensive line. In his first three years, he rarely saw the field and couldn’t work his way up the depth chart.

This offseason, coach Pat Fitzgerald made Olges an unexpected offer: Transition to tight end, where he could use his physicality and 6-foot-4, 260-pound frame to contribute as a blocker and his athleticism to factor into the passing attack.

Olges’ teammates and coaches also embraced the opportunity. Graduate tight end Charlie Mangieri, the senior member of the tight end group and one of the offense’s most respected leaders, taught Olges the nuances of the position despite his own struggles with injury. That education helped Olges nail down less intuitive aspects of playing tight end, such as footwork, Bajakian’s offensive scheme and route running.

According to junior tight end Marshall Lang, Olges’ talent was apparent early on, but his learning process was gradual.

“He came in and was a little top-heavy and not the most fundamentally sound guy, but it only took him a couple weeks and he got it down like that,” Lang said. “So quick and easy, now it’s just second nature to him.”

Over the course of the season, Olges finally made the progress he’d long hoped for as a member of the defensive line room. After the Cats’ loss to Southern Illinois, the coaches started to mix the junior into the tight end rotation, though primarily as a run blocker. The physicality that made Olges a top recruit at defensive line translated well to the offensive side of the ball, but his impact on the passing attack didn’t show up on the stat sheet.

Last Saturday against Iowa, one of the teams that recruited him coming out of high school, Olges finally had the opportunity to expand beyond his blocking responsibilities. After a poorly executed Iowa punt in the third quarter gave NU possession in Hawkeye territory, Sullivan and the Cats sparked the drive with a 14-yard pass to Olges — his first career reception. Six plays later, the Sullivan-to-Olges connection produced the local’s first college touchdown and cut the deficit to 13 points.

Though Fitzgerald said after the defeat that there were no positive takeaways from the game, he gave Olges the honor of offensive player of the game in his Monday press conference.

“Offensively, Duke Olges had a great game,” Fitzgerald said. “He was really physical at the point of attack and had his first career touchdown, which was great to see.”

Olges isn’t the only NU player to make the transition from the Cats’ defense to offense: Defensive back Coco Azema rushed for 123 yards in a 2019 game against Illinois and defensive lineman Joe Spivak became a regular in NU’s Jumbo package last year. Of all of the armband slaps, hugs and congratulations Olges received, a text from Spivak, his former teammate on the defensive line and a WWE wrestler, resonated most deeply.

In the text, Spivak sent something only Olges could truly appreciate — the offensive play coaches designed for Spivak when he made his appearance on the offense.

“He texted me exactly the play they had in for him when they were moving him to the Jumbo package,” Olges said. “Joe is a guy I looked up to on the defensive side of the ball…it’s a credit to him to have some of that rub off on me.”

— Football: What to Watch For: In ultimate David vs. Goliath, Northwestern hosts No. 2 Ohio State