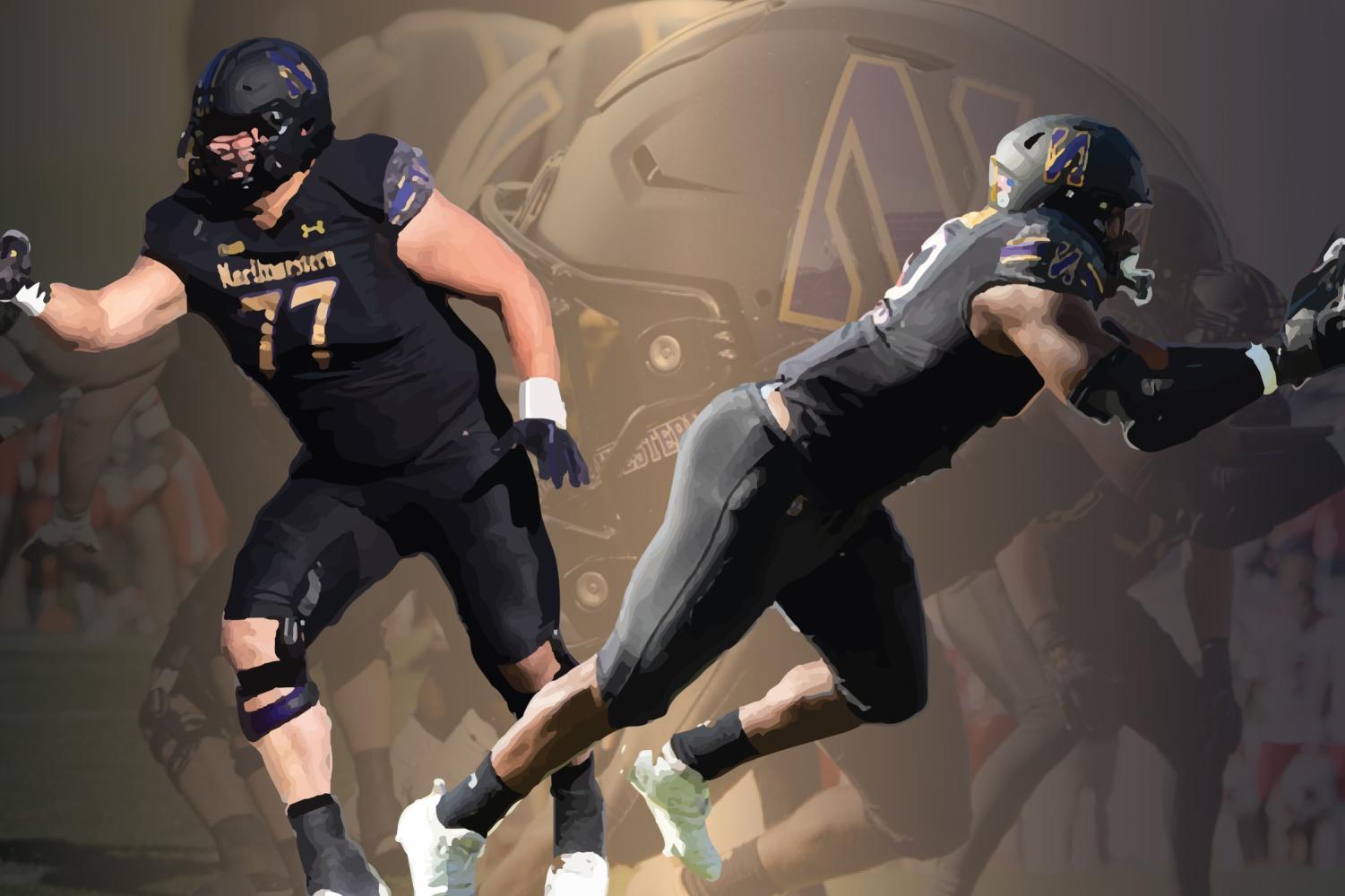 Junior left tackle Peter Skoronski and senior defensive lineman Adetomiwa Adebawore. Along with taking over games, the two captains are the catalysts of a change in Northwestern’s team culture.

Northwestern Director of Football Performance Jay Hooten needed someone to change the Wildcats’ culture in the weight room, but he knew the driving force couldn’t be a coach.

NU had just completed a disappointing 2021 season in which the Cats limped their way to a 3-9 record and lost to in-state rival Illinois for the first time since 2014. The physical separation of the pandemic had taken its toll on NU’s culture.

In January 2022, Hooten received a call from then-junior defensive lineman Adetomiwa Adebawore with a simple question: “What do we need to do?” The two began talking daily about how to restore the Cats’ winning ways, and Adebawore, along with then-sophomore offensive tackle Peter Skoronski, embraced the challenge of turning around the team’s attitude.

“Adebawore changed our culture this offseason,” Hooten said. “He helped rebuild our culture, and he was the catalyst behind it, and then Peter followed him. They have been unbelievable. It’s been less about sets and reps and more about the culture of the team.”

In 2022, Adebawore and Skoronski have become more than just NU’s best players — they have formed a crucial part of the program’s identity and set the tone in the trenches. Both made immediate contributions to the Cats early in their college careers, but as captains and leaders in the weight room, their influence has extended beyond their own play this season.

At the heart of that bond is their shared competitive fire and respect for each other’s games.

When Skoronski joined the Cats in 2020 from Chicago suburb Park Ridge as a four-star offensive line prospect and NU’s fourth-highest signee of all-time, the coaches and fanbase had high expectations for how he could contribute to the program. Facing Adebawore, a sophomore with eight games of college football under his belt, was a major shock to his system.

“He probably put me on my butt my first day of practice,” Skoronski said. “I was like, ‘Oh, this is how it is, you’ve got to be ready.’ It’s great to have someone like that in practice, and to not have to go up against in a game.”

Both players blossomed into key contributors for NU in 2020, when the Cats won the Big Ten West for the second time in three seasons and recorded their first top-10 finish in the AP Top 25 since 1995. When future NFL All-Pro Rashawn Slater opted out of playing in 2020 to prepare for the draft, Skoronski stepped in as a true first-year and exceeded all expectations, earning a selection to the All-Big Ten Second Team. Adebawore also shined in his time on the field, registering six tackles for a loss and two sacks in nine games.

For opposing defensive linemen, Skoronski proved a nearly impossible matchup due to his consistency and impeccable form.

“He’s smart, has great technique, he’s very patient and stays disciplined through every rep,” Adebawore said. “He doesn’t change who he is, (and) he’s really consistent as a player.”

For Skoronski’s defensive counterpart, deception and explosiveness paved the way for a breakout season. Standing at 6-foot-2 and 280 pounds — relatively undersized for a top defensive lineman — Adebawore disrupted opposing offenses with his rare combination of speed and power.

“It’s the optical illusion — you think ‘Here’s a guy I can snatch him up and use my body,’ and the reality is he can keep his distance while being explosive and being athletic and being shifty,” offensive line coach Kurt Anderson said. “He’s very slippery when you’re trying to block him.”

The following year, both linemen continued their ascent and received All-Big Ten honors, Skoronski on the coaches’ All-Big Ten First Team and Adebawore on the All-Big Ten honorable mention list. But with the Cats free-falling from a 7-2 record to 3-9 in 2021, both players entered the offseason motivated to return NU to contender status in the Big Ten West.

The Cats’ coaches view the months from February to July as the crucial time to build the foundation for a successful season and build momentum heading into preseason camp in August. This offseason, Adebawore and Skoronski sought out a challenge that could elevate their established games even further: facing each other.

According to coaches — and Adebawore and Skoronski themselves — each player has won his share of the on-field battles through the spring and summer camps. Skoronski remembers one play in practice in which Adebawore dropped into coverage, intercepted a pass and ran it back for a touchdown, which made even the offensive linemen marvel.

“I try to go hard whoever I go against, but especially with Peter, you’re not going to have a choice to not go hard,” Adebawore said. “I’m really focused on trying to go against the best every day, and with him, that definitely helps.”

The friendly competition has followed Adebawore and Skoronski into the weight room. Adebawore’s strength numbers have become the stuff of legend, earning him the No. 30 spot on college football insider Bruce Feldman’s College football Freaks List, with max lifts of 410 pounds on the bench press and 685 on squats this offseason. Skoronski’s own progression has made him a clear candidate to follow Slater into the NFL Draft’s first round.

Still, what impressed Hooten most about both players’ approach this offseason was how they approached their weaknesses.

NU’s coaches wanted Adebawore to become an every-down type of player and increase his number of plays per game from 40 to 60, so the Kansas City product worked tirelessly on his conditioning to complement his off-the-charts power. Hooten said Skoronski developed a Slater-like “grit factor” over the offseason and made massive strides in his strength, improving his bench press by 80 pounds and squat by 120 pounds.

“Both guys also have freakazoid strength numbers,” head coach Pat Fitzgerald said. “Just to watch both of their maturations athletically, competitively, fundamentally on the field — both have really pushed each other, which has been fun to watch.”

Adebawore and Skoronski’s commitment to improving themselves and their team made them natural fits to be among the Cats’ five captains for 2022. For most of their careers in Evanston, both players have preferred to let their play do the talking, but coaches say they’ve noticed both emerging as more vocal leaders this season.

“When your leaders are your best players, guys will immediately look to see what their tempo is, what their attitude is, what their approach to the daily grind is,” Anderson said. “Now they’re using their voice, voicing their opinions, their thoughts, their mindset.”

Therein lies the most difficult challenge each player faces: bringing their teammates with them.

Skoronski leads all collegiate offensive linemen in Pro Football Focus’s pass-blocking grade metric and made the site’s Midseason All-America Team, while Adebawore’s athleticism has helped him gain traction as a potential first-round pick. Still, the goal that fueled the players’ offseason grind — team success and a return to the Big Ten Championship — has eluded the Cats so far.

After edging out Nebraska 31-28 in the season opener, NU has lost five straight games, including all four of its home games. The Cats are in danger of finishing at the bottom of the conference for a second straight year, with ranked squads in No. 2 Ohio State and No. 18 Illinois still ahead.

“Things aren’t going the way that we want them to go right now, and they’re doing an unbelievable job of keeping that culture,” Hooten said. “That’s the number one thing, and they’re the catalyst for that.”