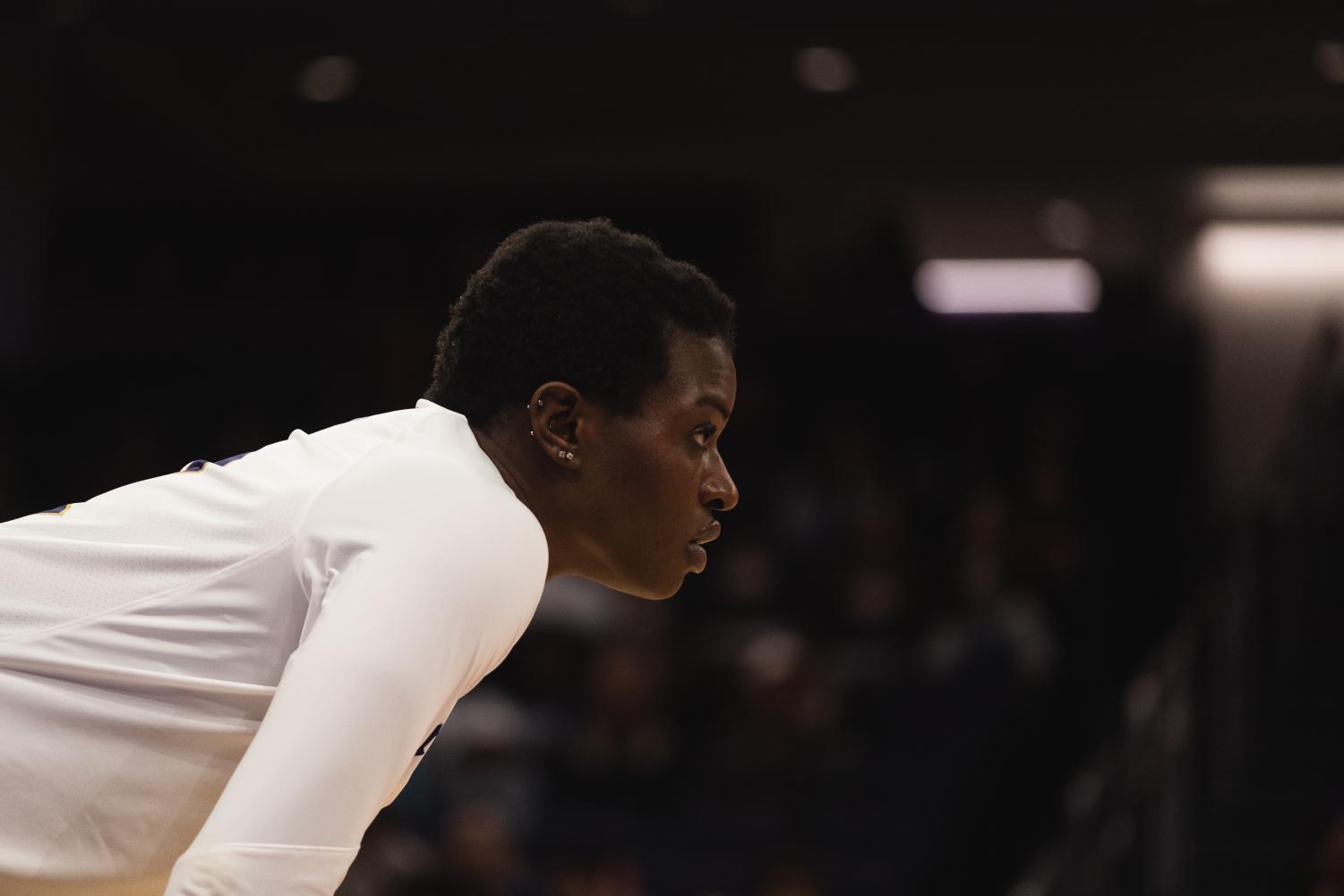 Temi Thomas-Ailara. The senior outside hitter is having a standout senior year for Northwestern. (Seeger Gray/Daily Senior Staffer)

Temi Thomas-Ailara. The senior outside hitter is having a standout senior year for Northwestern.

Senior outside hitter Temi Thomas-Ailara is a force on the court.

One second she’s floating, arm extended overhead as she readies for a powerful, graceful kill. The next she’s running, eyes on the ball as she readies to assist her teammates. Then she’s gently tipping the ball over the net, perplexing opponents with her placement.

The program’s season leader in kills and points, Thomas-Ailara has emerged as a focal point on a Wildcats team in the midst of a renaissance. NU is lighting up the court, recording its best 12-game start since 2012 and recording two upset, ranked victories over then-No. 24 Pepperdine and then-No. 7 Minnesota. Quiet off the court and dynamic on it, Thomas-Ailara is helping pave the way for an NU season for the ages.

“Our freshmen have been pushing us to get better and really earn our spots,” Thomas-Ailara said. “The coaches can change it at any time. Every day in the gym, we have to work hard and prove ourselves.”

The makings of Thomas-Ailara’s stellar season began off the court. After tearing her lateral meniscus during the 2021 season, she was stuck on the sidelines for five months.

Sitting out at practice in early 2022, Thomas-Ailara kept an eye on her teammates. She noticed significant improvements, including sharper passing, serving and defense.

Thomas-Ailara was already driven to return to the court healthy as soon as possible, but witnessing her teammates’ growth ignited a new fervor.

“That motivated me to start working harder,” Thomas-Ailara said. “I was like, ‘We really do have a chance at being a lot better this upcoming season.’”

Slowly, Thomas-Ailara gained strength. She worked with NU’s trainers every day and was eventually able to hit the court again in June. Easing her way back into volleyball, Thomas-Ailara hit as much as she safely could throughout the month. By July, she was serving again. In August, she was fully ready to compete — just in time for the season.

The injury brought new resiliency, too. Sitting out during the off-season was difficult, but Thomas-Ailara said it made her appreciate the game more.

“Emotionally, I’m stronger on the court,” Thomas-Ailara said. “I can give more to my team now, which I feel like I wasn’t able to do in the past.”

This emphasis on emotional and physical wellbeing has remained well after recovery. Coach Shane Davis said Thomas-Ailara has been proactive about working with the team’s trainer, even when she leaves practice early. Her care for her own well-being has set the example for the rest of the team, he said.

Davis said Thomas-Ailara is seeing the dividends of her hard work paying off now.

“She’s like a whole new Temi,” Davis said. “(For) athletes, sometimes things just click and you see a bit of a change. That was the point for Temi: going through an injury like that and being able to pull through and have success.”

Thomas-Ailara dove into sports as a child, trying everything from cross country to basketball to soccer. She and her family knew little about volleyball before she started playing.

By her freshman year of high school, she chose to focus solely on volleyball. Though it was partly because of the time-consuming nature of high school and club volleyball, Thomas-Ailara also attributed it to the community she found.

“The people I had around me, growing up and playing club volleyball, turned out to be my best friends even now,” Thomas-Ailara said. “It was the people that made me fall in love with the sport.”

Thomas-Ailara was a head-turner from a young age. Her former high school and club coach Ryan Summers recalled asking a college coach to stop by and watch her play when she was in seventh grade. Even then, the college coach said he would be interested in Thomas-Ailara as soon as she began the recruitment process.

By the time Thomas-Ailara was in high school, Summers said college coaches were constantly dropping by practice to see her play. Opposing coaches would come up to him post-game solely to talk up her play.

When Davis first saw Thomas-Ailara play during her freshman year of high school, he said he thought, “‘Wow, what a super-athlete.’”

He spent time with Thomas-Ailara and her family over the following years, getting to know them. Thomas-Ailara was set on attending a school with good academics. Between NU’s offerings and the connection with Davis, her decision became clear.

As Glenwood residents, Thomas-Ailara’s family is often able to make her matches.

The daughter of Nigerian immigrants, Thomas-Ailara’s heritage has been central to her life. Her parents arrived in the U.S. in 1996 and had Thomas-Ailara and her brother a few years later.

Throughout her childhood, Thomas-Ailara said her parents would remind her that they immigrated to create more opportunities for her and her brother, which has kept her motivated and pushed her to do more.

When Thomas-Ailara visits home, Omolaja said they often go to Nigerian parties, activities and church together. Cooking is also an important part of her family relationships, as they frequently eat Nigerian food at home.

As volleyball has become a significant part of Thomas-Ailara’s life, family members have embraced it, too. She said her family sometimes calls her and asks if she watched a certain game or if she has thoughts on how other Big Ten teams are playing.

Starring off the court

There’s no doubt Thomas-Ailara makes an impact on the court. But, for those who know Thomas-Ailara, the person she is off the court far outshines her accomplishments.

When Summers first met Thomas-Ailara in middle school, he said it wasn’t her height or play that made her stand out. It was her quiet, kind nature.

He recalled when Thomas-Ailara’s high school team voted on team awards during her junior year. He said there was only one other player who stood a chance to win the most valuable player title over Thomas-Ailara. When he was looking through ballots, he noticed that Thomas-Ailara had voted for her teammate, not herself.

“She was smart enough to know that this was the only girl who could potentially beat her, and she voted for her anyway because she wanted to give the girl her props,” Summers said. “That is indicative of who she is as a person.”

— Volleyball: Wildcats aim to take down No. 4 Wisconsin in homestand battle at Welsh-Ryan Arena