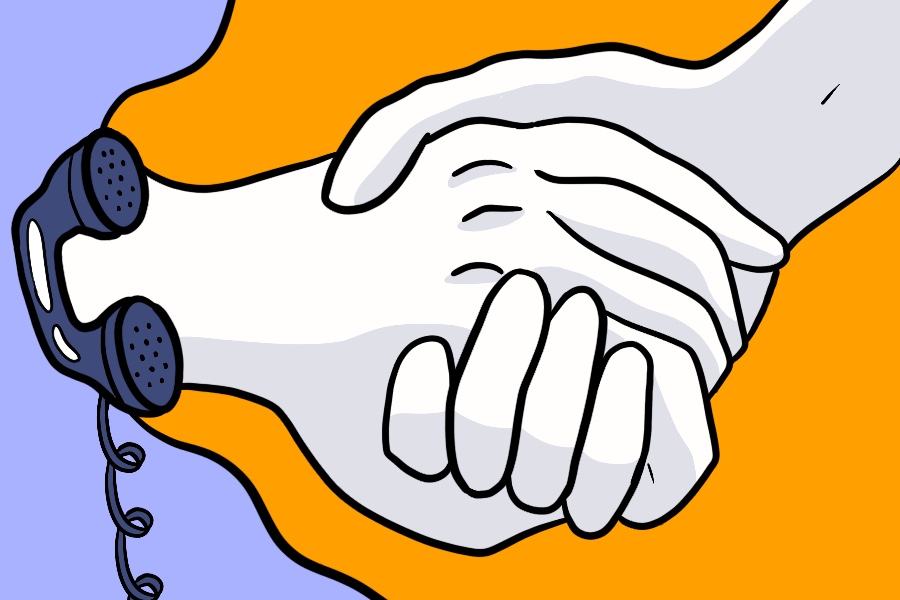 About ten years after Skokie’s Living Room opened, Evanston will soon have a free walk-in mental health crisis center of its own. (Illustration by Olivia Abeyta)

About ten years after Skokie’s Living Room opened, Evanston will soon have a free walk-in mental health crisis center of its own.

When a guest walks into the mental health crisis center on Skokie Boulevard, they’re greeted with warm orange couches, plants and paintings of koi fish — a far cry from sterile hospitals.

Instead of a doctor, a recovery support specialist welcomes the guest. Specialists, who have lived experience with mental illness, often share personal knowledge and coping strategies.

“We want it to be a warm, inviting space for someone who is in crisis,” Noy Frial-Lopez, the chief clinical officer of Turning Point Behavioral Health Care Center, said.

That’s why the center is called the Living Room at Turning Point. For about 10 years, the space has provided an alternative to the emergency room for adults in mental health crises.

The Living Room in Skokie prevents most guests from going to the hospital. In the 2021 fiscal year, 99.5% of Living Room guests avoided hospitalization, according to a city memorandum. Other Living Rooms offer support to residents throughout Illinois — but not previously in Evanston.

“What do we do for community members who are experiencing urgent mental health crisis?” Mayor Daniel Biss said. “The answer right now is pretty problematic.”

Evanston’s working on a new answer: a Living Room of its own.

The Living Room at Turning Point

When Living Room at Turning Point opened, it was the first of its kind in Illinois. Funded by a state grant, the facility serves adult guests at no out-of-pocket cost from 12 to 8 p.m. every day, including holidays. Guests can also make phone visits or arrange a Zoom by calling 847-933-9202.

A recovery support specialist onboards new guests and brings them to a private space. That’s a recent but important change, according to Corrie Teresi, Living Room’s director of community support.

“That means a guest comes in and they meet with only one person,” Teresi said. “They don’t have to share their story twice.”

Depending on the guest’s circumstances, the guest and specialist might work on relaxation, make a safety plan, do grounding exercises or take a walk.

Visitors can leave at any time, though Haggard said visits usually last about an hour. Hospitalizations happen only when there’s a physical medical issue or when the guest seems to pose an immediate risk to themself or others, Teresi said.

Living Room saw 303, 228 and 289 visits over the past three years, respectively. In recent months, however, Teresi said visits and calls to the Living Room have increased. According to Haggard, the center serves eight to 10 guests a day.

Currently, Evanston residents in mental health crises have few local options outside the emergency room — which can be expensive and ineffective.

Ald. Bobby Burns (5th) said he experienced that firsthand in his youth, when he went to the ER for anxiety attacks.

“After I became more aware of what I was going through, I understood I probably don’t need to go to an emergency room,” Burns said. “But it’s the only place I can go to feel safe and receive some type of care.”

While this has been true for years, the COVID-19 pandemic encouraged more conversations around mental health crisis management, said Castro, who is also a co-chair of Evanston’s Mental Health Task Force. Co-chair Christine Somervill agreed.

“All of these groups … recognized that there was this need to have help for individuals who are in crisis (to) not end up in the hospital or end up in jail,” Somervill said. “These groups all started talking about, ‘Hey, what about a Living Room?’”

As part of the deliberation process, members of City Council and the Mental Health Task Force toured nearby Living Rooms.

The federal American Rescue Plan Act of 2021 had allocated $43 million to Evanston to help with pandemic recovery. On March 28, City Council voted unanimously to allocate up to $900,000 in ARPA funding to start the Living Room.

Living Room is coming to a house outside AMITA Hospital. The building needs renovations to comply with Americans with Disabilities Act accessibility standards, among other upgrades, according to a city memorandum. In about a year, though, the center will open, the memorandum said.

In addition to peer-led interventions, the facility will partner closely with community organizations like PEER Services, which provides addiction support, and Impact Behavioral Health Partners, which helps with housing and employment.

While several organizations — including Impact and PEER — have offices in Turning Point’s Skokie building, they’ll be more closely integrated into Evanston’s Living Room.

Cain, the Living Room patient, said he got multiple jobs through Impact after being referred by Turning Point in 2012. Impact Director of Participant Services Chris Knoper, who has supported Cain, said Impact runs a zero-exclusion employment program.

“There’s been a long history of telling individuals who have a mental illness that they cannot work,” Knoper said. “Collaborating with the mental health services while we’re helping them find employment is the best way to make sure they’re successful.”

Richard Eddington, the interim chief of Evanston Police Department, said the department hasn’t yet finalized how it will work with the Living Room or other new mental health emergency responses.

Because ARPA is one-time funding, Biss said it only made sense to allocate the money because he thinks the city will find outside funding later — hopefully from the state grant that funds Skokie’s Living Room.

As Living Room gets closer to reality in Evanston, Turning Point CEO Ann Raney said she wants to follow the community’s needs.

Raney said she’s been planning for growth. When she toured Living Room’s Evanston future home for the first time, she said it felt like the best option. But was it the right place for Living Room?

“We might be outgrowing it in time,” Raney said. “One of the councilmembers said, ‘Well, that could be a good thing. So get in there and outgrow it, and then let’s see what happens next.’”