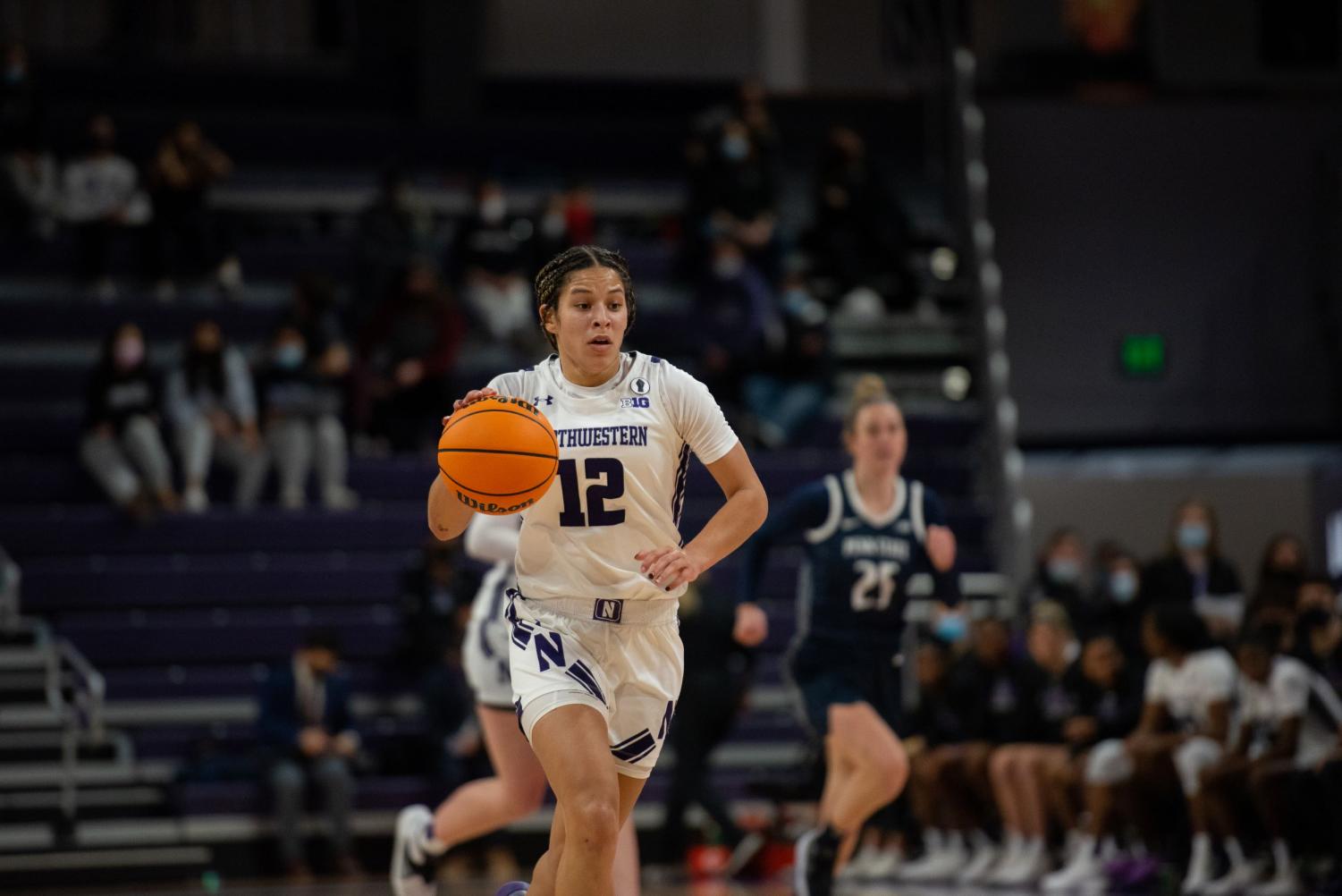 Veronica Burton dribbles down the court. The graduated point guard is three games into her rookie WNBA campaign.

The WNBA seventh overall draft pick, and first selection from a Big Ten school, steps on a new court for her rookie season

When the Dallas Wings chose Veronica Burton as their first pick at the WNBA draft in New York City on April 11, they gave her 48 hours to report to Arlington, Texas. She used that time to fly to Chicago and deliver hand-written thank you notes to the entire athletic department at Northwestern.

During her senior year at NU, the 5-foot-9 point guard led the Wildcats in points and the nation in steals. For the third straight season, she was named Big Ten Defensive Player of the Year. Burton was also a finalist for the Nancy Lieberman Award, which recognizes the best point guard in the NCAA.  A threat on both offense and defense, the seventh overall draft pick and first draftee from a Big Ten school adds versatility to the Wings’ roster.

Basketball seems to be in Burton’s blood. She’s the youngest of four in her family, and her two older sisters also played college hoops. When Burton was too young to be left at home by herself, her parents would drag her along to watch her siblings’ games.

“I was always the girl shooting at halftime or timeouts,” Burton said.

In high school, scouts weren’t knocking down her door. One of Burton’s few offers came from NU coach Joe McKeown, who saw her at a tournament and was impressed by her “competitiveness” and hustle. He invited her to campus and eventually convinced her to commit.

“I thought it was important that she knows she could just be herself and not be compared to anybody,” McKeown said.

It’s an underdog school in women’s basketball, which made it perfect for Burton, who said she likes that same quality about herself.

“You have to coach her to understand how valuable she actually is because she’s not flashy,” McKeown said.

McKeown, who attended the draft with assistant coach Tangela Smith, said Burton is quietly confident and calm, and both traits were noticeable even throughout the chaos of draft night.

Burton’s support system extends to her family. Burton said her parents have her back in times of need, and her siblings are her rock. They are the first to call after her best and worst games — and everything in between. Her mom, dad and older sister Kendall were with her at the draft.

Less than a week later, Burton was thrown into training camp for the upcoming season. But she was prepared. In the days leading up to her first practice, she said she watched old Dallas games so she could learn how to get her new teammates the ball. Smith, who played in the WNBA for many years before turning to coaching, said she was astonished by Burton’s commitment.

Burton’s devotion to studying game film is something she shares with football legend Tom Brady, who surprised her with a congratulatory call on draft night.

“He’s a student of the game, and that’s something I try to replicate,” she said.

Despite Burton’s preparedness, the first days of training camp made the senior feel like a freshman all over again. She dealt with nerves, soreness and a whirlwind of emotions. Despite the ups and downs, Burton said she was grateful for every opportunity.

“No matter how many minutes I’m playing, no matter what my role is, helping my team win is a huge goal of mine,” she said.

Eventually, Burton said she wants to become one of the best point guards in the league, but she knows that’ll take time.

In her first three WNBA games, Burton scored just four points coming off the bench. But her defensive contributions are already making a big impact for the Wings, as she secured four steals and ten rebounds in those minutes.

“My identity doesn’t come from my performance or whatever I do on the court,” she said. “It comes from my faith.”

Like many high-level athletes, Burton puts a lot of pressure on herself, which can lead to self-criticism and doubts. But reminding herself of her purpose helps Burton enjoy the moments as they come.

Smith, who served as a mentor to Burton during her time at Northwestern, gives her one final challenge: to exceed her own 15-year run in the WNBA.

“If anybody can do it, Veronica can,” she said.