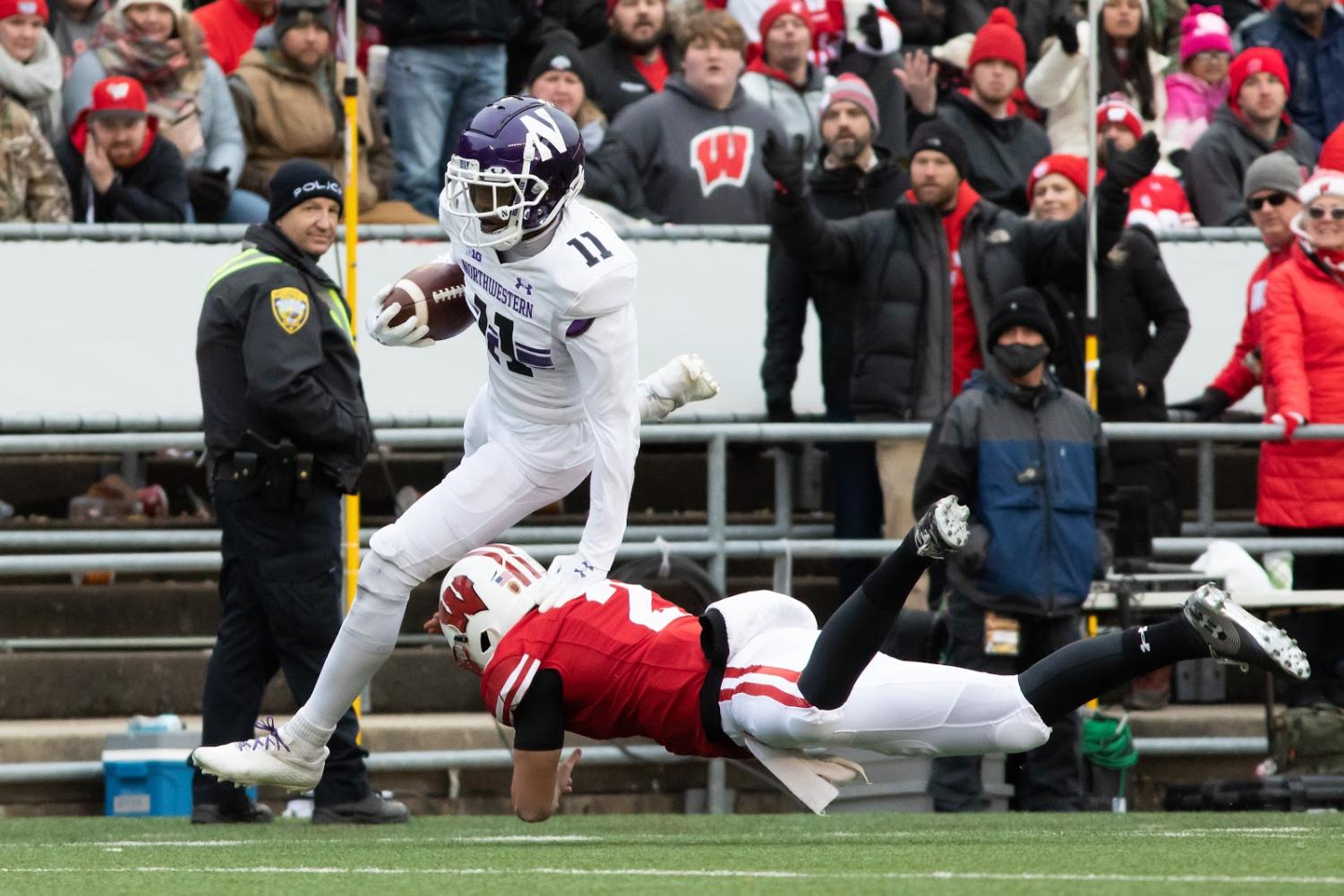 A.J. Hampton Jr. stiff-arms a quarterback to the ground to score a touchdown. The defensive back co-leads the Big Ten in pass breakups. (Daily file photo by Joshua Hoffman)

A.J. Hampton Jr. stiff-arms a quarterback to the ground to score a touchdown. The defensive back co-leads the Big Ten in pass breakups.

Football: A.J. Hampton Jr. goes from laughing in the locker room to locking down wideouts on the regular

Northwestern was on the road to its fourth-straight loss last weekend.

Down 35-0 to No. 18 Wisconsin in the fourth quarter, the team searched for a solution to avoid its first shutout of the season. Luckily, junior cornerback A.J. Hampton Jr. was there to answer the bell. At the beginning of the fourth quarter, he picked up the loose football that sophomore linebacker Xander Mueller forced out and proceeded to high-step his way into the end zone for a 49-yard scoop and score.

Sending Wisconsin quarterback Graham Mertz down to the ground after a stiff arm with his left hand, Hampton Jr. celebrated his first career touchdown with shoulder bumps and helmet taps from his reenergized teammates.

“I just put the ball in the end zone and partied with my defense,” Hampton Jr. said. “We always preach on defense, ‘We got to score as defense, we got to help our offense out.’”

Putting the Cats on the board for the first time the entire game, Hampton Jr.’s play reflected his competitive edge and desire to support his team. It also boosted his already impressive 2021 resume. The secondary’s vocal leader co-leads the Big Ten in pass breakups with 11 — a top-10 mark in the country. Even though there are potentially just two weeks left in NU’s season, Hampton Jr. is likely en route to an All-Big Ten finish.

“I’m happy to see that all his hard work is paying off,” defensive backs coach Matt MacPherson said. “I’m not surprised by it because he has great work ethic and a lot of commitment and focus.”

Hampton Jr. was your typical freak of nature coming out of high school. The Paul R. Wharton High School graduate managed to throw dimes at quarterback, run circles around opposing defenses at running back and lurk in the secondary at defensive back.

The Arkansas native was a three-star recruit, and he committed to Toledo. But a few months later, Hampton Jr. switched his future destination from Ohio to Illinois, decommitting from the Rockets to join the Wildcats’ 2018 recruiting class.

Hampton Jr. said he came to NU in part because of coach Pat Fitzgerald’s 40-year plan, but also for academics.

“Obviously, we all would love to play football for the rest of our lives, but my dad’s a football coach too,” Hampton Jr. said. “He always says, ‘You can only play football for a little bit, because the NFL stands for Not For Long.’”

The junior let go of his offensive toolkit entering NU. He focused strictly on the defensive side of the ball. That allowed him to hone his craft and receive playing time in three games as a freshman. But he also got to work side by side with players like cornerback Montre Hartage, safety J.R. Pace and 2021 NFL first-round pick cornerback Greg Newsome II, who co-led the Big Ten in pass breakups (nine) last year.

Hampton Jr. said those “old heads” in the secondary room helped him grow his confidence and stay alert.

“They really took us in and taught us how to watch film, how to do the little things first,” Hampton Jr. said. “Most of us could play football when we got here … but it’s really the process and how you go through your week and your day, building up to game day.”

Taking pages out of past players’ books (he cites Newsome II’s unwavering confidence and Pace’s consistent trash talk as inspiration), Hampton Jr. observed his teammates’ game and developed his own. While doing so, he stepped into a larger leadership role for the Sky Team as one of the group’s veteran members. By this point, Hampton Jr. was becoming the “old head.”

Although he misses his mentors, Hampton Jr. believes in the “new guys step up, new guys take over” mindset and has confidence in his partners this season.

“(Sophomore safety Brandon Joseph) says if he isn’t leading in interceptions, then one of us needs to be leading in something,” Hampton Jr. said. “We all want to be the best and we all, 100%, want to go to the league.”

“The energy guy” for the defensive backs, Hampton Jr.’s charisma and fun aura shine brightest when he celebrates with his teammates after a big play and his dance moves grace the program’s social media accounts after victory.

“It makes everyone better collectively as a team and makes everybody want to compete,” Larkin said. “The defensive backs talk about, ‘What do we want to be? And what is our standard?’ and one of them is being the energy group. He’s definitely the energizer.”

MacPherson added that Hampton Jr.’s presence inside the white lines reflects his strong daily work ethic and passion for the sport. Even when the goings get tough, the vocal leader  provides the spark of energy that fires the team up.

Coupling this encouraging vibe with continuously solid performances and bettering his craft every outing, Hampton Jr. backs up the smack talk. Behind his passion, enthusiasm and consistent production, Hampton Jr. has filled a leadership role for the Wildcats not only for the defensive back room, but the entire team as well.

“If energy is low, A.J. is going to bring it up,” MacPherson said. “You feed off that, you know, not only as a player, but as a coach. You see it and you go, ‘Ok, if he can be that way, I need to get my sorry butt going and feed off of that energy as well.’”

Ahead of the Friendly Confines, Hampton Jr. and the secondary need to prepare for not only an offense with the second-most passing yards in the conference, but also the Big Ten leader in receiving yards, wideout David Bell.

Despite a tough matchup ahead, the Cats’ secondary has proven to be formidable. The group has had a hand in at least one of the team’s takeaways in seven of the 10 games this season. In the other three contests, NU collectively has had one forced turnover.

“Just trust ourselves, go out there and play fast, play for each other. That’s the biggest thing,” Hampton Jr. said.

From entering as a three-position threat to becoming one of the country’s most sound defensive backs, Hampton Jr. has made huge leaps from his “thrown-into-the-fire” first year. The junior is building a name for himself. And he’s ready to flex his signature pose of putting his hands behind his back a few more times after clamping up another wide receiver before the season’s end.

“He’s just had a spectacular career,” Fitzgerald said. “Freshman year is not easy, and then to be thrust out there on the field in the arena makes it even that much more challenging. I think he’s responded, he’s worked his tail off, he’s got a high energy.”