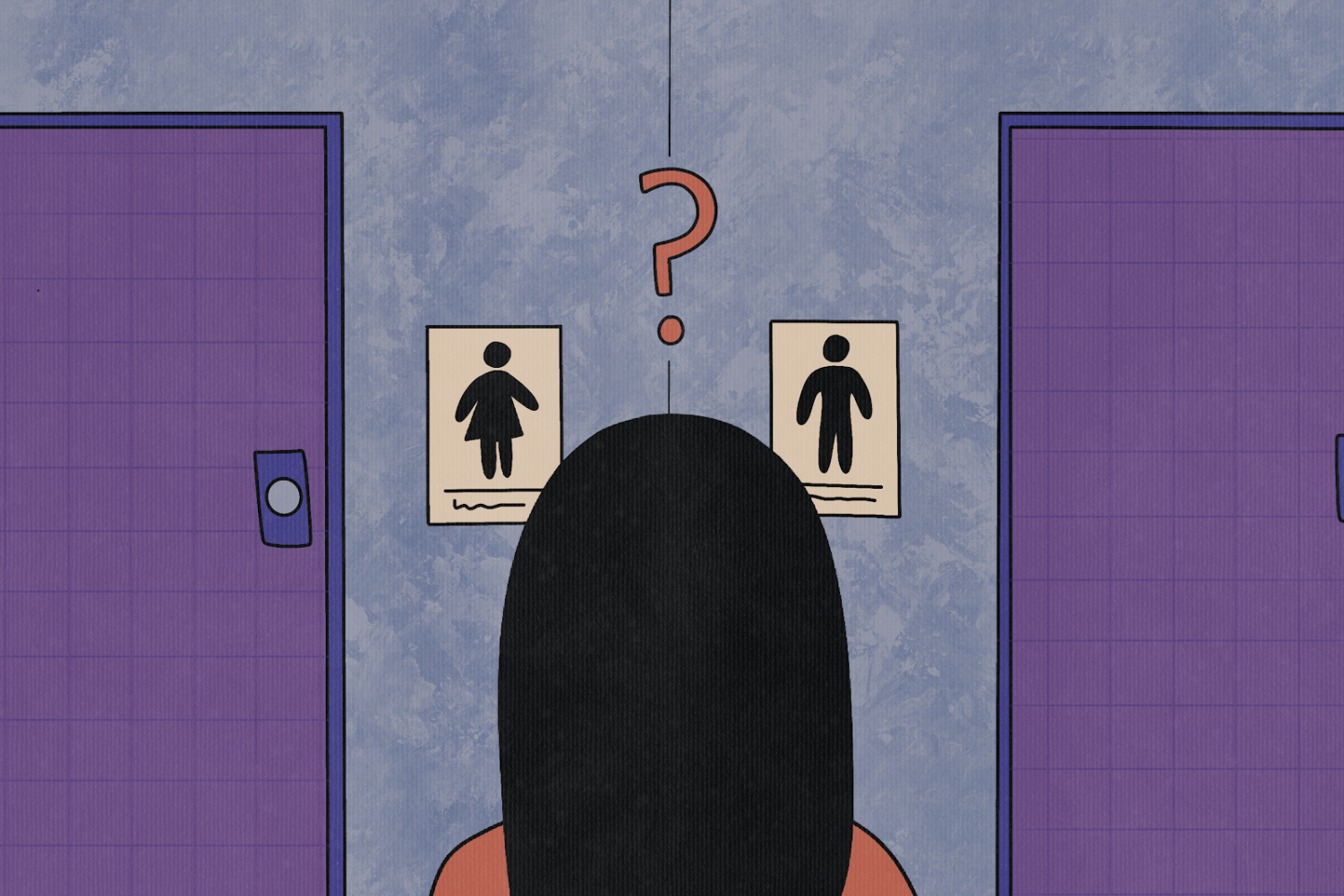 ‘You have to make a choice’: Non-cisgender students still struggle to find gender-affirming on-campus housing

When Communication junior Jo Scaletty filled out their freshman year housing form, they faced a difficult decision: Should they live somewhere that affirmed their queer identity, or somewhere with the close-knit community they sought as an incoming student?

All gender housing sounded like a queer community that would help them explore their identity. But the only all gender option they were seriously considering was in Allison Hall. That residence hall was too big, and it didn’t thematically align with their academic interests, unlike the residential colleges they were considering.

Out of more than 30 dorms on campus, Residential Services currently lists eight dorms with all gender housing: five on North Campus and three on South Campus. With such a limited selection, non-cisgender students are often presented with Scaletty’s impossible choice.

On top of social and cultural considerations, some non-cisgender students navigate significant accessibility barriers and a housing portal system that often invalidates gender identity. NU students and faculty have advocated to expand all gender housing on campus for years, but many say substantial change isn’t happening quickly enough.

After handwriting a list of pros for each residence hall, Scaletty applied to the International Studies Residential College, or West Fairchild, which didn’t offer all gender housing at the time.

“When you’re a first year coming into any new space, you want to go somewhere that you think you’ll feel safe,” Scaletty said. “(West Fairchild) to me was more of a risk.”

Scaletty expected to move into co-ed housing in West Fairchild. But when they moved in that fall, they realized they were on the women’s floor.

They were scared they made a mistake.

“I was like, ‘Oh, so if you don’t choose gender-open housing, Northwestern is just going to assume whatever they want about you. And there’s nothing you can do to stop that,’” Scaletty said.

How housing culture at NU plays a part

Several non-binary and transgender students told The Daily the lack of options on South Campus confused and deterred them from living in any all gender dorms.

South Campus has a reputation as a more affirming environment for queer students and having a larger queer community, Bienen freshman Eli Oesterheld said. They said North Campus feels “more hostile” because of the heavy presence of fraternities, among other reasons. But choosing between the three options for all gender housing on South Campus felt limiting to Oesterheld.

For many students ranking dorms, the social environment plays an important role. And they say the social options for non-cisgender students on South Campus are limited at best.

Some students regard Foster-Walker Complex, known as Plex, as a second-year dorm where freshmen should avoid living. Some students also find West Fairchild to have too niche an appeal as the International Studies Residential College. The only other option on South Campus is the singular all gender wing of Allison Hall, which has 18 rooms.

Location isn’t the only accessibility issue for all gender housing. The majority of all gender rooms are singles, which can cost over $2,000 more than doubles in the same building. Until fall 2019, the only all gender housing options were singles and suite-style arrangements in Plex, Kemper and 560 Lincoln, which were all significantly more expensive than on-campus doubles. Some all gender housing, such as a suite in West Fairchild, isn’t wheelchair accessible.

As a low-income student, Scaletty said they weren’t personally forced to choose between intersecting identities when applying for housing. But there was “no way” they could have afforded gender-open housing if singles were their only option, they added.

“The intersectionality of being any of these things — being disabled, being low-income, being anything — and also being non-binary, trans (or) gender nonconforming means that, at least as it stands today, you have to make a choice,” Scaletty said. “And that is really difficult.”

Communication freshman Elliot O., who chose not to use his last name for privacy concerns, is a transgender man. When he and his chosen roommate filled out their housing application, the housing portal wouldn’t let them submit it because the form said they held different gender identities — even though he selected male on the form.

Elliot said he and his roommate emailed Residential Services and resolved the problem relatively easily. But when they arrived on campus, they realized they were placed in the women’s wing of the floor.

He said his room is right across from the women’s bathroom.

“Intellectually, I know it’s small and it’s slightly inconvenient,” Elliot said. “(But) it’s not just the logistical inconvenience. It’s this way that the school and their systems don’t see me the way I see myself.”

Another transgender man, George A.* (who chose a pseudonym for privacy concerns), said he selected male on his housing application but was placed on a women’s floor.

Before moving in, George emailed Residential Services to confirm he would live in a gender-affirming space and discovered his placement. After a brief email exchange in which Residential Services offered him a choice between living in Allison’s all gender wing or Plex, he chose a single in Plex.

Weinberg freshman Ris Carter also had problems filling out the housing application last spring. Carter and their roommate both indicated they are non-binary, but the application wouldn’t let them submit the form with each other selected as roommates because they were assigned different sexes at birth. Residential Services resolved the issue after an email exchange, they said.

The housing office assigns living situations based on the preferences students select on their housing application, according to Jenny Douglas, interim director of operations and services for Residential Services.

“One of our tenets is to only place students interested in all gender housing in such communities,” Douglas wrote in an email to The Daily. “It would be a disservice to the environment to randomly assign students who may not positively contribute.”

Carter lives in GREEN House, a special-interest housing option organized around the theme of sustainability, which is listed as all gender housing on the Residential Services website. But Carter’s wing has exclusively gendered bathrooms.

To feel more comfortable, Carter put up their own gender-neutral signs over the official bathroom signs. They said they gave their floormates notes explaining why they changed the signs, asking them to reach out if they felt uncomfortable. No one seemed to have a problem, they said.

But Carter said someone has taken down the signs several times. They said access to gender-affirming bathrooms has been an ongoing struggle throughout their first few months on campus.

“It’s definitely made me think that they’re not as inclusive as they paint themselves to be,” Carter said. “They talk a lot of big game, but there’s not a lot actually being done to include non-binary and gender non-conforming people.”

Other dorms have had similar incidents. At the Communications Residential College, second-floor residents unofficially designated one of the bathrooms as gender-neutral. But according to Communication junior and CRC resident Gwen Giedeman, a South Area residential director instructed them to take down the signs.

Giedeman said it wasn’t about the bathroom itself, but the sign. Most signage in residence halls needs approval from Residential Services. They said the next steps would be to apply for part of the floor to have an official, authorized gender-neutral bathroom — a process she doesn’t know how to navigate.

“I have literally looked online trying to figure out what it is,” Giedeman said. “I don’t think it’s something that you can easily find as a student, which I also think might be a problem.”

After a 10-month process, Residential Services gave approval for West Fairchild to convert a suite of rooms and two restrooms into all gender housing for the 2021-22 academic year. The effort was in part led by Scaletty.

West Fairchild’s executive board held a community dialogue to gauge what residents wanted, according to Aaron Klobnak, a Weinberg sophomore and the residential college’s president. They held a final vote at the start of Spring Quarter last year. The majority of residents supported an all gender suite with gender-neutral bathrooms.

Scaletty said the only strict guideline Residential Services gave them was to prove that a majority of residents supported the proposal. Klobnak said emailing Residential Services, which he and other executive board members did constantly during this process, was a “headache.”

West Fairchild executive board members said they want Residential Services to publicize a formal, standardized process to guide other dorms who want to expand all gender housing options, too.

“We didn’t have a template because the template didn’t exist,” Scaletty said. “It was hard the first time, but it can be easier going forward because now we have a blueprint.”

Sociology and Gender and Sexuality Studies Prof. Héctor Carrillo co-led the University’s Gender-Queer, Non-Binary and Trans Task Force from 2018 to 2019. The task force presented seven recommendations to the University, including one devoted to providing non-cisgender students with “safe, comfortable and gender-affirming housing.”

At the time, the only all gender options for students were singles, which Carrillo said was accommodating but not affirming. He added that representatives from Residential Services were receptive to feedback and took swift action to make their website descriptions more inclusive to non-cisgender identities.

While Carrillo felt this was a hopeful sign, he said there is still room for improvement. He said students should find and connect with Residential Services staffers who have pushed for housing progress in the past to advocate for more inclusive policies in the future.

“It’s clear that change is on the way, but not complete,” Carrillo said.