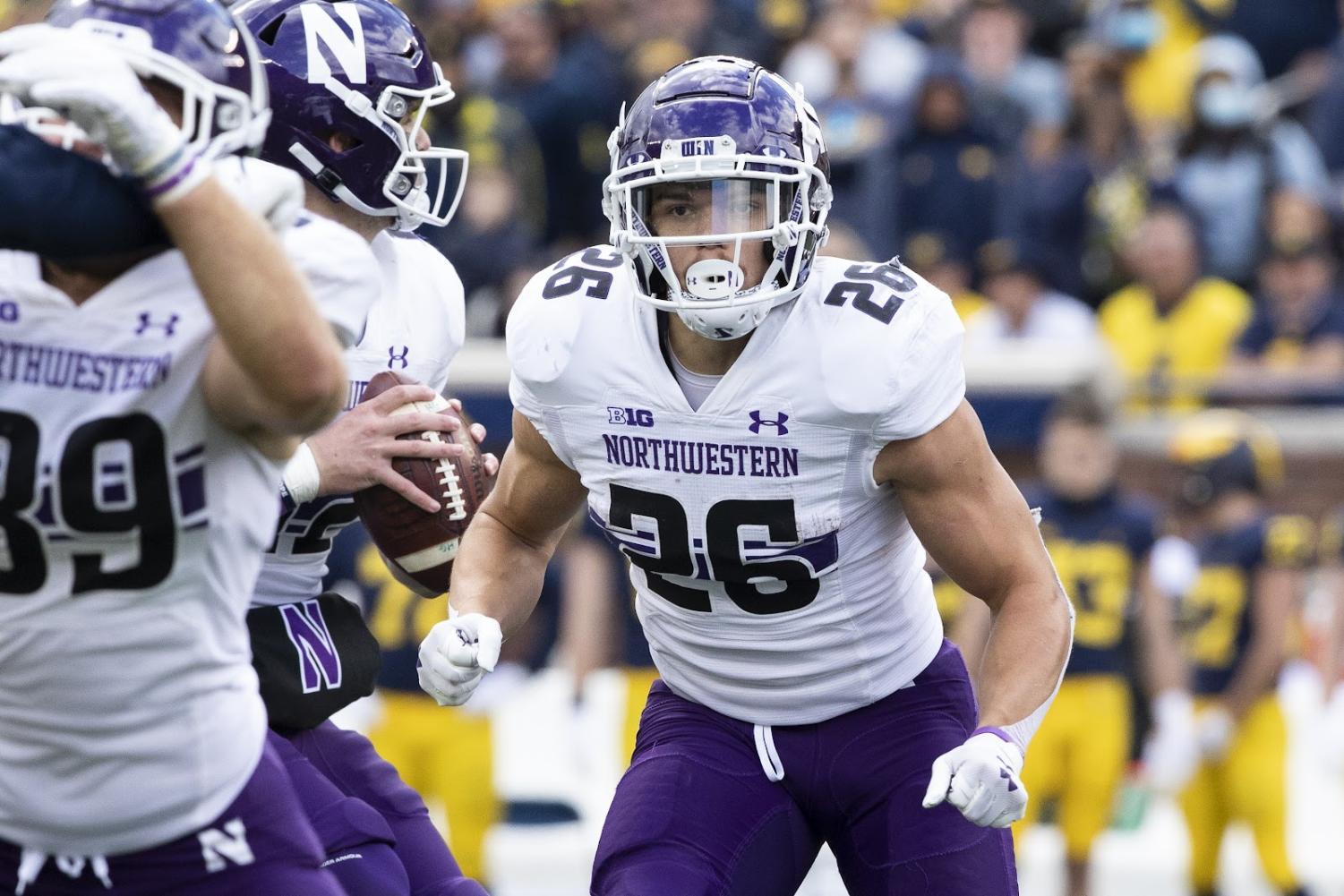 Football: Evan Hull searches for answers on the ground as Northwestern’s season progresses

It seems unreal at first glance — the kind of college football statistic that pops up on occasion and demands a double take. But the numbers are correct, and they are a microcosm of Northwestern’s season.

Sophomore running back Evan Hull has rushed for a career-high 643 yards in seven games this season, the fifth-highest total in the Big Ten.

A little over 25 percent of those yards — 165 in all — have come on two scrimmage plays.

Like the Wildcats, Hull’s performance has been up and down this year. At times, the Maple Grove, Minn. native has showcased a penchant for big plays. A particularly prolific day against Ohio led coach Pat Fitzgerald to suggest further success would put him “in the conversation of being an All-Big Ten back.”

On other occasions, though, opponents have held Hull in check. The 75-yard touchdown run in the second quarter that provided NU’s only score of the afternoon notwithstanding, Michigan limited him on Saturday to six yards on five carries. His second-longest runs of the day were a pair of two-yard pickups early in the first and second quarters, although he did take sophomore quarterback Ryan Hilinski’s pass 26 yards on third and 16 early in the third.

Hull was not widely projected as the Cats’ top running back entering the 2021 season. That honor was supposed to fall to sophomore Cam Porter, who gashed Illinois for 142 yards in the 2020 regular-season finale as a true freshman and added 98 more against Auburn in the Citrus Bowl. Porter, however, sustained a lower-body injury in fall camp and NU ruled him out for the season on Aug. 17. The Cats pressed the veteran Hull into service atop the depth chart for the opener against Michigan State.

Results were mixed: Hull was only marginally involved in the first half against the Spartans, carrying the rock just once for two yards in the second quarter. He wound up with 87 yards on the ground to go with 23 receiving yards, but Fitzgerald told reporters after the game that Hull was nursing a lower-body injury suffered in camp.

“It was a matter of just easing back into it (after my injury),” Hull said. “I was gaining confidence with every carry. I just had to take it slowly.”

Gradually, Hull’s role increased. He burned Indiana State for 126 yards and two touchdowns, and registered a career-high four catches in the loss to Duke. Then came his 2021 coming-out party against the Bobcats: 216 yards (his most since 2019) and two touchdowns, headlined by NU’s longest run since 1961. Hull’s 90-yard gallop came just two minutes and two seconds after his other rushing touchdown, a 17-yard score that put the Cats ahead 7-0.

“It built confidence for the entire offense,” Hull said of his banner day. “There have been some plays in previous years where I’ve been caught before I was able to finish a run like that. To finally finish one was a great opportunity.”

Hull’s explosion against the Wolverines is his only touchdown since the Ohio game. Nebraska clamped down on him for just 31 yards on seven carries. Against Rutgers, he turned a career-high 25 carries into just 53 yards.

Some of NU’s intermittent rushing futility may be attributable to injuries and struggles on the offensive line. Senior offensive lineman Sam Gerak, who has been around long enough to have blocked for long-departed quarterback Clayton Thorson, emphasized the Cats’ need to get back to fundamentally sound line play. He cited Hull’s big run against Michigan as plays that the offensive line needs to help sustain.

Meanwhile running backs coach Lou Ayeni singled out consistency as a point of emphasis for NU’s running game, a unit in need of shoring up ahead of a difficult closing stretch.

Though numerous backs have seen carries for the Cats this season — freshman Anthony Tyus III and graduate student Andrew Clair each have over 200 yards, respectively — Hull has unquestionably been the focal point, and has won effusive praise from his teammates and coaches for his day-to-day conduct.

“(Evan) has taken everything we’ve coached him on here and applied it not just to football but to his life,” Ayeni said. “He’s taking his work ethic, and learning the schemes and the culture and what it means to be a great player.”

Tyus III added that Hull has been a mentor to the running back room and the team as a whole because of his great attitude and energy.

Hull will get another chance to shine against Minnesota, his hometown team, against which he amassed 51 yards in a losing effort in 2019. He has come a long way since then, and is focused on living up to NU’s expectations both on and off the field.

“I didn’t always have people to show me the right way to go about things … so if I can, I show a younger guy how to do things better and build him up,” Hull said. “It’s a great opportunity, not only for him, but for the collective group.”

— Football: Wide receivers ready to step up against Minnesota following injuries to Kirtz and Robinson Jr.